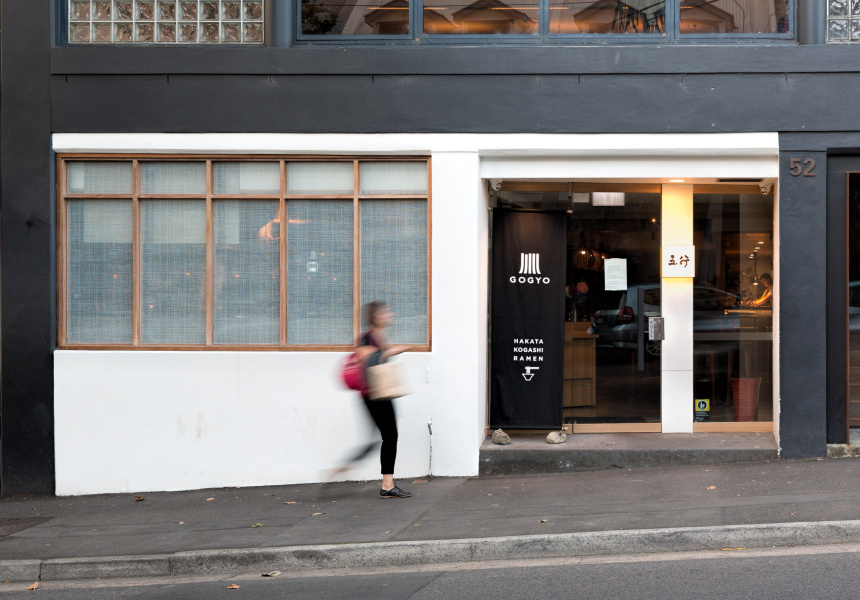 One slurp of the ramen at Gogyo and you’ll feel like you’re in the backstreets of Tokyo. It’s owned by Chikaranomoto Global Holdings (which is also behind Ippudo Ramen in Sydney). Currently there are three Gogyo branches in Japan, one in Hong Kong and as of January 2018, one here.

With over 80,000 ramen restaurants in Japan, to stand out from the pack you have to be good. Gogyo’s ramen master and founder, Shigemi Kawahara, broke with Japanese traditions in 2003 by burning the hell out of the miso. Deliberately.

And so kogashi miso was born. Meaning “charred” in Japanese, the method originally hails from Hakata, the ramen capital of Japan, and is made by over-heating lard in a wok, then adding miso paste or a special soy base (there are two kinds), followed by chicken broth. It’s then topped with chashu (barbequed pork), cabbage and a flavoured egg.

There’s also a more traditional tonkotsu ramen on the menu, made from a 24-year-old recipe. It uses simmered pork bones. You can also try kogashi shoyu; chilli shoyu (made with habanero pork mince, tomato and coriander); and a subtle soba-noodle dish with vegetables. Choose to season your ramen with bamboo shoots, roasted seaweed, spring onions and pork belly chashu (a type of marinade and braise).

The 80-seat restaurant was designed by Paul Kelly, who also had a say in the sculptural bowl your ramen arrives in, and the Japanese baskets you place your jacket in on arrival. Wicker lamps hang from the ceiling, and the timber tables and chairs give the concrete-and-brick space warmth. If you can, watch the theatre from one of the counter stools around the bar.