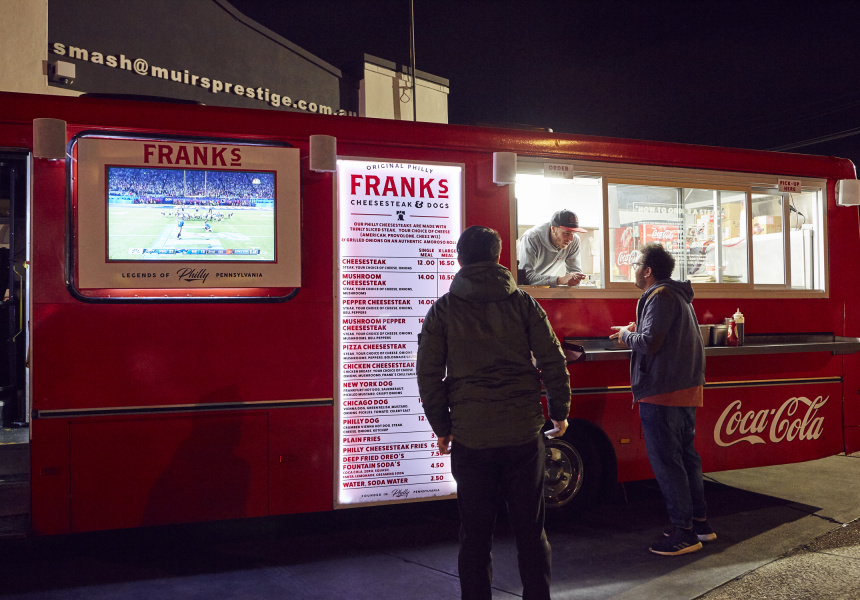 To get to Frank’s Philly Cheesesteak bus in Haberfield you have to walk by Mister Gee burger truck. On a cold night when the icy wind whips down Parramatta Road, you might cast a wistful backward glance at the blazing heat lamps at Gees. But keep going. An extension of its Wetherill Park store in Sydney, the Frank’s “mobile” take on the Italian-American snack is worth your time, plus it’s hard to come by in Sydney.

A vintage Mercedes – painted with sports regalia and a mural of the Pope, and Sylvester Stallone as Rocky – is parked before milk crates (which double as tables topped with wooden planks). A flat screen, which plays baseball games, has been built into one side of the car.

The long, soft hoagie roll stuffed with meat, onions and cheese, is served hot and twisted tightly in paper so none of the juice can escape. Frank’s cheesesteaks are authentic and rival the versions found in the sandwich’s native Philadelphia – in fact, the soft-as-a-cloud white rolls are imported from there.

Each of Frank’s six variations start with the same base: two-millimetre-thick chunks of rib eye, fried onions and Cheez Whiz (a processed cheese sauce).

The sautéed-mushroom variety is a delicious choice, as is the pepper (capsicum) cheesesteak. The ultimate is the pizza-cheesesteak, which is topped with bolognaise sauce. Hold the scepticism – it’s the ultimate fusion of America and Italy and, surprisingly, it works.