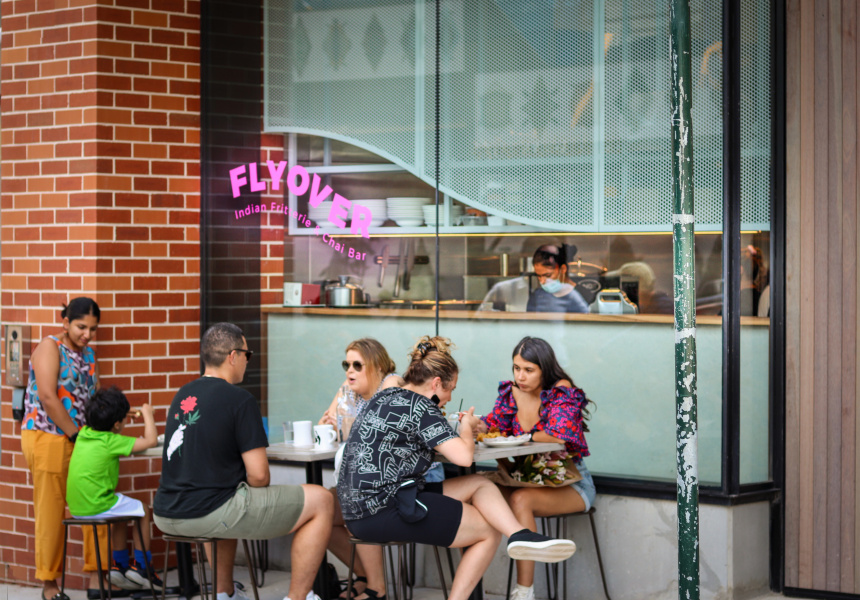 When Gunjan Aylawadi first opened Flyover Fritterie, a tiny hole-in-the-wall eatery at the end of Temperance Lane in the CBD, it quickly became known for its four-item menu – featuring three types of pakora and a chai, plus weekly specials.

The Indian street food-inspired diner has sinced moved to a bigger space in Redfern, spanning two levels with plenty of seating, table service and a mostly vegan menu that goes far beyond the original four staple menu items.

The expanded offering showcases Indian cooking in an approachable way, and is a little different to what’s found at most takeaway spots around town. As well as the eatery’s signature seasonal vegetable deep-fried fritters, there’s a colourful and texturally pleasing aloo tikki, a fritter usually served at Indian wedding. It’s a crispy hash brown-like potato fritter stuffed with spicy chana dhal and topped with sweet house-made tamarind and mint chutneys, and sprinkles of pomegranate, ginger and beetroot.

Other dishes include a snacky jaffle with rotating fillings such as potatoes and peanut chutney, as well as bowls of khichri (lentil stew) topped with sabzis (vegetables with spices), crunchy fritters and house-made chutney.

Look out for specials that will pop up to mark various Indian festivals. And, of course, there’s a constant flow of Flyover Fritterie’s specially brewed chai with chocolate or ginger and cardamom available to be enjoyed hot or cold.