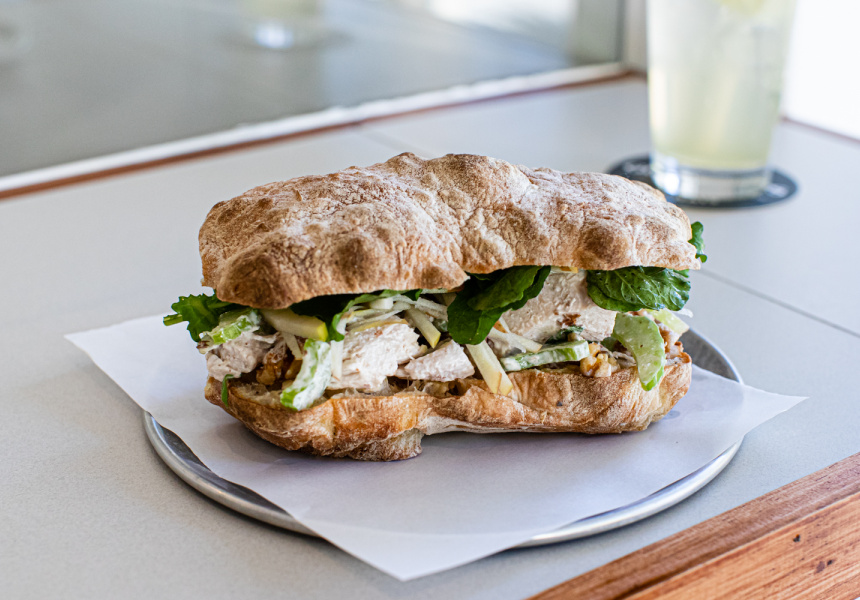 Not too many sandwich shops have kangaroo mortadella on the menu. And most bakeries don’t use wattleseed in their gluten-free brownies. But Good Ways Deli isn’t like most. The new corner cafe, deli and bakery is an inclusive riff on Australiana, drawing on country bakeries, school canteens and the Country Women’s Association to mastermind its sandwiches and treats, and using native ingredients and goods from top producers to realise them.

Co-owner Tom Pye is on coffee and service duty; he spent six years working his brewing magic at Coffee Supreme. Good Ways’ other owner and chef Jordan McKenzie lists Cornersmith, Orana Sydney, Small Talk and Cho Cho San on his CV, and influences from each (the native ingredients used at Orana, Small Talk’s bakery-cafe model) are evident here. But this is no pastiche of venues past.

On the short but sweet menu are five staple sandwiches, and one regularly changing special. There’s the very (very) good kangaroo mortadella sanga, with white onion, “hot” butter (butter mixed with onion, white soy, lemon juice), fermented chilli and dressed broadleaf rocket. And the chicken sandwich is a step above the supermarket roast chook and coleslaw numbers you had at picnics back in the day: it’s made with poached chicken, walnuts, celery, mayo, apple and dressed rocket. The mortadella and chicken have been sourced from Marrickville’s Whole Beast Butchery, while the saucisson is from La Bastide. Everything else – the spreads, the pickles and the bread itself – is made in-house by Good Ways.

The beans are by Coffee Supreme, and there’s a bakery cabinet filled with upper-crust, house-made classics: lamingtons, Anzac biscuits and superlative Vegemite-and-cheese scrolls, made with Maffra matured cheddar.