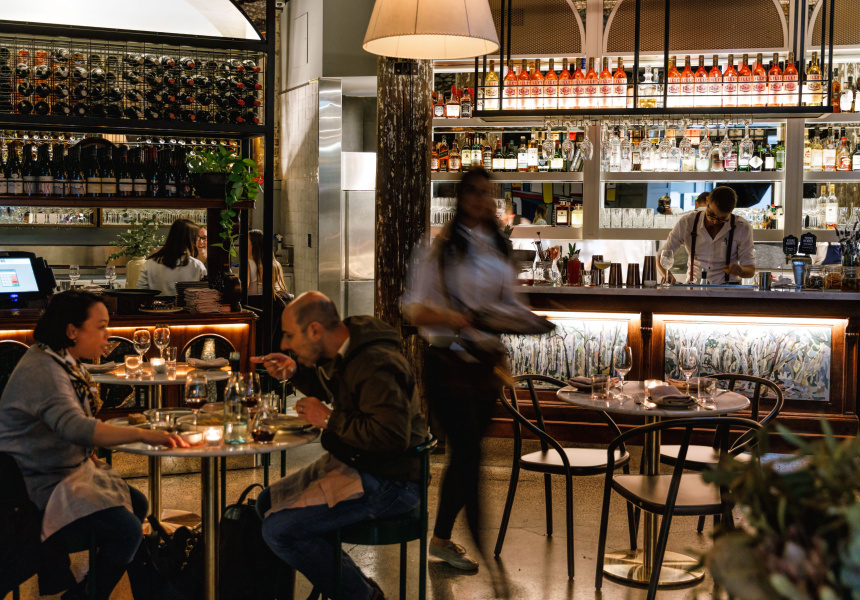 Before Pyrmont became the affluent suburb it is today it was an industrial slum. In the 1860s it was a wool-handling precinct and home to Victorian-style wool stores. Ovolo 1888 Darling Harbour boutique hotel is one of those buildings. It’s also where Percy Ewart worked as a wool classer; his name remains engraved in one of the hotel’s sandstone blocks. And Mister Percy is a Euro-style wine bar in the hotel lobby.

The interior makes the most of the building’s history; much of the timber has been left raw to give it an industrial warehouse look. The building’s block-wedged atrium structure features upcycled 19th-century Venetian-style furniture and artwork by Sydney artist Oliver Watts, who used gumtrees as inspiration. There are plush armchairs, oversized fabric and leather lounges, and a mix of marble and timber bistro tables and chairs.

Most of the wines from the 100-strong list are Mediterranean-style varietals with a bent towards small, local, up-and-coming producers, and come inquartino (250-millitre pours).

There’s also a sizeable selection of aperitifs, digestifs and cocktails. One of its signatures is Pablo’s Party, made with chamomile-infused Espolon tequila, peppercorn agave and lime.