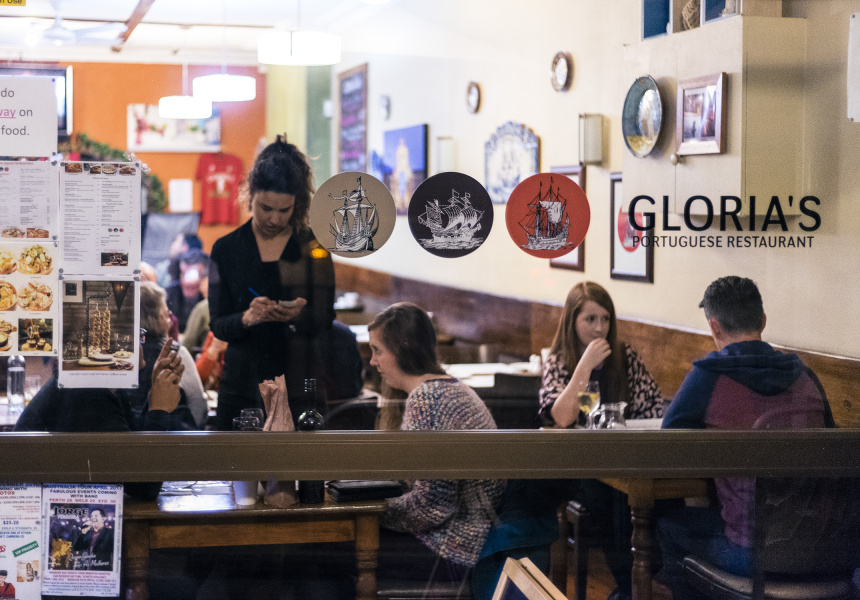 Before Frango’s, Silva’s or Sweet Belem opened in Petersham, there was a Portuguese accountant. Maria Gloria Belinha used to do her tax there.

One day she was waiting for the accountant and went out for a coffee. There was no coffee and no Portuguese food, so Belinha – a cleaner and single mum without much money – decided to risk everything and do it herself. She opened Gloria’s in 1988. Little Portugal has grown up around it.

An old photograph of the place shows it has kept much of its old tavern-style charm. The only real difference is that no one smokes indoors anymore. The menu’s changed over time. Dishes such as dobraba (tripe-and-white-bean stew) or chicken pipis (chicken giblets and hearts cooked in red wine) are now only available via pre-order. But the classics, such as feijoada (a red-bean, pork, beef and chorizo stew with rice) and alentejana (fried pork, clams, capsicum and coriander on a bed of cubed potatoes), are still on pretty much every table.

You’ll hear “woah” a lot when they come out – everything here is either huge, hearty or both. It’s the kind of food you can imagine craving either post-marathon or mid-hangover, which makes sense – this is the food you’d find farmers and workers eating in a Portuguese tavern.

Unless you’re about to rupture (which is likely), ask for dessert. Before moving her family to Australia, Belinha was a pastry chef. She’s no longer at the restaurant (her son Alcino de Sá runs it) but her recipes for pastel de nata (Portuguese tart) babas de camelo (dulce de leche pudding) and natas do ceu (like a trifle of cream, crushed biscuits and sweetened yolk) remain.