A Ramblin’ Ode to Cognac

The guys at The Ramblin’ Rascal Tavern want to introduce you to (or further your relationship with) Cognac. It’s an invitation you shouldn’t turn down. 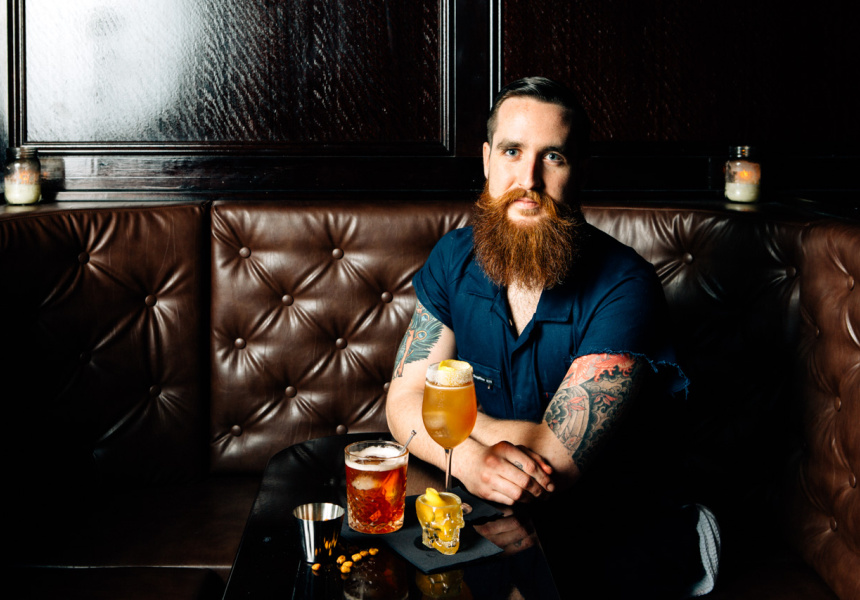 There are recurring themes at the bars opened by the Swillhouse group (Shady Pines Saloon, Frankie’s Pizza, the Baxter Inn), but by no means are they uninspired repetitions. At these venues the low-lit, broody vibe; loud music spanning generations, good-looking bar staff, plush red carpets and dark wood all set the tone for a decadent night. Then add craft beer and pizza at Frankie’s, whiskey at Baxter Inn and now Cognac at recently opened Ramblin’ Rascal Tavern on Park Street. Although owners Charlie Lehmann, Sebastian ‘Cosmo’ Soto and Dardan Shervashidze have gone out on their own with this venture, their background is echoed in their new bar.

These bars also prioritise an educational experience over mindless drinking. Here the bartenders are exceptionally well informed and passionate; you’ll probably try something new and learn along the way. “People don’t really know about [Cognac], people think it’s fancy and you have to have a lot of money to drink it, but that’s not true,” Lehmann explains. “We want to make it approachable but also respected. Baxter [Inn] did that with whiskey and we want to do that with Cognac.”

Put aside your images of Cognac and cigars. “We often shoot Cognac,” Lehmann says. “We want to guide people to drink a good drink and a good Cognac, but if some people find the process too arduous, we might recommend a shot. If people want to be walked through the process, and try a few different cognacs, we’d start neat, maybe add some water or ice if it’s a little too much.”

“That whole warming of the glass, holding it in front of the fire, is a film noir thing. Cognac is fantastic when you can have it in warm drinks but there is no definitive way to drink it,” Lehmann says.

A quick crash course on the spirit: Cognac is brandy (but not all brandies are Cognacs). It’s a grape-based spirit, only made in the Cognac region in the south-west of France. Makers start with the grape-based spirit, or eau de vie, and barrel it. It takes a minimum of two years of barrelling before the spirit is considered an initial Cognac. Different eaux de vie are then moved into a large glass vat and blended to become the final product. Within the Cognac region there are six smaller regions from where grapes can be harvested. Some eaux de vie sit in barrels for 100 years, some for six. It’s made in a very specific way and regulated – it can only be called Cognac if it comes from this region.

As well as serving the spirit neat, Ramblin’ Rascal Tavern has a list of excellent Cognac cocktails. “The classic recipes are from the 1920s and ‘30s because that’s when it became big. A lot of them originate from New Orleans because there were a lot of French in the South at the time,” says Lehmann.

One of the cocktails served here is the Brandy Crusta, which can sometimes be confused for the Sidecar. In a drink like this one, Cognac Martell VS is used; “It’s young, it has a lot of citrus notes which works well with the lemon and Cointreau,” Lehmann says. In another such as the Vieux Carre, a classic American drink using rye whiskey, invented in the New Orleans in 1937, Courvoisier (a heavier Cognac with notes of woodiness and cinnamon) is used. “The rye is very spicy so [the Cognac] will mellow it and make it more palatable. It will sit in your mouth for about half and hour after your drink it.”