Hugo’s Bows Out Of The Cross

This weekend is your last chance to party at Hugo's. 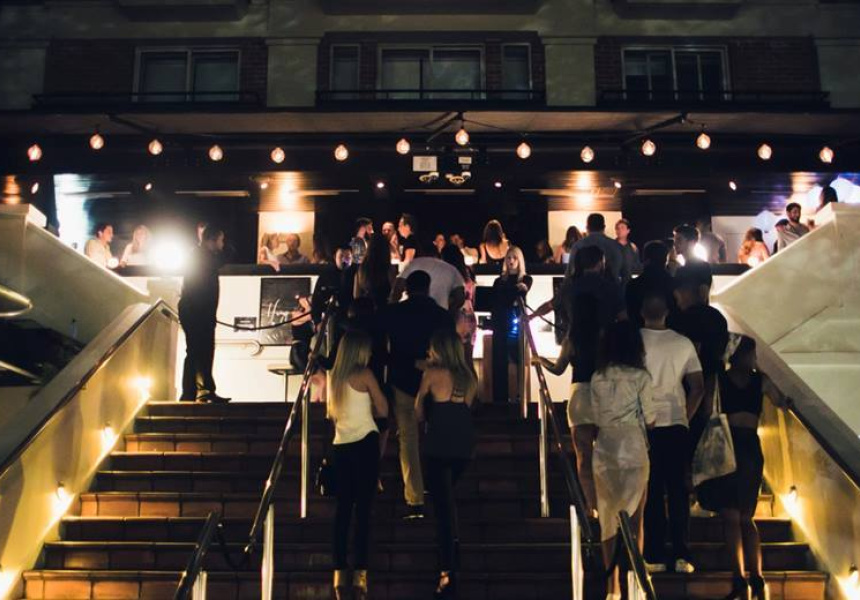 If you take a walk through Kings Cross right now, it’s starting to look and feel different. Small bars and restaurants are creeping out from their hiding places in Potts Point, snaking into Llankelly Place, Kellett Street and beyond. You don’t see many addicts, strippers or prostitutes. You also don’t see any artistic types, musicians, aspiring promoters. That busker isn’t on the corner of Bayswater Road playing Blister In The Sun anymore. In fact, it’s pretty clean altogether.

The writing’s been on the wall for Kings Cross for quite some time, but yesterday’s shock announcement that Hugo’s Lounge was going into voluntary administration made it serious business. The damaging legacy of Barry O’Farrell’s knee-jerk reaction to alcohol-related violence has finally come full circle; his only solution to this problem seems to be an annihilation of the city’s nightlife.

Hugo’s owner Dave Evans isn’t impressed. “The real kick in the guts is that well-intentioned but ill-informed laws don’t appear to be solving the problem – they are simply moving it away, while the good, safe operators can’t sustain their business,” he says.

“I’m not even angry any more, I’m just sad that such horrible tragedy [the death of Daniel Christie following a king hit to the head in 2014] was followed by such ineptitude, and now, mass sackings in one of the places that set the benchmark on how to provide fun, safely.”

Despite a spotless violence record and zero strikes to its name, Hugo’s 680-person capacity venue, which includes its restaurant, club and bar, has one weekend left. The staff casualties sit at around 70. “Let’s not forget that this is on top of 100 jobs already lost in my venue over the past couple of years, and thousands more in adjoining venues,” says Evans.

Closing a bar like Hugo’s doesn’t just aim a kill shot at a once-famous area now on its knees. It also lowers the standard across the board for what we expect of our nightlife venues. In its 15 years, Hugo’s has been awarded both the best nightclub and bar in Australia. Sydney has literally pulled the rug from under an icon.

“If government were serious about the issue of alcohol-related crime, they should have made a state-wide policy rather than singling out Kings Cross and later, parts of the CBD and Oxford Street,” says Evans. “We really have loved Kings Cross. It's just a shame Barry O'Farrell didn't.”

So what are we losing?

Hugo’s was famous for a lot of things: its strict dress code, a perceived culture of elitism and the good times that went down on its upper balcony and in its gender-neutral toilets.

But it also raised the standard of quality, service and entertainment. Its kitchen won multiple gongs and at one point, it was crowned for the best pizza in Australia. You could eat this pizza on a goddamn dancefloor if you wanted. On a Sunday.

Sundays are what made Hugo’s. You can’t really eulogise the place without discussing Sneaky Sundays, arguably one of the cultural forces behind Sydney’s formative dance scene. Angus McDonald, Daimon Downey and a rotating crew of guests provided the best excuse to go back to work bleary-eyed in what was the country’s longest-running club residency.

But it also fostered a new generation of electronic talent, such as the Bang Gang DJs, Cut Copy, Ajax and Flight Facilities, which famously met one of its star vocalists, Jess Higgs, on the balcony.

Hugo Gruzman, one half of Flight Facilities, is incensed at the news that the bar is closing. “I thought we’d hit rock bottom, but we hadn’t,” he says. “Hugo’s was a safe place to listen to cool music. Everyone played there. The biggest DJs in the world, like Tiga, Erol Alkan and James Murphy. We were so lucky to have that.”

Gruzman, who got his start lugging backpacks full of vinyl to Hugo’s as a DJ, says the state government underestimates the cultural impact clubs have on the music community.

“You can’t be a DJ or have a future in electronic music without clubs. I made my career by going to dark rooms, listening to what was playing and studying what made a crowd move. You can’t get that from your bedroom. Clubs are the reason Jimmy [Lyell, also of Flight Facilities] and I met, the same with What So Not and Yolanda Be Cool. It’s ridiculous that this is happening.”

Young people who have grown up in a certain cultural movement like to throw the word “institution” around a lot. But let’s be clear; Soho, Trademark, the Backroom, they were ultimately just clubs. Nobody is happy that they’re gone, but Hugo’s was different. The place oozed cool, and elevated the area – and our city – in a way few other venues could. It didn’t matter if you were a cashier or a Kardashian, making it up the stairs into that bar could make anyone feel like a million bucks.

If one of the most well-known clubs (of old) in Australia can’t survive in Sydney, nothing can. Double Bay is not the answer. Neither is Newtown.