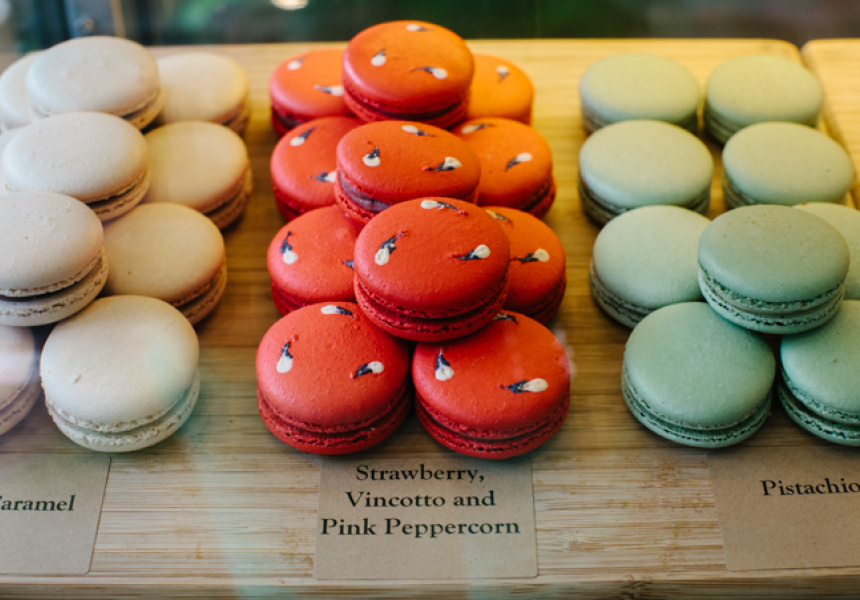 After the success of their Beach Christmas store over the silly season, the creative team at MakMak macarons has set up a permanent base in the same location in Newtown.

At the far end of King Street (almost at St Peters), the macaron master team, led by Carlos Heng and Daniel Pigott, are making a run for the title of Sydney's best macaron. They've been winning fans for a while purveying their delightful patisserie treats at The Grounds of Alexandria markets, Sweet Infinity in The Strand and Poolside Cafe at Andrew Boy Charlton Pool to name a few, but the permanent outlet gives fans a dedicated spot to check out all their latest macaron madness.

It's a tiny space sporting little but the simple glass case full of the latest flavours, fronting an open view to the macaron making space. Here you'll find a busy kitchen team mixing and baking fresh macarons daily with flavours inspired by the seasons and year's events; autumn saw apricot and elderflower, rhubarb and rose, peppermint and black tea, and strawberry vincotto and pink peppercorn.

Heng originally started MakMak from a residential kitchen back in 2010, so it's nice to see the team on show in the kitchen on King Street. Touted by fans as Sydney's best macarons, we suggest stopping by to taste for yourself.

But a word of warning, the blood orange G&T is filled with gin jelly that is a little on the temperamental side and should be refrigerated … or eaten immediately.