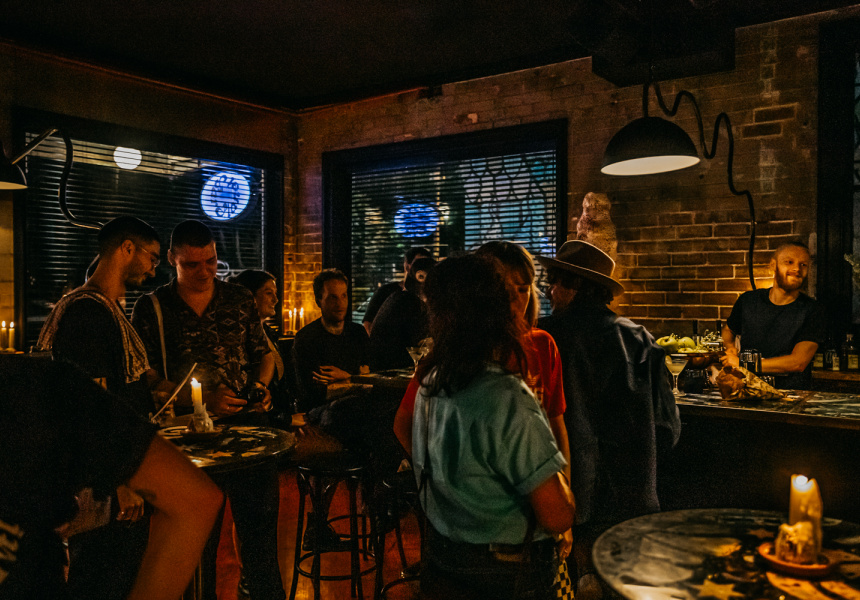 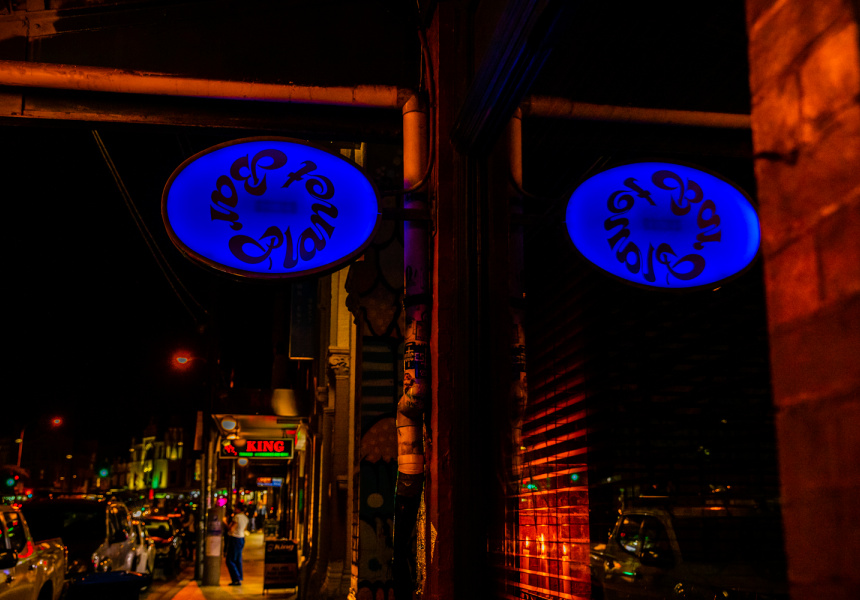 Entering Enmore Road’s newest drinking den, Bar Planet, is a transportive experience. Large black lamps with squiggly stems arch from the back wall of the bar and over the bartenders to hover above drinkers propped up at the counter. The sparkly intergalactic terrazzo bar top has been created by Australian artist David Humphries using surfboard resin, jade, marble and rare French glass, and is embedded with cut-outs of stars, galaxy-like spirals, and sprawling suns. Kooky geometric and spiky plants and flowers sprout across the room. It’s like stepping into an art nouveau-era bistro that’s been installed on the moon.

Bar Planet is the newest venue from the Mucho Aloha hospitality group, which is behind Cantina OK – currently number 23 on the World’s 50 Best Bars list – as well as beloved Margarita bar Tio’s, late-night tiki club Cliff Dive and OK Sparkling Margarita Seltzer. While the Margarita is the drawcard at Cantina OK, at Bar Planet the lynchpin of the menu is the Martini. Each visit begins with a bulging bag of spiced savoury popcorn plopped on the table in front of you.

A lot of work has gone into Bar Planet’s signature Martini. Co-owner and beverage director Jeremy Blackmore worked with Marrickville’s Poor Toms to create a base spirit for the cocktail – a gin made with seasonal, local produce that tells a story. The first batch has been made with heritage apples from Borry Gartrell, the fifth-generation Borrodell Estate winemaker and orchardist who passed in 2021. Once the first lot is almost done, Blackmore and general manager Harrison Kenney (who has moved across from Cantina OK after three years) will work on a second batch with another fruit – it’ll then be added to the existing gin, to create something like a Martini “mother stock” that’s constantly changing and evolving.

“The Martini is a quintessential part of cocktail culture,” co-owner Alex Dowd tells Broadsheet. “But it’s always been a bit exclusive; occasional but out of reach. Intimidating at worst. We really believe with a bit of organic, low-key cocktail theatre we could breathe a bit of life into the triangle glass and make that experience momentarily momentous. And, of course, who doesn’t like asking for a ‘filthy’ Martini?”

The house Martini is poured from large decanters, known as porrons – “a Spanish carafe for shared swilling,” says Dowd – which are chilled in a freezer, theatrically poured into a glass and garnished with an olive. Half-pour Martinis are also available, and you can get a smaller pour with soda for a lighter sip. If you are specific about your Martinis, there’s the option to choose your own adventure – select gin or vodka, and whether you like it wet, dry or dirty, and the bartenders will record your choices on the back of a coaster and create a drink to suit your whims.

Not a Martini fancier? That’s okay. Other cocktail options include an ultra-creamy take on the Bee Sting and the Scorpino – a spin on the Italian Sgroppino, here made with an ever-changing choice of wine (when Broadsheet visits it’s a muscat grape). A tight menu of beer and wine is also available, as are the team’s Margarita seltzers. All beers, wines and spirits are Australian and New Zealand-made.

As for that interstellar design, which incorporates bar, window, high-table and booth seating, co-owners Dowd and Daisy Tulley worked with art director Clayton Ciolac to a brief of “classic bistro crossed with psychedelics”. Tulley says the hope was to “flip reality” and give people a “once in a lifetime experience”.