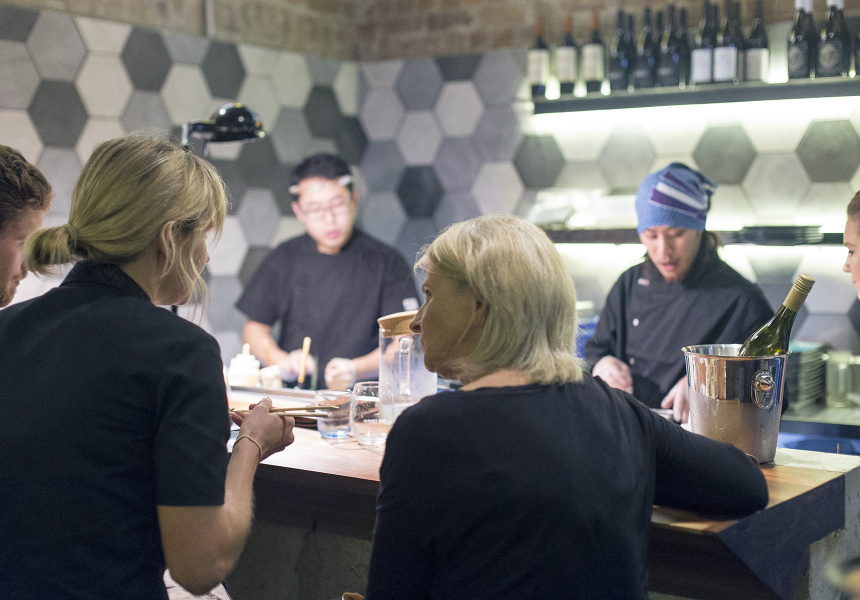 Sunset Sabi is a venue for anyone who wants to live like a Manlysider for a few hours, by the team behind Manly’s Chica Bonita. The venue serves share-style izakaya dining that isn’t beholden to traditional izakaya food. Instead, the menu is modern Japanese, with a focus on good produce and unexpected flavour combinations. It’s clean, fresh and tasty. Such as the fresh salmon sashimi on a slick of jalapeño cream with crisp white onion, tomato and baby shiso. And thin slices of seared tuna with garlic chips in a ponzu sauce.

Conventional Japanese dishes such as karaage are given a kick with a togarsahi, kombu and buttermilk marinade, fried until crunchy, seasoned with Szechuan spice and served with ponzu cream. Then there’s the caramel popcorn, covered in hard-set caramel, tossed through toasted buckwheat furikake and togarashi.

The fit-out plays up a juxtaposition of clean, cold and minimal textures against raw, organic timbers and soft blue furnishings. All the furniture is by local designer Exit Eighty Six, which also helped design the bar top, and an outdoor courtyard is in the works for summer.