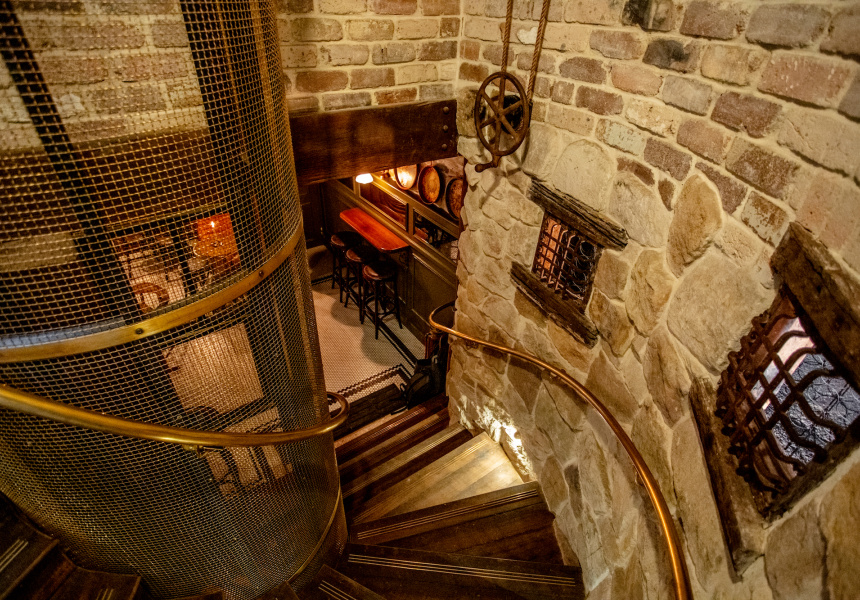 Sydney already has a bar behind a butcher’s shopfront, one that’s tucked at the back of a Redfern diner and several that require climbing multiple flights of stairs to reach. But this may just be Sydney’s best-hidden bar yet. Open the antique 1920s fridge at Cove Deli in Manly and you’ll find a spiral staircase that’ll take you to down to The Cumberland, the Northern Beaches’ very own speakeasy-inspired bar. Every detail has been considered, down to the aged brass and faux stains on the render.

The Cove Deli is a fully functioning establishment. By day it sells cheese and cured Spanish meats. At night it services the bar, transporting charcuterie and cheese boards downstairs via a custom-made dumbwaiter. A small kitchen in the bar pumps out tapas including “melty, stinky, bubbly hot raclette cheese”; Spanish meatballs; empanadas; and jacket potatoes.

Behind the bar there’s a whopping 250 whiskies, an impressive wine cellar (which you can see through peepholes in the stairway), and three distinct cocktail lists.

On the Foraged and Found menu, which is inspired by native ingredients found around Manly, find drops such as the Dandelion Espresso Martini, which uses both the flower and its root. The 19th Century County Tipples menu honours the exports the area was once known for: gold, hops, tea, wool, wood and dairy. There’s a cocktail relating to each, made with ingredients including sheep-whey vodka, corn-cereal milk and olive oil. The third list reflects the pre-temperance movement, with six classics that have been around for 150 years.