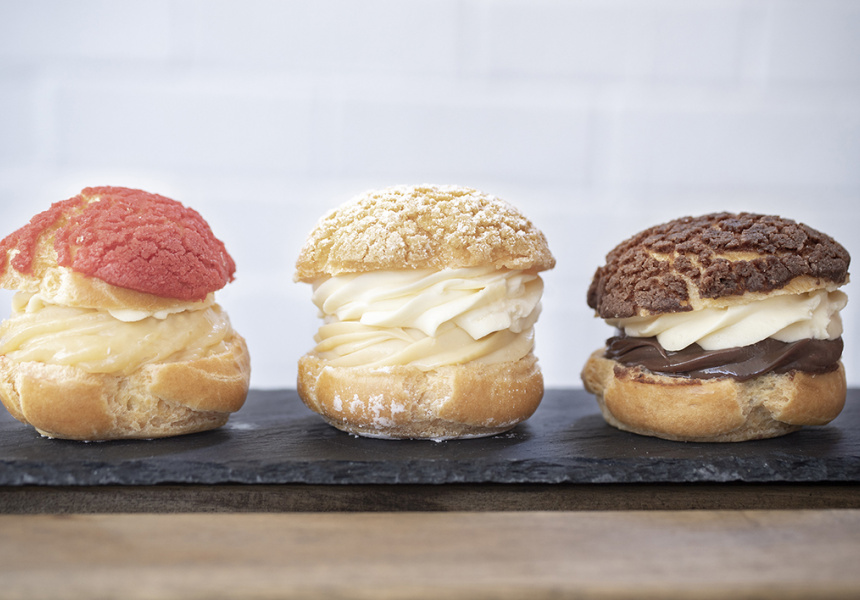 There’s no doubting Jian Yao’s pastry chops. The Continental Patisserie wholesaler has been in the game for almost 30 years, making cakes, tarts and pastries for everyone from David Jones and Starbucks to airlines and five-star hotels.

But for his first shop, he wanted to create a place where locals could drop in for a coffee and a pastry – or pick up a loaf of sourdough or a small cake to take home.

Lamin8 opened in Lane Cove in November 2020. The small corner patisserie – located at the rear of Lane Cove Arcade – has a bright, white interior, a small seated outdoor area, and a wide selection of viennoiserie, pastries and cakes. The croissants and brioche are butter-rich, flaky and delicious.

They’re the pastries Yao orders when he goes out for coffee – and what he was trained to make at Continental back in the ’90s, when he arrived in Australia from Shanghai. After starting as a kitchenhand, he took over the business in 2000.

The Lamin8 menu is a hit list of 20 pastries, including the kouign-amann (pronounced “queen ah-mahn”), a Breton pastry that gives the cronut a run for its money. Dense, buttery and topped with caramelised sugar, it lives up to its hype as “the fattiest pastry in all of Europe”.

The croissants are a firm favourite. They’re big in size and flakiness and come in a range of flavours, from classic butter to chocolate to almond, as well as less-traditional raspberry and poppyseed spin-offs. There are also hazelnut claws; raspberry and raisin twists; and pear squares with poached fruit on top.

But the palmiers – which also come in a range of flavours – have proven to be the big hit. Yao does these as take-home packs, in either single or assorted flavours.