No food has captured the imagination of Earth’s student population quite like ramen. Since the cheap, humble noodle soup made its way to Japan from China somewhere between the 17th and 20th century (it was called shina soba back then), it’s spread to pretty much every corner of the world.

In Sydney it started with Ryo’s Noodles. When Ryosuke Horii opened his restaurant in 2003, barely anyone outside of Sydney’s Japanese community knew what ramen was. Those who did had no idea where to get it.

Now anyone vaguely interested in food has a favourite bowl. Debates about who makes the best, thickest and cheapest bowls are almost unavoidable. But it’s not just thick, rich bowls anymore. The reign of vein-clogging, collagen packed, pork-bone tonkotsu has been usurped by a new era, favouring regional variety and lighter broths. From Canterbury to Crows Nest you can find broths made from charred miso, hemp and sunflower seeds, and more.

Truth is, there is no best. Whether you prefer a smashable Tokyo-style ramen or a spicy tantanmen, this guide will help you find your favourite. Owner Keita Abe might defer to tradition with regards to his yakitori, but creativity reigns supreme when it comes to ramen. His four signature bowls are standouts in a crowded scene: chilli-coriander, yuzu-scallop, fish salt and “fat soy”. The sequel to Chaco’s Darlinghurst ramen joint brings all the favourites to Bondi, including the chilli-coriander and yuzu-scallop ramens. There are also a few Bondi-only numbers, such as yakitori, prawn fried rice and pre-batched cocktails. The OG and current heavyweight champion of tonkotsu ramen in Sydney. If you’re a fan of gravy-thick, gut-busting pork soups that’ll transport you to Japan (Kyoto, specifically), seek out this buzzing counter inside the Eating World food court. Sydney's first ramen joint is still delivering the goods: bowls of curly noodles bathing in smashable broths, dressed with pork, bamboo shoots, boiled eggs, prawn mince balls or sesame seeds. Not necessarily all together. Watch for the queues – they start from the second Ryo’s opens and curl away down the block. 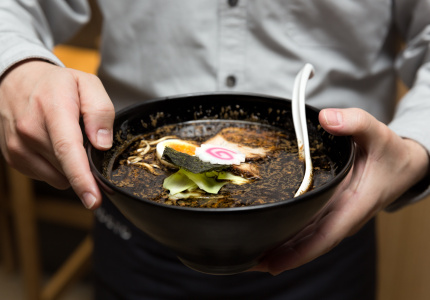 An upmarket cousin of Ippudo, famous for its kogashi-style ramen. Meaning “charred” in Japanese, the method involves overheating lard in a wok, then adding a special miso or soy base, followed by chicken broth. The results are intensely fragrant and umami-packed – but if you’re craving the classics, you can get them here, too. 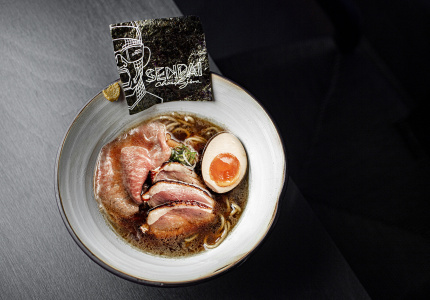 Chase Kojima's ramen restaurant serves the dish like never before as part of a lively, seven-course degustation. There's a killer snack game involved, too, served in a neon-lit space soundtracked by pumping tunes. 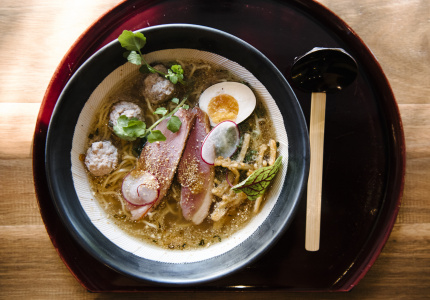 Only available at lunchtime, Gaku’s ramen comes from the mind of a former fine-dining chef. And it shows. The duck yuzu number – with duck consommé, duck meatballs and a citrusy yuzu kick – is the one people travel for. 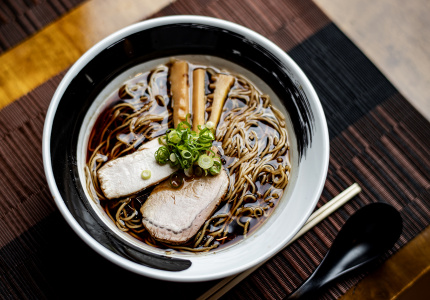 Run by a husband-and-wife duo on a leafy harbourside street, this cosy ramen shop does soups in a way Sydney has never seen before. Come for the show, plus handmade Wagyu gyoza and a drinks list that’ll transport you to Japan. Rara’s owners are the guardians of a top-secret ramen recipe passed down from two Japanese masters and consultants. And the thin, Hakata-style noodles deployed in each bowl are made in-house at the Redfern branch. One of the first places in Sydney to pair the unctuousness of ramen with the bright acidity of natural wine. 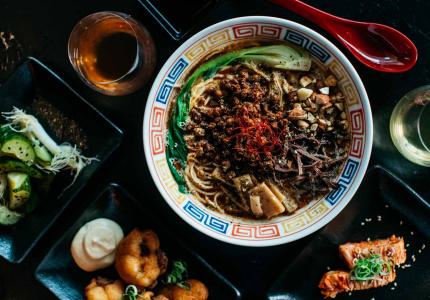 A tiny, plant-based spinoff from the Rara team, named for the Japanese word kuchisabishii, which roughly means the longing to put something in your mouth, even if you’re not hungry. The star of the show is a hemp seed-and-sunflower-based broth that mimics the creaminess and umami of a tonkotsu, served with Rara’s signature straight noodles. 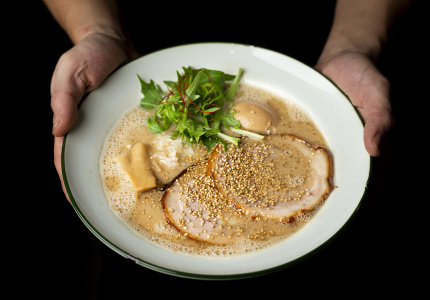 This sleek izakaya comes from the chef behind now-closed, Ichibandori, one of the city’s most innovative ramen joints. The menu here is just as thoughtful, and consists of elevated takes on a tonkotsu, plus a kombu-tomato number for vegetarians.

One of Tokyo’s most hottest restaurants is behind this luxe ramen joint devoted to Wagyu reared on a single farm in Japan. Try it in five signature dishes, including tsukemen (dipping noodles) with an umami-heavy beef broth. Plus, Wagyu gyoza and char siu bao. 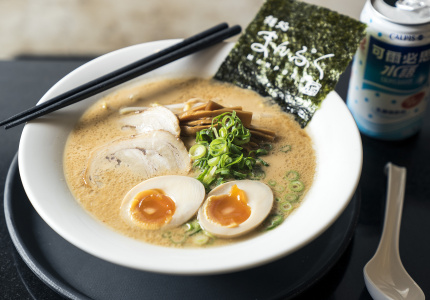 One of the earliest players in Sydney’s ramen scene, this buzzing spot is known for its signature “long name” ramen featuring a complex chicken-and-pork shoyu broth. Be warned – you may have to queue for it. But the wait time is worth the reward. A close rival to Gumshara for the title of heaviest tonkotsu in town. And though it’s by a Gumshara alumnus, there are distinctions to be made: noodles made in-house, and staff (plus many customers) who wear shirts printed with Yasaka’s credo: "No Ramen, No Life." If you never had a chance to try the wares at Ramen Osan in Haymarket before it closed, you can here. One of the standouts is the gyokai tonkotsu, a powerful, fish-flavoured ramen made with snapper head, bonito and pork bones. A small, rustic space focusing on just four types of ramen and a tight list of snacks. Go for the classic Tokyo-style shoyu ramen, made with 18-hour broth and topped with a gooey soy egg. 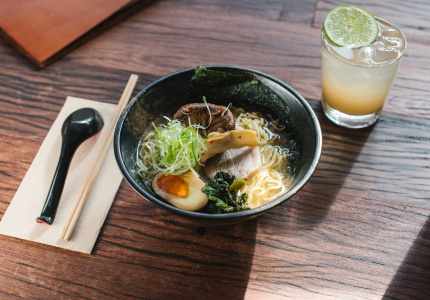 An unlikely pairing of ramen and motorbike repairs. The lunchtime ramens here tread familiar territory, but the breakfast ramen may be the one to rule them all: bacon, an egg, umami-packed roast tomato and noodles bathing in buttered toast bone broth. Genius. 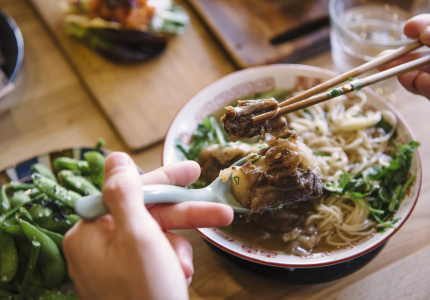 Like nowhere else in Sydney, this spot blends sakaba-style dining (a more family-orientated version of izakaya) and Spanish tapas. The signature oxtail ramen is the one to order, served straight up or in a spicy miso variation. 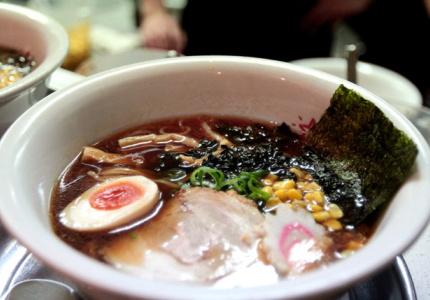 Cheap, cheerful and popular as ever, this bustling joint next to Kinokuniya serves every kind of ramen under the sun. The Tokyo-style bowl sits high on the list for a reason – it’s super light, which means room for an extra beer and a side of gyoza afterward. 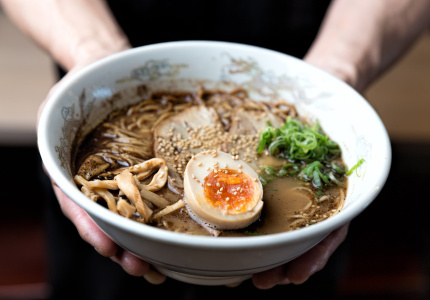 The little sister of Menya Noodle Bar, a fast-casual Japanese noodle and don joint on Market Street. It serves the same lighter-style tonkotsu broths and rich chicken soups, except the pace is much slower. It’s a little cooler, too.

The best meat, three vege and yorkies in town.

Sweet or savoury? Standard or experimental? We can help you decide. 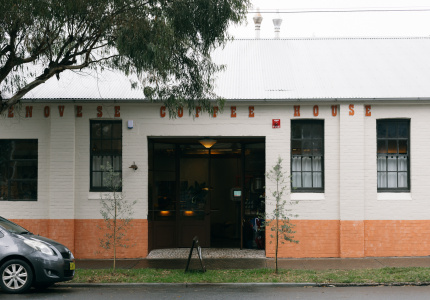 Italian Influences Are Laced Throughout Genovese Coffee House, a New Cafe in a Converted Alexandria Warehouse How I Got Here: Jenn Black, General Manager of Quarterdeck, The Whale, The Inlet, Lynch's Hotel and Queen Chow