Bagels have a murky history. Although they’re believed to be related to the kaak, a ring-shaped Arabic biscuit, most agree that bagels as we know them originated in Poland in the 16th century – a byproduct of the prominent Jewish population there.

A couple of hundred years later, they headed westward – first to the beigel shops of London, then onwards to the bakeries and delis of New York City. And that’s where these boiled, baked beauties really took off. But it took a little while for the NYC-style bagel (and its smaller and sweeter cousin, the Montreal-style bagel) to reach our shores in large quantities.

But thanks to the persistence of bagel aficionados such as Michael Shafran in Marrickville, who’s been running Brooklyn Boy Bagels since 2013, and the hard work of bakers in the eastern suburbs (which is still the heartland of Sydney’s Jewish diaspora), we’ve seen an explosion of excellent bagel-based businesses in recent years. And they’re selling every style and topping imaginable. 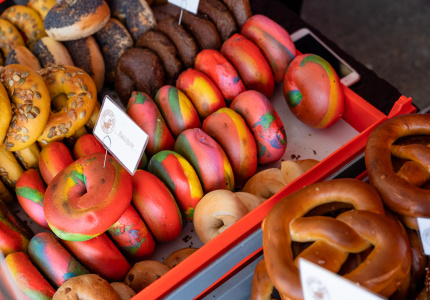 Bagel maestro Michael Shafran has been serving Sydneysiders with hearty New York-style bagels since 2013. His wares are carefully made over two days in his neon-lit industrial bakery, with options ranging from an eye-popping rainbow-dyed to the fan favourite “everything” (topped with poppy, sesame and caraway seeds, plus garlic and onion). Four varieties of chewy, pleasantly dense bagels are boiled onsite here every day. They’re not too sweet – and if it’s a truly Jewish-style meal you’re hankering for, try the cafe’s chopped liver, egg and onion on a sweet onion bagel with a side of pickles. 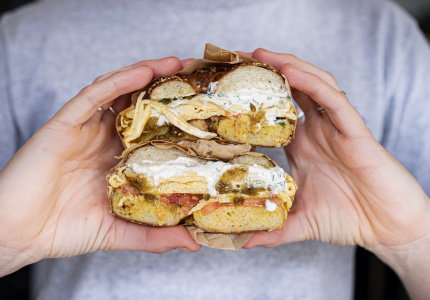 This laid-back neighbourhood cafe is an island of great coffee on an otherwise barren stretch – but it's the fantastic baked goods that keep us coming back. There's a different type of pastry and focaccia to enjoy every day, plus some of the best bagels in town. 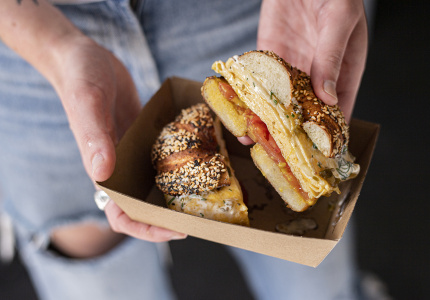 The second outpost for the Dulwich Hill favourite. This light-filled, dough-smelling space is great for everything bagels, spicy tomato focaccia and cinnamon doughnuts. Plus suburb-specific sandwich specials, and ferments and pickles to take home. 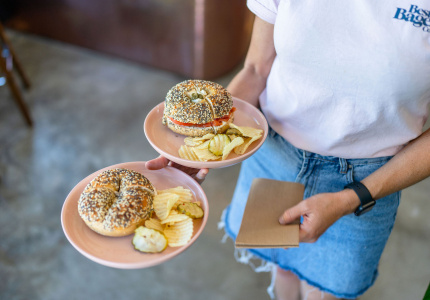 A sunny corner shop filling bagels with fresh, sustainably sourced ingredients. While the smoked salmon and dill with cream cheese is a daily go-to, the shop mixes it up with monthly bagel takeovers from hospitality gurus. 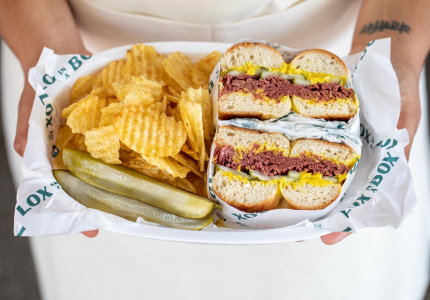 A hole-in-the-wall spot where you can grab chewy bagels stuffed with cured salmon or salted beef, with a side of crisps and pickles. Or grab house-made egg dip and schmears to take home. Batch brew topped with whipped cream is about as fancy as it gets at this airy, unpretentious cafe. The star of the menu could well be the black-sausage sanga – but the simple and satisfying bagels here shouldn't be overlooked. Members of the Soulmate crew are also involved in this sleek, specialty coffee joint. You’ll find the same laid-back energy, but a much bigger focus on bagels – try the smashed avo with togarashi, coriander and lime; or the Sweet Boy with ricotta, banana, toasted almonds and honey. Instead of swearing by secret recipes, baker Igor Ivanovic believes it’s the love and energy he puts in that creates the real difference in his products. His bread is arguably Sydney’s best, and you can bet his bagels are right up there, too. Hungarian treats have been front and centre at this bagelry and pretzel-maker ever since it opened in 1979. Here you'll find exquisitely layered chocolate cakes and strudels, plus bagels good enough to stand up to any of Sydney’s flashy new-school bagelries. The best meat, three vege and yorkies in town.

Sweet or savoury? Standard or experimental? We can help you decide.