What is Umami, Really?

People who think they know will say it’s the fifth taste. But is that it? 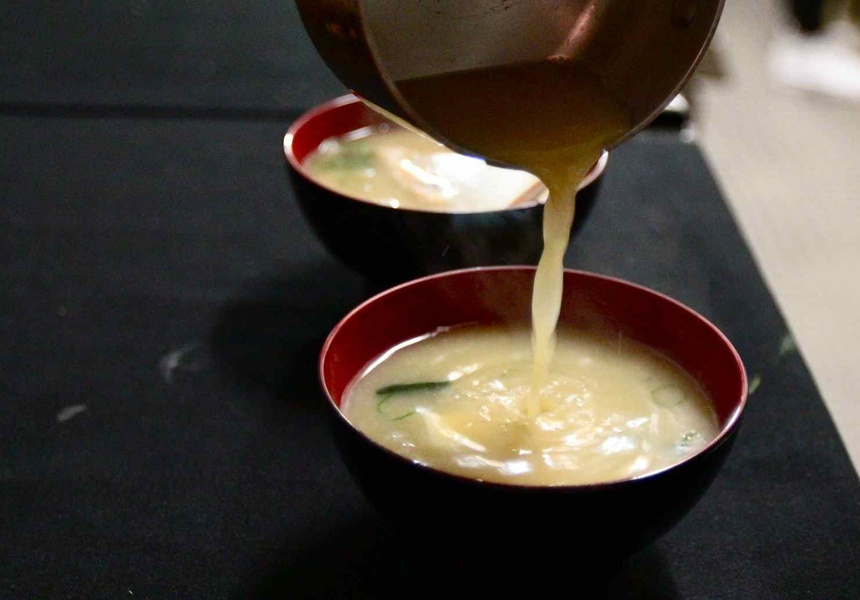 There’s a sign outside a cafe in the city, which says “great umami coffee”. Scientifically, the sign makes no sense. Umami is a taste that comes from glutamate, an amino acid absent in coffee. Umami is one of the five basic tastes that make up the human palate, the others being sweet, salty, bitter and sour. It’s abundant in preserved food, Parmesan cheese, tomatoes, soy sauce and fish – all things we’d loosely describe as savoury. So why didn’t the sign say “great savoury coffee”?

Some of the confusion may come from the Japanese origins of the word. Harumi Minagawa, senior lecturer in Japanese at the University of Auckland, says the word has multiple meanings. Umami can be used to describe the fifth taste, as well as a more general idea of deliciousness. However, it’s most common use is much more specific. “Every Japanese person should know the word. It’s generally not used to mean the fifth taste sense, though. It's often used to describe an essence of taste of ‘certain’ food, when umami is extracted or revealed in the process of making soup and stock.” The best example of this is dashi, the Japanese soup which first inspired the identification of umami as the fifth taste.

Can you “feel” umami?

Umami is enigmatic, alluding to something beyond taste. Kerby Craig and Ryoji Ohgushi, chef and sommelier at Ume, explain it as a feeling of contentedness and fullness. “You know you finish work, you’ve had a long week and you sip a beer ... Aaaahhhh,” Kerby says. Ryoji agrees, it’s difficult to explain. He says, although satisfaction is one of the aspects of umami, like most Japanese words, there are many meanings.

The chemist who first proposed the idea of umami, Kikunae Ikeda, was certain dashi had a taste undefinable under the existing categories of sweet, bitter, sour and salty. Ikeda tediously isolated and identified the essence of that flavour, making a breakthrough in 1908. It took almost a century, but now umami is internationally recognised as the fifth taste.

Studies over the past 15 years have revealed a nerve in the stomach as well as the tongue that senses the presence of glutamate. Umami-rich foods – such as soup stock and preserves – require little to no digesting. Once they arrive in the stomach, their nutrients can be distributed much faster than other foods. The nerve senses the presence of the glutamate and sends this information to the brain. The consequences of this discovery are yet to confirmed but recent research suggests umami-rich food may make you feel more full, or satisfied, than other foods with equivalent calories. So, there may be some grounding to Kerby and Ryoji’s interpretation of that “aahhh feeling” in science.

Does umami exist only in Asian food?

Many people still consider umami to be a flavour unique to Japanese or Asian cuisine. Haru Inukai of Ramen Ikkyu, says the idea of umami is exclusively tied to Japanese stocks. “Umami is only from clams, konbu (kelp) and katsuobushi (dried, smoked tuna). I have never had umami from European food.” Scientifically speaking, Haru is wrong but his understanding shows how puzzling the idea of umami is. The Guardian has even described things such as Marmite and the ketchup-cheese combination on cheeseburgers as equivalent taste.

We asked Yasushi Hirai, Japanese lecturer at University of Technology Sydney, why the meaning of umami is so varied. “It’s a very subtle thing. It’s not a very distinctive flavour. So the interpretation is very broad,” he says. Hirai says he occasionally translates sake descriptions from Japanese to English for his nephew in Japan. One of the descriptions claimed the sake had umami flavour from the speciality rice used to make it. Although Hirai understands that rice doesn’t contain glutamate, he agreed with his nephew – rice does have umami. “It’s in the smell, just like freshly baked bread – if it’s two or three days old, you don’t get it.”