When was the last time you ate a parmigiana in a nice restaurant? Beccafico does modern Italian food; traditional dishes that are lighter and prettier. Among them is an eggplant parmigiana. Usually relegated to pub meals, this rich eggplant dish will change some minds.

Head chef Diego Arata comes from Brindisi, a town in Italy’s boot where parmigiana is as popular and common as smashed avo on toast is here. In the south of Italy it often comes messy and heaped with a rich, hard cheese. But Arata serves his like an intricately layered cake with only a sprinkle of cheese on top and a small portion of Australian buffalo ricotta at its side.

“It’s a different approach to food. Traditional food has beautiful roots and beautiful ingredients, but the technique is not always the best because over 80 years things change.” Arata says many traditional Italian dishes have unnecessary amounts of oil or butter, “So we're trying to make it a bit lighter, to make it more digestible.”

The new Danks Street restaurant, the latest in a recent flurry of openings in Waterloo, serves dinner and an Aus-Italian brunch. There’s avocado on toast, but this one is served with Beccafico’s smoked ricotta and gremolata on house-baked sourdough. Considering the abundance of Italian restaurants and businesses in Sydney, it’s a surprise we don’t see more innovative Italian-inspired cafe fare, such as the almond-milk white polenta and vanilla porridge with poached fruit, or panettone pudding with amaretto chunks, mascarpone and wine-poached pears.

Arata, who was last at Canberra’s acclaimed Mezza Lira, has been given full control over the kitchen, menu and the restaurant’s suppliers. “I like to use Australian produce. I think it's really important.” The menu will change in harmony with the availability and quality of the produce. Some dishes, such as the rich pappardelle with mixed mushrooms, and the tangy, textural octopus salad with lemon, cannelloni beans and cherry tomatoes, will thankfully be permanent.

The only thing the affable chef wasn’t directly involved in was the fit-out, which comes from a collaboration between one of Beccafico’s partner’s, Les Huynh, and Matt Wood Design, which worked on neighbouring Devon on Danks. Half the floor is white, green and timber while the other is dominated by black, metal and an open cellar. Together it gives the feeling of being in an opulent boat hull with windows letting the sun pour in. 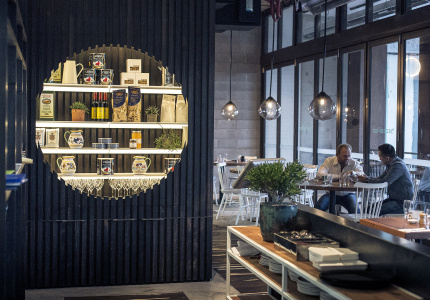