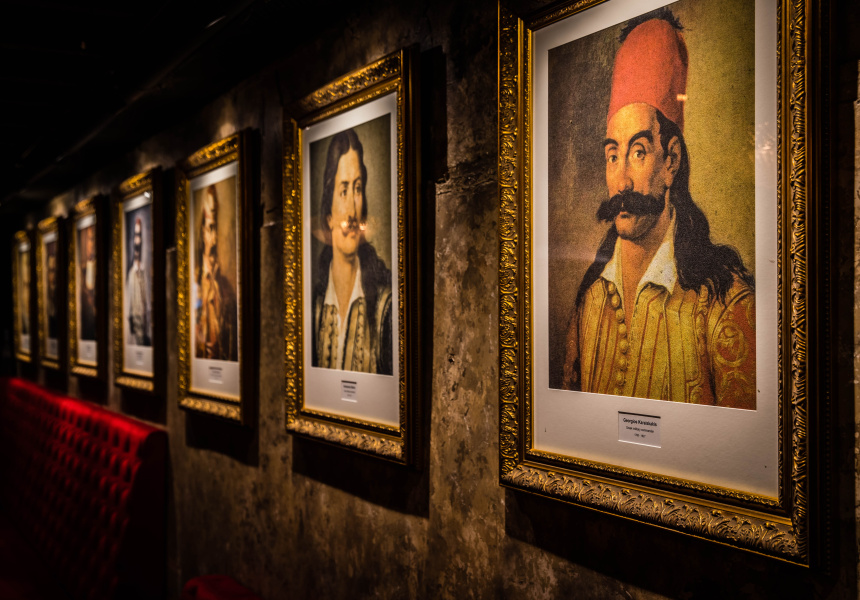 The new bar was inspired by the history of the Greek Revolution, says the head chef Tsirekas. “Odessa was a Greek settlement before it was occupied by the Ottoman Empire,” he says. “When the city was liberated by Russia’s Catherine the Great, half of Odessa was handed to the Jews fleeing persecution and the other half was handed to the Greeks. It was in Odessa that some Greeks plotted their own [revolution].

Guests enter the venue through a nondescript black door from an alley behind the venue. The bar is at the bottom of a narrow, dimly lit staircase. Once inside, Bar Odessa promises luxury fit for a tsar with an extravagant suite of caviar alongside other Black Sea indulgences: pates, oysters and smoked fish.

Bar Odessa’s 80-person lounge area has been fitted out by Athens-based designer Dimitris Economou (the same designer who furnished upstairs). The theme is described by Tsirekas as “Catherine the Great (Fabergé egg indulgence) meets stark, Stalinist bunker.” Lounge on red velour couches and sip from heavy glassware while surrounded by paintings of Greek political heroes in gilt frames.

The room revolves around three lavish, high-backed booths. Each banquette comes with its own name and accompanying portrait paying tribute to a historical period. Guests can reserve “Ivan the Terrible”, “Catherine the Great” and “Bouboulina,” (named for Laskarina Bouboulina, the heroine of Greek Independence) for a minimum spend of $1000.

The cocktail menu’s Hellenic offerings include the Greek Spritz with Metaxa, Plymouth sloe gin, Luxardo maraschino liqueur, fig jam and champagne; and the Ouzotini, which mixes ouzo with mint-infused vodka, peach schnapps and lime. Beluga vodka stars in many of the other cocktails, including the Beluga Mule (Beluga vodka, ginger beer, lime, mint) and the Beluga Berry Nice (Beluga vodka, citrus-infused vodka, crème de cassis and mixed berries). Shelves behind the bar hold an extensive range of vodkas, ouzos and rakis. 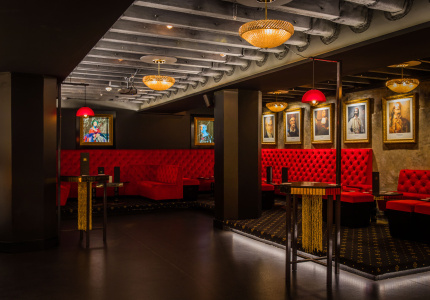