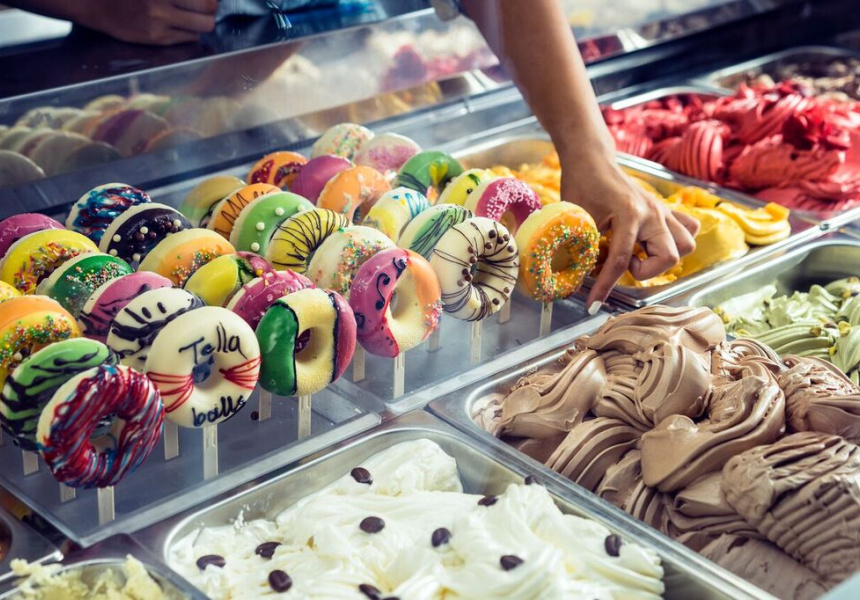 Remember those milkshakes topped with Nutella-filled doughnuts that spread across the Internet like a glitter bomb? The guys who set off that bomb are doing it again with the Tella Balls Dessert Bar.

The duo, Simon Kappatos and Aki Daikos, have sold Foodcraft Espresso and are creating a string of dessert bars, starting in Dulwich Hill. “The Tella Balls Dessert Bar is our future,” says Kappatos. It’s like a dessert zoo; every standard cake and dessert is there, alongside a range of exotic and sometimes wild ones.

As well as the signature Tella Ball-topped milkshakes, you can gorge on lasagne with layers of Nutella, chocolate biscuit and soft chocolate cream. Soft serve is showered in Malteasers or Kit Kat crumbs. There is also Tella Ball geladough, which is doughnut-flavoured, doughy gelato served doughnut-shaped on a stick.

“Everything is made in-house,” Kappatos says. The only thing that isn’t is the Tella Balls themselves, which, due to demand, are made on a bigger scale off-site. “We don't compromise on quality. We don't take any shortcuts. In the sorbets we use real fruit. There's no processed stuff or artificial powders,” says Daikos.

The team doesn’t compromise on theatre, either. All the crepes, waffles and pancakes are made in front of you by the pair’s dexterous Italian dessertsmiths. There’s a gelato lab with live gelato production right behind the counter. The entire fit-out is full of cake displays and Nutella iconography. The walls are adorned with Nutella jars and accompanying quotes.

The pair says this store is the experimental origins and crown jewel of what it hopes will be an empire of future Tella Ball bars. “This is our first, flagship store. We've had a lot of interest in Miami, New York, the UAE, Iran and Malaysia. That's where we're heading,” Daikos says.