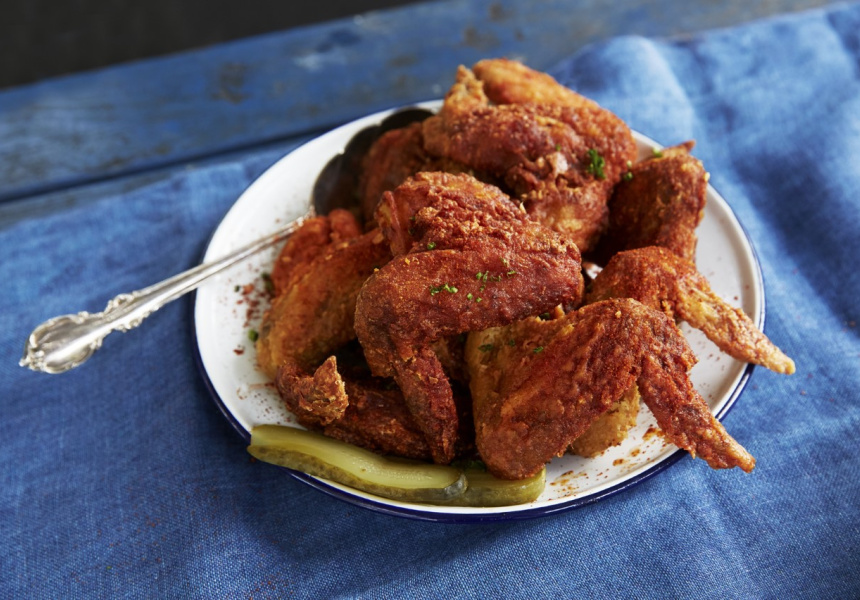 When Dennis Chan visited Prince’s Hot Chicken Shack in Nashville, he heard his calling. “I was blown away by the product,” he says. “I couldn’t work out how chicken could taste so good. ” When he came back to Sydney, he set about figuring it out. Chan spent a year experimenting with fried chicken recipes until he settled on a cooking style that’s uniquely Asian-American for his food truck, Dirty Bird.

“We did a test run in Cabramatta in December, and people said it was the best fried chicken in the west,” he says. “There was no turning back.”

Chan says the secret to the perfect fried chicken is brining the meat before cooking. “Brining for 12 hours introduces a lot of moisture into the chicken,” he says. Chan’s brine is more than just salt water, but he won’t reveal his secrets. Dirty Bird’s Crack Burger is one of the most popular items. Chicken breast is battered and rolled in rice bubbles which make the coating crispy and impervious to sogginess.

“The fried chicken is a different ball game from the burger,” says Chan. “I’m going for a classic, wafer-thin crust that snaps when you bite into it.” It’s the antithesis to a heavy, KFC-style floury batter.

Occasionally, the Asian influence is in the chicken itself – Dirty Bird uses ginger and garlic in its marinades – and sometimes it’s in the sides. Umami fries are sprinkled with nori (seaweed) flakes, and dressings have coriander and soy.

When designing the food truck, Chan thought about visibility at night. The truck is colourful with a neon version of the origami-style chicken logo, and the menu is lit up with LEDs.

Dirty Bird starts flipping from 5pm–9pm on Fridays at Macarthur Street Markets and on Saturdays at Paddy's Night Markets, Flemington from 6.30pm–10pm.