The Bulletin Place crew has opened a neighbourhood bar serving Gelato Messina dessert cocktails, a grown-up take on a Breezer, and bar food by a fine-dining chef. 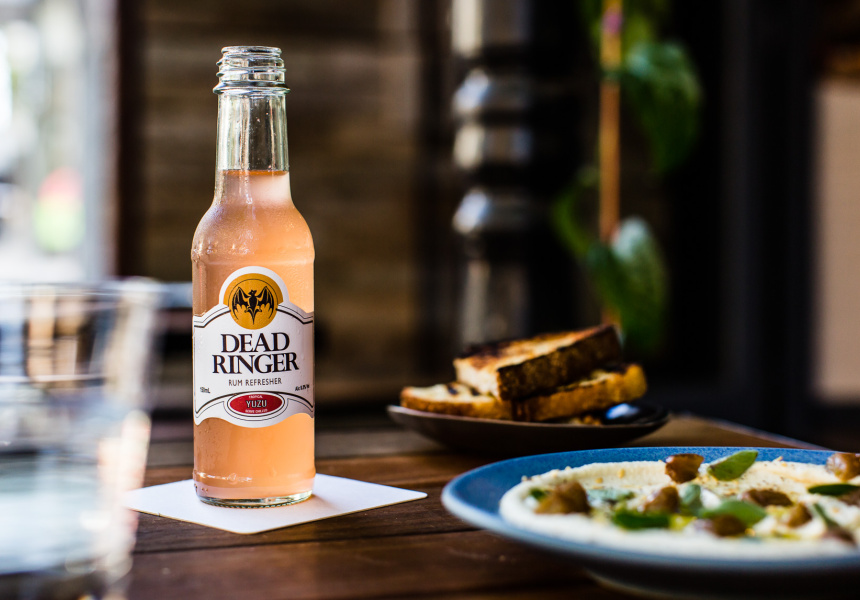 A dead ringer for Bulletin Place it isn't. Instead, Rob Sloan and Tim Philips have changed things up for their second venue. So while Dead Ringer does have delightfully imaginative cocktails, it also has a seasonal food menu, an interesting and ever-changing wine list, plus an all-Australian selection of beer and cider. And all this in an elegant, neighbourhood-bar setting with a beautiful terrace out front for warmer evenings.

“We feel like we've got more strings to our bow than just doing cocktails and we thought, why don't we combine our love of doing food into something that's still very much a bar in its DNA, but blurs the line between bar and restaurant?” says Sloan. While the front of the bar is very much a drinking and snacking area, toward the back is a room with dedicated dinner booths, perfect for settling in for a plate of roast chicken with cavalo nero and a bottle of red.

Philips and Sloan (the duo are joined at Dead Ringer by David Hobbs, ex-Milk & Honey, London) say they wanted the cocktails to be different from those on offer at their first bar. “Whereas Bulletin Place is known for using seasonal Australian produce, we only wanted cocktails here that work well with food. Cocktails that are very fresh and light and aromatic,” says Philips.

The Yuzu Breezer is a cheeky take on the alcopop you may remember from your youth (which was discontinued by Bacardi last year). Dead Ringer's Breezer is a cheerful mixture of yuzu liqueur, grapefruit, rum and soda. The drink is pre-batched in bottles complete with Bacardi-reminiscent labels (Philips even got Bacardi's approval for the idea).

In the kitchen, former Est and Farmhouse Kings Cross chef Tristan Rosier has been told to do whatever he likes. “We really love his food. He's got that touch of fine dining and he's got his eyes on the market,” says Sloan. Rosier has created a seasonal menu of eight smaller dishes and eight large plates. At the moment, the menu includes starters such as pork jowl terrine with rye crumb and mustard seed, and larger dishes such as lamb rump with black garlic mustard.

Then there's the Gelato Messina collaboration. “A lot of times I'd be at a restaurant and it would be time for dessert, and I'd say, 'Stuff it, I'm just going to Messina',” says Philips. “So I got in contact with them with the idea of doing a cocktail matched with one of their flavours.” The result is a dessert cocktail of burnt-butter-and-sage gelato accompanied by a salted whisky toddy. The drink is poured over the ice cream to become a warm, boozy thickshake. The plan is for two more collaborations with Messina over the coming months, each running for six weeks at a time.

“My only goal with bartending is to serve nice drinks to nice people. If I can do that, I'm happy,” says Philips.