The Sydney Dishes You Should Know About: Omu’s Omurice

Sliced straight down the centre, the omelette’s edges fold out to reveal mountains of soft curds that cascade down the sides. Order it with the tomato sauce, and just for a moment, glimpse perfection. 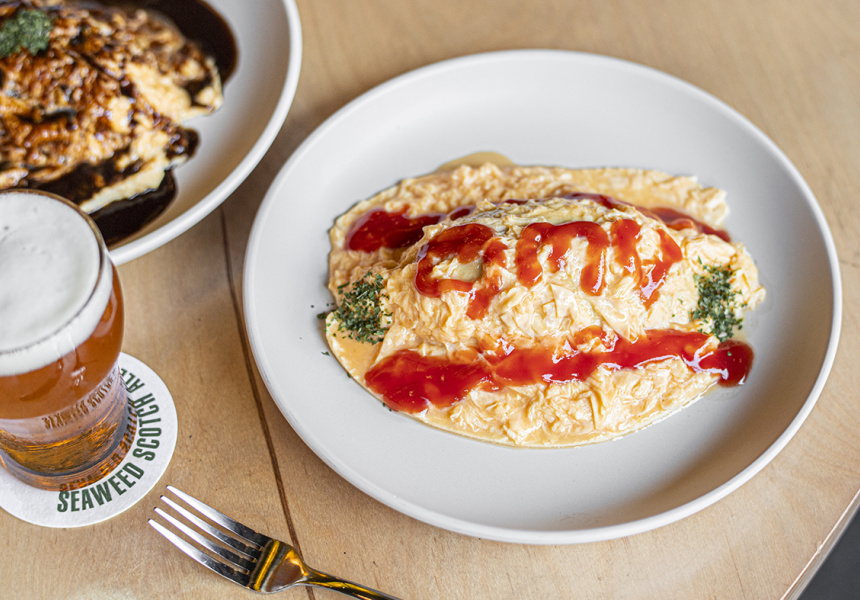 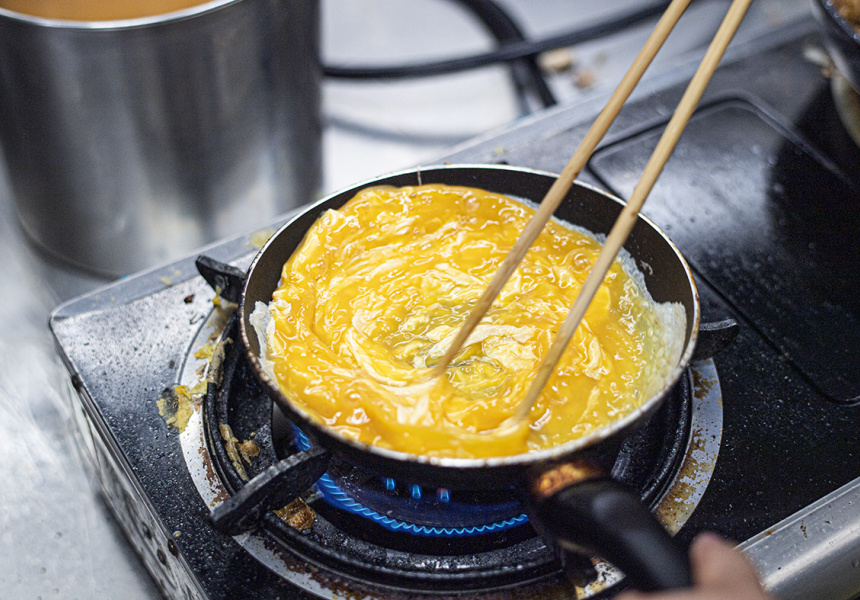 Some of us used the first lockdown to bake bread, to read more, to snack aggressively, to hustle, or in some cases, do not very much at all. Mikiko Terasaki? She was making omelettes.

“The perfect omelette must have a thin, lightly cooked layer on the outside and a soft and runny egg mixture on the inside,” she tells Broadsheet. “Creating the perfect omelette is no easy feat.” Eat at Omu, the roaming market stall Terasaki set up in December 2020, and you’ll start to see why.

Working over a gas burner, Terasaki ladles strained beaten egg into a greased non-stick pan, agitates it furiously with a pair of wooden chopsticks to form curds and set the base, then gently folds it up. With a flick of the wrist and a tap or three on the handle, the omelette rolls over, sealing itself. She’ll roll it once or twice more, letting the outside firm up, then ever-so delicately turn it out onto a mound of rice.

And here’s the money shot: Terasaki grabs a knife, and slits straight down the centre. The edges fold out to reveal mountains of soft curds that cascade down the sides, before Terasaki spoons demi-glace – that thick, rich beef-stock reduction – or squirts tomato sauce over the top. One glorious result, all in less than a minute.

For fans of omurice, the wonders of this dish are no surprise. But for the uninitiated, you should know it’s a meal that holds a special place in so many hearts. Like curry rice or Napolitan (ketchup spaghetti), omurice is one of the more ubiquitous yoshoku – or Western-influenced – dishes in Japan, with appeal built on its accessibility and the fact it can be tossed together with just a few pantry staples.

Terasaki’s version is about as refined as it gets, but she says it sticks in her memory as something her mother, who teaches cooking, made for her as a kid growing up in Fukuoka. “To me, it has a nostalgic taste and reminds me of the good old days of my childhood,” she says.

It might be a taste of home for Terasaki, but in the world of high-end cookery, omelettes are spoken about in hushed tones. Anthony Bourdain famously said that the way you make an omelette reveals your character. Jacques Pépin, the guy who literally wrote the book on technique, opened MAD 5 by cracking and flipping eggs live on stage. There was even a rumour going around that the password for The World’s 50 Best login was the word “baveuse”, a French term for that dog-slobbery quality the inside of a perfect omelette should aspire to.

But if the French invented it, it’s surely Japan that mastered it and then made it their own, from the home-style example seen in the cult classic film Tampopo, to the upper reaches of Motokichi Yukimura’s version at Kyoto’s Kichi Kichi, where so many omurice fans make pilgrimage. And while Devon in North Sydney and Redfern’s Cafe Oratnek make their own versions, with Omu, the city has its truest example – the egg softer, the garnish sparer, the technique honed over hours of practice and so many Youtube tutorials.

Terasaki, whose stall moves between spots in Bondi Junction, The Rocks and Chinatown, serves a couple of other dishes, but it’s the omurice that draws the queues. And sure, the rice – tossed with chicken, vegetables and a dash of demi-glace – is more good than great, and the demi-glace thicker than it could be, but order it with the tomato sauce, unceremoniously squeezed out to spell “Omu”, and just for a moment, glimpse perfection.

Omu frequents markets in Bondi Junction, The Rocks and Chinatown. It’s currently popping up at Darling Harbour’s Harajuku Gyoza, from Tuesday to Sunday, until November 28. Check out the schedule here.

This is the first instalment of “You Should Know About This Dish”, a regular Broadsheet column where we eat and discuss the important, tasty and interesting dishes that make Sydney such a fascinating and nuanced eating city – and a world-class dining destination. 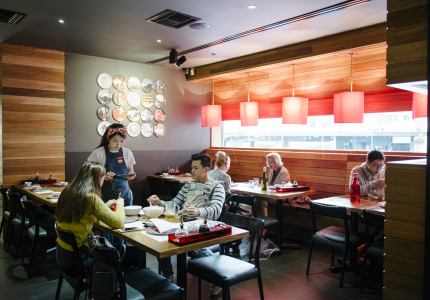