Get the same meat used by Sydney’s premium Japanese restaurants from a dingy car park open just a couple of hours a week. 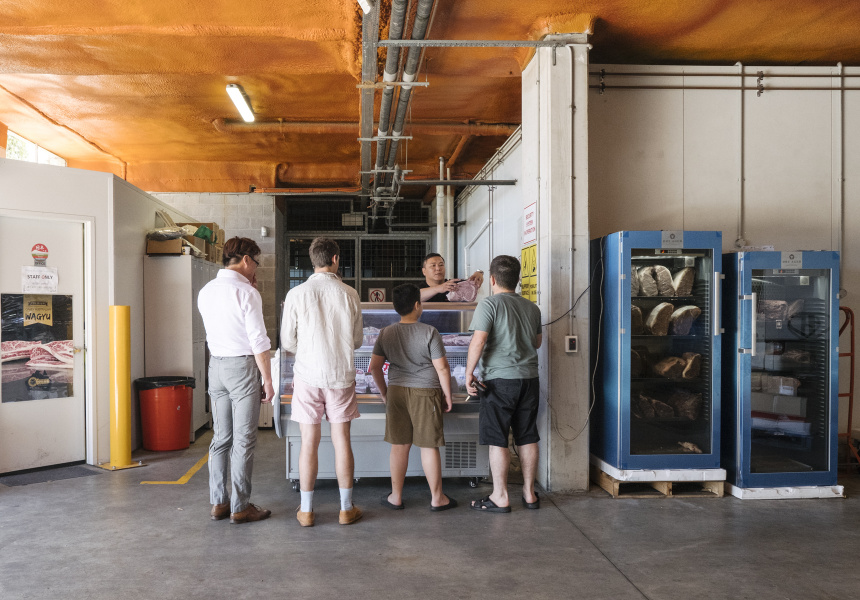 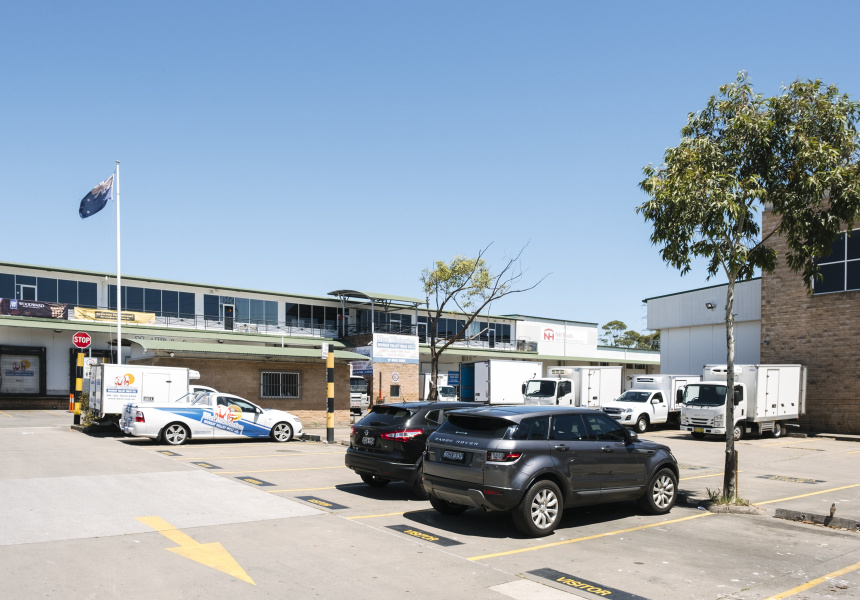 We double-check the address because where we are doesn’t look the way we expect it to. There are shipping containers, pallet stacks, vehicles, and no one else around besides dudes scurrying around in high-vis vests. We walk around aimlessly, spotting logos for various industrial meat factories before we see what we’re looking for: a big white sign with “Osawa Enterprises, Ultimate Fullblood Wagyu” scrawled in capitals across it. It points to an austere basement, that just a minute ago we thought was a dingy car park.

It’s dark, sparsely populated by boxes and more people in fluoro vests, and it smells like fridge. But in the corner there’s a treasure-chest-sized display cabinet, and next to it a confidently dressed man by the name of Kimio Osawa.

That display cabinet might not look fancy, but it’s housing some impressively luxe produce, some of the most expensive in Sydney. We’re talking prime Wagyu beef, the richest cuts of beef available. Inside are meats – crimson-maroon, speckled with fat, and selectively bred over many generations and with prices to match. Some are so marbled (the meat-to-fat ratio) you can eat them without chewing. But hardly anyone knows about this place.

Osawa’s business isn’t in retail; he sells this stuff to premium Japanese restaurants around Australia, including Sydney’s Rengaya and Raita Noda, which have been using his beef for 18 years. But on Saturday mornings for three and a half hours, Wagyu enthusiasts visit for the A+ goods in his display cabinet.

“We only have 20 or 30 people coming in each Saturday; all Japanese and Chinese, never any Western customers,” Osawa says, seemingly bemused. “The people are coming [to this area] just to buy cheap pork, but I'm selling really expensive meat. They don’t know what this is. They come in and see the prices and walk out.”

The original plan for Osawa – who also runs the excellently named Facebook group Australian and Japanese Wagyu Raving Fans – was to raise the beef himself. He knew a doctor that was importing Wagyu embryos from Japan (the first to do so), and had a rough idea to raise a herd on a plot of land near Canberra with his brother-in-law, a beef farmer.

That was 20 years ago when Wagyu beef hadn’t penetrated the Australian consciousness yet. No one wanted to take the punt on Osawa and his idea. “We could find land but the issue was finance. We asked so many people, looking for investors. Back then there was no crowdfunding,” he says.

So he dropped the plan and changed tack. He knew there was a rising demand for high quality beef, particularly in Sydney’s Japanese restaurant scene, and there were some good local farmers; Osawa just needed to get their beef into restaurants. The problem was restaurants weren’t in the position to butcher animals, and Osawa had no idea how to cut meat, so he went back to Japan. “I knew someone who could educate me at a supermarket. I had a job cutting meat for six months just to practise. I didn't get paid for six months.”

When he returned, around 2000, he started Osawa Enterprises. It was quickly profitable but he couldn’t keep up with demand because there wasn’t enough good meat to source. “I was buying the whole bodies but the quality wasn’t great. I couldn’t fake it. Sometimes it was good but sometimes it was shit.”

He persevered and now he’s one of the biggest suppliers of wholesale Wagyu in Australia, selling both Australian Wagyu and, as of June 2018, importing Japanese Wagyu beef into Australia. Last year the government lifted the ban on foreign beef imports because the threat of mad cow disease had dissipated.

If you pay Osawa Enterprises a visit on Saturday, you’ll likely see Osawa there, probably sporting a shirt buttoned assuredly low and with pants that have more zips than a highschooler’s bag. If he’s not there, he’ll be out back carving the meat. “I cut it every morning still.”

Don’t worry if you haven’t got experience buying meat of this standard – Osawa will talk you through it. One tip, though: don’t go straight for the most expensive cuts, they’re between $200 and $300 a kilo and are ultra-marbled steaks. “We go up to marble score of 11 [in Japan a score rating goes to 12, but in Australia it goes to A5]. That’s too much,” he says, laughing. “There’s not much red meat left, it’s just fat. To be honest, it tastes like you’re eating a piece of butter.”

Want to know more about Japanese Wagyu? Read this story.