You may assume that ice cream makers endure a dry spell during the cold winter months, but that’s not the case. We search around town to find ice creams that make the most of the cooler season’s flavours, from cinnamon to almond cake to citrus. 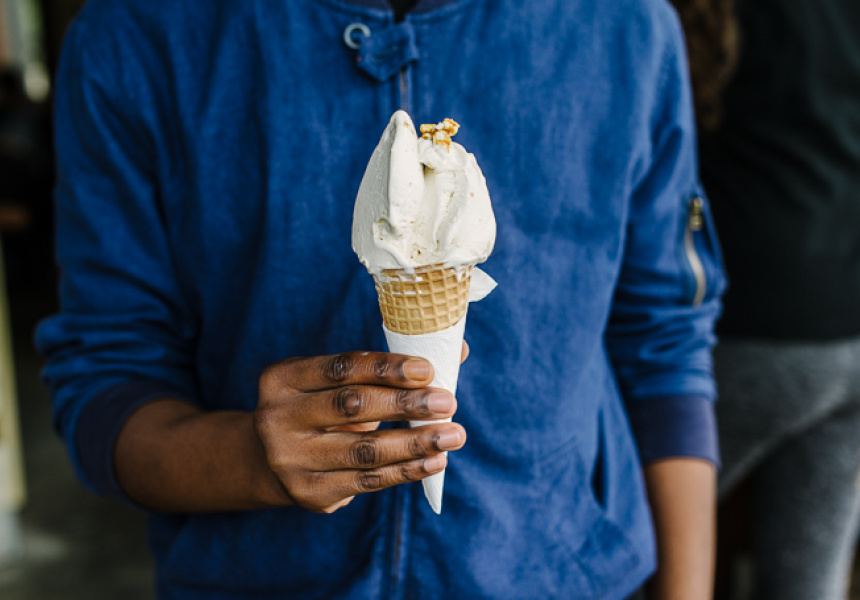 The temperature may be dropping, but there’s no need to go without your favourite summer treat just yet.

Sydney’s gelato bars and ice cream connoisseurs are dreaming up new menus filled with rich flavours and seasonal ingredients to keep us satisfied through the cooler months.

Pull on your winter gear and get your hands on one of these winter specials.

Frangipani Gelato Bar – apple pie gelato
Opposite the ferry wharf at Cronulla, Frangipani is now serving a chilled take on apple pie. Using green autumn apples, a would-be pie filling makes way for a pastry-free alternative. “We spice them up with cinnamon and mix that through vanilla bean gelato,” says manager Maria Fotoulis. “Everyone wants something a little richer in winter.”
117 Cronulla Street, Cronulla
frangipanigelato.com.au

Serendipity Ice Cream – pear and rhubarb crumble ice cream
If one scoop just isn’t enough, take home a tub for dessert from Serendipity. Their pear and rhubarb crumble ice cream, made with poached fruit and chunks of crumble topping, won a gold medal at the 2012 Sydney Royal Cheese and Dairy Show. Meanwhile, they also use semi-dried figs to create their sticky fig and honeycomb flavour for another wintry sugar fix. Both are available in 130 or 500-militre containers.
333–339 Enmore Road, Marrickville
serendipityicecream.com.au

Gelato Messina – Quincy Moorhouse
Their cryptic ‘Quincy Moorhouse’ special is code for fior di latte gelato, a milk-based flavour through which they mix homemade quince paste and almond cake. “Sometimes you just feel like making something that’s an interpretation of a winter dessert and turning it into a gelato,” says owner Declan Lee. How do they come up with the names? This one is a tribute to a British colleague, whose nickname ‘Quincy’ inspired the new creation – he recently returned from an overseas stint, perfectly timed with the fruit’s winter season.

Cow & The Moon – popcorn gelato
“If you go to the cinema and can’t decide if you want a choc top or popcorn…well, we’ve kind of done both,” says Sam Crowl, manager at Cow & The Moon. Their popcorn flavour takes popcorn made onsite, which is then covered with caramel, broken up and mixed through a buttery, slightly salty cream-based gelato. “We made it on a whim and people haven’t stopped asking for it since.”

Pompei’s – mandarin sorbet
Fans of fruit flavours can head to the beach for mandarin gelato. According to Pompei's owner George Pompei, "It's about using the best that nature has to offer and celebrating seasonal variety." At their peak right now, the Bondi gelato bar is whipping this oft-underrated citrus into a wintry alternative to the classic lemon flavour.
126–130 Roscoe Street, Bondi Beach
pompeis.com.au

Gelatiamo – rum and raisin gelato
Sometimes the chill calls for something spiked. Gelatiamo makes rum and raisin gelato by soaking raisins overnight in Captain Morgan dark rum, reserving the leftover liquid to flavour the gelato itself. “When you bite into the raisins, there’s a big burst of rum that comes through,” says Nikky Tsang, co-owner and gelato maker. “During summer we make more fruit flavours and sorbet, but in winter we like to make heavier, heartier flavours.”
362 Pacific Highway, Lindfield
gelatiamo.com.au