The founders of Chica Bonita, Rollers Bakehouse and The Funky Bunch have teamed up on a new bottle-o named after a botched Johnny Depp tattoo. 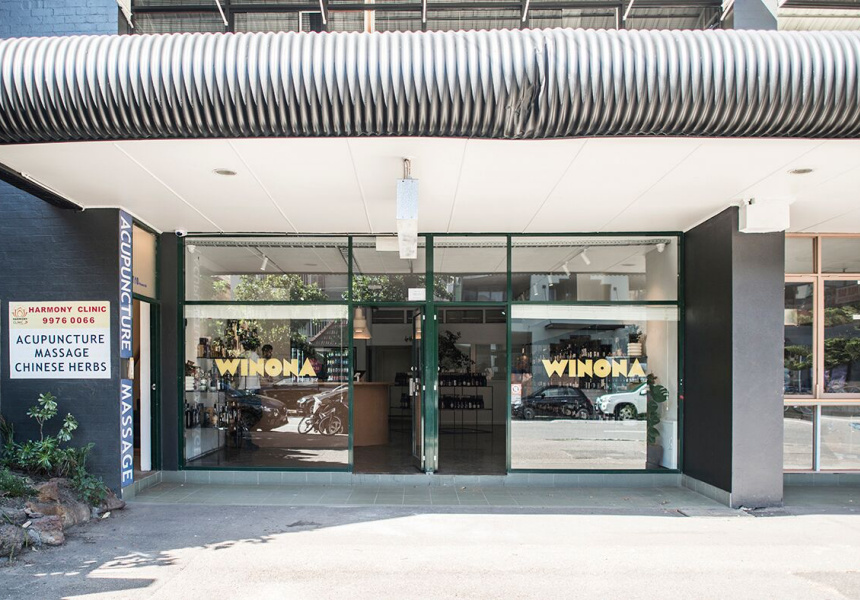 Natural-wine drinkers can often fondly recall their first drop. For Elli Walsh of Winona wine store, it was a 2013 Domaine Lucci Noir de Florette made by Anton van Klopper – one of the original maverick vintners in the hilly utopia of Basket Range, in the Adelaide Hills (most will know Klopper for his Lucy Margaux wines).

“He's a bit of a legend in the natural-wine world. And he makes some pretty funky experimental stuff. And I guess that stands out to me as my first memory because it was so challenging. It did definitely shatter my expectations of what a wine can be,” Walsh says.

Walsh is among the stellar team behind Manly’s Winona, which opened mid-April and is named after the tattoo Johnny Depp got that said “Winona Forever” but was changed to “Wino Forever” after his break-up with fiancée Winona Ryder.

“We’re [selling] small-scale producers working with organic, biodynamic or sustainable practices in the vineyard, and then [with] minimal intervention in the winery,” she says.

This means grapes fermented naturally, then bottled unfined and unfiltered with zero additives – and definitely no preservatives (except maybe a little sulfur, which occurs naturally in wine). Most people don't know that in Australia more than 50 organic and non-organic chemicals can legally be added to wine without being disclosed on the label.

“Natural wine doesn't really have very strict parameters in terms of definition, so it’s good for us to just say, ‘Okay, this is our benchmark’, and then narrow down from there,” says Walsh.

While it’s easy to find these styles of wine in many Sydney restaurants, bars and more and more in bottle shops these days, minimal intervention drops haven’t been widely rolled out across the Northern Beaches. “For a long time we’ve had a passion for this kind of wine and a kind of desperation to bring it to an area where it didn’t really exist until now,” Walsh says.

By day, Elli is an arts writer and her husband Cam Walsh (also part of the Winona team) works in the music industry, but they made a bit of a name for themselves on the natural-wine circuit when they founded (the now-defunct) The Funky Bunch in 2016, blogging about the exciting wines they were drinking as well as hosting tasting events.

“We’d profile all the wines that we were loving and try to convey the information in a concise manner for people to better understand that kind of wine,” she says.

Their tasting notes – which you can now see on Winona’s Instagram account (formerly published under The Funky Bunch) – have a way of cutting through wine lingo’s traditionally impenetrable cuffs in a creative, light-hearted and easily digestible manner, painting a visual of what comes to mind when the drop hits your tongue. Their writing is also as much about sharing stories of the winemakers and their wines as it is about supping a tasty drop. “Acidic, taught and textural, it has the endurance of an athlete – lingering long after each sip in your mouth and mind,” they say of Denavolo’s 2016 Dinavolino Vino Bianco.

“We’re trying to educate people about these wines that are really unfamiliar and trying to bring awareness around what goes into each bottle and why it’s important to be supporting producers who are working in this way,” explains Walsh. “Not only in terms of being better for the environment and for the makers themselves, but also better for you as a drinker.”

Elli and Cam have teamed up with mates Bo Hinzack (Rollers Bakehouse, Showbox Coffee Brewers) and Luke Miller (Chica Bonita, Sunset Sabi) – both locals already influencing the food and wine scene in Sydney’s north – to open the shop. The Manly bottle-o is continuing the “that’s different” approach that Hinzack and Miller have perfected at their respective venues.

In-store, you’ll also find craft beers (from the likes of Two Metre Tall, Brouhaha and La Sirène) and artisan spirits (including Aeijst gin and Clumsy Bear vodka), as well as a selection of handmade objects from artists around the world. The wines hail from Australia, Italy, France, South Africa, Georgia and other countries. “I find once you drink this kind of wine you kind of never go back,” says Walsh.

Elli Walsh’s wine picks
“Momento Mori’s 2017 new release Rosso. It’s 100 per cent organically farmed and co-fermented … it’s very easy to drink. It’s a super small production. Cam and I have visited [winemakers] Dane and Hannah [Johns] in Victoria over the past couple of years and are always inspired by how they pour their heart, mind and soul into each bottle.

“We just received a drop of Gut Oggau, which is a 14-hectare biodynamic estate run by Eduard and Stephanie Tscheppe in Burgenland, Austria. Cult wines, very rare and very pure. The labels visualise different members of their family to denote the different personalities of the wines.

“The Borachio Autumn release ... Organic fruit, nothing added and nothing taken away, always delicious and slightly off-centre.”