Will Bon Pavilion Turn Gosford Into a Dining Destination?

A Central Coast entrepreneur hopes so, with a heavy-hitting chef, seven dining options and a grand staircase in the works. 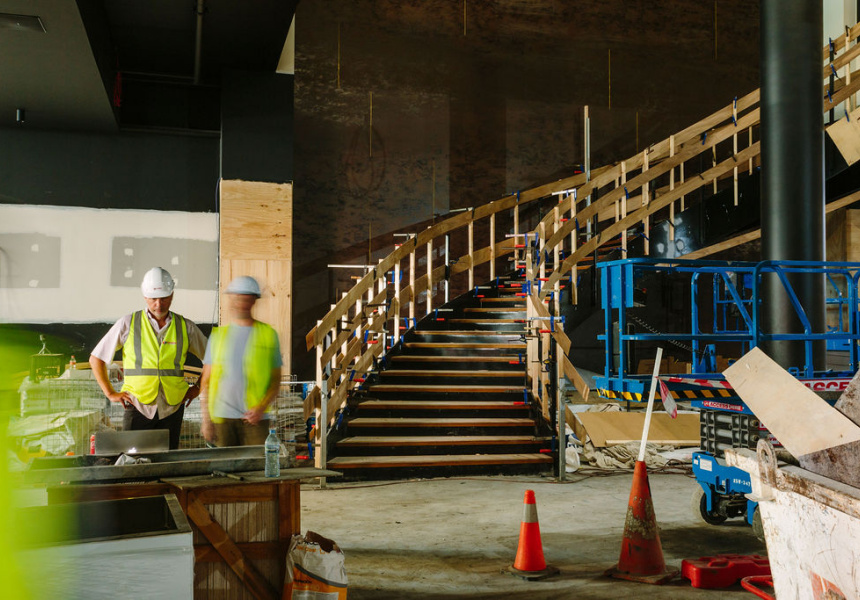 Entrepreneur and Central Coast local John Singleton is hoping his Bon Pavilion will entice Sydneysiders to the area, just as other pavilions in Coogee, Manly and Balmoral have achieved success.

When it opens in April, the Bon Pavilion will have seven distinct dining areas and a heavy-hitting chef, and will be a short stroll from the Gosford waterfront. The new gastronomic temple will slot into the ground floor of Singleton’s new 14-storey luxury development, Bonython Tower.

Brian and Karina Barry, from Bells at Killcare and Pretty Beach House, have been brought in to manage the venue, which will include a bon-anza of spaces (boom, tish), including Bon Bon Espresso Bar, Bon Bar, the Bon Vin wine bar and an upscale restaurant called Bonfire.

“It will be open plan, so as you walk into the building you’ll be able to see it all at once,” says Brian Barry.

The main event will be the restaurant, which will be led by executive chef Sean Connolly, who is also at Sydney CBD’s Morrison Bar and Oyster Room and Sean’s Kitchen in Adelaide. “It will be more gastropub than traditional fine diner,” explains Barry. “The menu will look quite simple, but there’s a lot happening behind the scenes, and a lot of thought going into each dish.”

While the menu is still a work in progress, premium steaks will be a feature, which makes sense given that Connolly also owns a premium steakhouse in New Zealand. There will also be plenty of seafood options, including freshly shucked oysters from Australia’s best oyster farms and locally caught fish.

Connolly has handpicked his team, which is already at the venue preparing for the launch. “He’s sourced some incredible talent from Sydney. They’ve all worked with Sean in some capacity over the years,” says Barry.

While the interiors are still taking shape, the fit-out will include floor-to-ceiling windows and high-end furnishings, from leather sofas and marble surfaces to a striking statement staircase made from spotted gum. “It will be very Central Coast, with inspiration coming from the surrounding bush, rather than the beach,” says Barry.

“The colour scheme will be very much related to the bush, and the people who live in the area and spend time in the national parks will pick up on these tones straight away.”

The Bon Pavilion is slated to open April 4.