Why Aren’t We Paying More Attention to PS40?

This distinctive CBD cocktail bar does something you won’t find anywhere else in the world: it brews and bottles its own sodas from scratch. We think that’s worth talking about. House-made products have long been a fixture in the world’s top bars. They usually improve on what’s commercially available and add a personal touch to otherwise familiar drinks. Bartenders also get a creative kick out of making their own stuff, whether it’s aromatic bitters, fruited syrups or falernum, the spiced sugar syrup used in tropical drinks.

PS40 takes this idea to the extreme.

If you’ve visited this stylised black-and-white room off Skittle Lane, you’ll know what we’re talking about. You’ll have noticed the lab-like set-up in the corner, dominated by a 500-litre stainless-steel tank. It’s here that owners Thor Bergquist and Michael Chiem make and bottle their own sodas – 5000 a week. And we’re not talking about plain old lemonade. PS40 specialises in such magnificent oddities as native wattle seed cola made with real kola nuts, vanilla, cassia, nutmeg, star anise, lavender, coriander, ginger and citrus zests. Other regulars include a “bush” tonic water that uses lemon myrtle and native lemongrass alongside the usual quinine, and a smoked lemonade produced with help from LP’s Quality Meats (it’s “definitely not vegan”).

Other bars around the world make their own soft drinks, but none do so at this scale or with such dedication. As much as PS40 is an outstanding cocktail bar, it’s also the headquarters for a burgeoning craft soda brand – one whose handiwork is now found at Acme, Firedoor, Saint Peter, Cirrus, Lumi, Bennelong and many other great restaurants in Sydney. Why aren’t we talking about this more?

“A lot of my background is high-volume cocktail bars,” says Berquist, who grew up in Auckland before going on to work at several spots of note: Der Raum in Melbourne, The Tippling Club in Singapore and Experimental Cocktail Club in London and New York. It was at these last two he got involved with soda. “I’ve really been hands on with the creative process. I love to create my own ingredients – ferment things, make things bubbly, do infusions. I wanted to do something that wasn’t necessarily alcohol-based, but still involved hospitality,” he says.

He and Chiem met in 2014 while both working at Bulletin Place. Chiem was already well known in Sydney from his time behind the bar at Lobo Plantation. By mid-2016 the duo had come together to open PS40. It still looks and feels radically different from every other bar in town. The fit-out is the work of Lívia Lima, a Brazilian-Australian graphic designer and typographer. Experienced eyes will recognise the vaguely Tron-like aesthetic as inspired by the Memphis Group, an Italian collective that formed in the ’80s to design postmodern buildings and furniture using then-novel materials such as plastic laminate. Its work was typically colourful, abstract and asymmetrical – the perfect fit for a concept as singular as PS40’s.

“We tried to open PS40 and launch the sodas at the same time. The bar was easy – we’d done bars – but production and manufacturing, we had no idea,” Bergquist says. “It was difficult. We made a lot of mistakes.” When the guys purchased their first pallet of 5000 bottles, for example, they didn’t realise how much space it would take up and had nowhere to store it. “We got it sent to my apartment in Bondi,” Bergquist says. “They sat there for about two months in my car park, slowly leaning over more and more every day, right into the next-door neighbour’s car.”

Even now, with PS40 approaching its third birthday, the production process is painstakingly manual. For a typical 500-litre batch, the team zests 150 lemons and limes by hand. The bar later juices that same fruit for use in cocktails. Most laborious, though, is the process of peeling and grating the 15 kilograms of ginger that goes into every batch of Blackstrap Ginger (molasses, lemon, allspice, Murray River salt). “We bought a Vitamix, which made our lives easier,” Bergquist says. “But we’ve just broken it, so we might be going back to hand for a couple of weeks.”

These prepared ingredients are typically cooked down with raw cane sugar, then pasteurised – twice – and filtered to remove larger particles and improve shelf life. Preservatives: nil. “It’s kind of going back to the old way soft drinks used to be made,” Chiem says. Carbonation takes place over 24 hours, at one degree Celsius and 40 pounds per square inch (psi) of pressure – hence the name PS40, which also refers to Skittle Lane’s location at 40 King Street. Thankfully, the bottling process is handled by a customised machine imported from Oregon, USA.

This entire process takes three days. By using the site almost around the clock and overlapping certain stages, the team crams in three batches each week. Chiem, who looks after the bar, typically finishes work at 1am, and Bergquist generally gets to start product around 6am. Bartenders check on the tanks throughout their shifts. But again, things still go wrong.

“We’ve blown seals off tanks,” Bergquist says. “There was one shift where I was bottling while the tank was spraying lemonade all over me. That was an exciting time, actually,” he says wryly.

“The team that does soda is affectionately known as ‘The Sticky Boys and Girls’,” Chiem says.

So why go to all this trouble? Why not just buy in Schweppes or Capi mixers like almost every other bar? “There’s a bit of a disconnect,” Chiem says. “A lot of companies are trying to make sodas for all types of demographics, whether it’s retail, whether it’s for bartenders, whether it’s for cafes.”

This one-size-fits-all approach isn’t right for every bar, and certainly not for PS40. Chiem and a small but growing number of his peers prefer working with the more nuanced products coming out of here. Regardless of whether they’re combined with alcohol or not, PS sodas have more going for them. Just like a good wine, they have distinct beginnings, middles and ends on the palate. This has made the range popular at Kittyhawk, Archie Rose and Ramblin’ Rascal Tavern in Sydney, and at Black Pearl and the Everleigh, two of the best cocktail bars in Melbourne.

And yet, this seems like an undersized group of supporters, which Bergquist puts down to PS’s lack of marketing and relatively low production volume. The team has no sales reps and relies entirely on word of mouth. There’s also price. A bottle of PS Soda goes for about the same as one from Fever Tree or East Imperial (two other premium mixer companies) but about double the cost of one from Schweppes or Capi. That difference adds up when a bar is serving hundreds of cocktails a night.

But bigger things are on the horizon – soon. Bergquist and Chiem are adding an off-site factory to the business, which will boost output to 30,000 bottles per week. The team will still be doing everything there by hand, but without having to work around the bar’s schedule, it will be much easier. Watch this space.

This might just be the step PS40 needs to reach critical mass and become Sydney’s mixer of choice. In bars, yes, because that’s the world the duo inhabits. (“The most satisfying thing for me has been seeing what other people do with our sodas,” Bergquist says.) But also unrelated businesses in Sydney and beyond, such as the Melbourne furniture store that made contact last month looking to stock PS Soda. That might just be the kind of wider, more general platform PS40 needs to generate the hype it so deserves.

This article first appeared on Broadsheet on March 01, 2019. Menu items may have changed since publication. 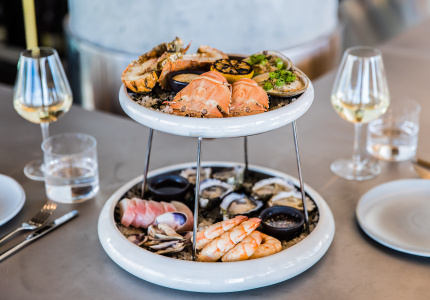 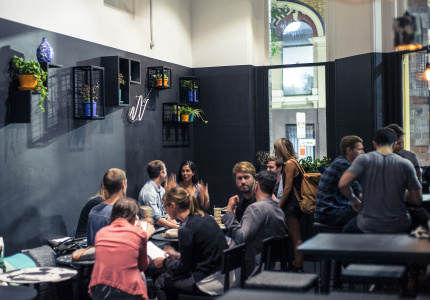