What is Happening with Burger-Patty Regulations?

Are we going to have to eat dry, well-done burgers, or has this been blown out of proportion? 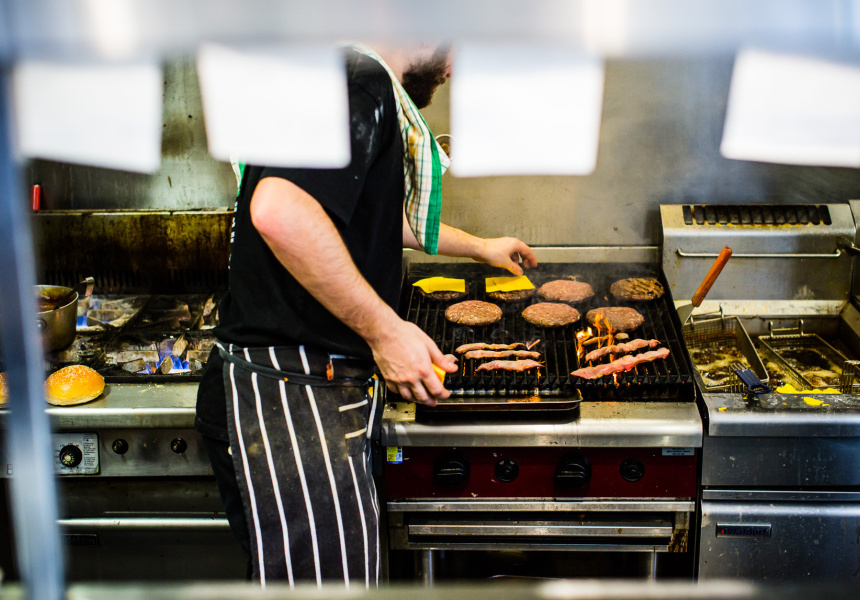 Last Friday, the NSW Food Authority (FA) posted a document of guidelines on hamburger food safety to its Facebook page. “In order to reduce the potential for food-borne illness, minced meat should be cooked right through to the centre. No pink should be visible, and juices should run clear,” it said. Word spread, and soon the burger community was flooded with chefs and burger fans venting their anger at the guidelines, and wondering whether or how this was going to be policed.

These reactions give you a flavour:

“It's a fucking ridiculous rule.” – Jake Smyth, owner of Mary’s.

“I think this is quite serious and could potentially change the dynamic of the Sydney burger scene.” – Josh Arthurs, owner-chef at Burgers by Josh.

“I think it's a joke.” – Warren Turnbull, owner of Chur Burger.

“The whole point of what we do is to become the best that we can be. If there's no point in using these good quality products, then what's the point in being a victim?” – Charles Curnow, owner of Chef’s Kitchen.

Despite the anger, confusion and nerves, the guidelines themselves are nothing new. “There hasn’t been a change in requirements; this advice has been provided consistently by food-safety authorities in Australia and overseas, including the NSW Food Authority,” says a NSW Food Authority spokesperson. The reason they were published was in response to local-council health inspectors expressing concern to the FA about potential health risks in relation to the increase in businesses serving rare or undercooked burgers patties. The document is a tool to aid council health inspectors identify potentially unsafe practice.

For most serious burger chefs, serving patties with at least a partially pink centre (medium–medium rare) is considered essential to bringing out the best flavour of the meat. “If you overcook the patty, you've got no flavour, the texture becomes rubbery, and the patties do run the risk of drying out and becoming crumbly,” says Curnow. “With all the effort we go to to make these patties, and to put these burgers together, it kind of makes the entire endeavour redundant.”

According to the FA, the risk in serving pink patties, or any meat that hasn’t reached an internal temperature of 71 degrees Celsius, is the development of harmful bacteria, such as E. coli. “The NSW Food Authority is not aware of any meat-processing plant that will provide certification that their mincemeat is pathogen-free. As such, we would always recommend cooking mincemeat products to 71 degrees Celsius,” says a NSW Food Authority spokesperson.

The problem many burger fans and chefs have with the guidelines is that they believe it is unlikely that meat will develop harmful bacteria. The FA document cites a US study. It outlines the amount of illnesses caused by meat-based bacteria per year. In 2015 there were 37 cases of illness and zero deaths in the US. In 2014, there were three cases of illness and one death. That means in the USA you’re more likely to be struck by lightning than develop E. coli-related illness from undercooked burger meat.

While E. coli is certainly not the only pathogen that can develop in meat, members of the burger community feel this isn’t sufficient evidence to outlaw medium-rare patties, particularly considering the extreme level of effort chefs are putting into the preparation of their patties. "We take all the care. If you’re grinding your own beef, which we do at Mary's, you know every single step that patty has been through before it gets to the customer’s mouth,” says Smyth. “I can stand here with absolute pride and say we fucking know what we’re doing, this is fine, this is top-grade beef, here you go, put it in your mouth and eat it rare.”

“It just feels like something that's blown out because of something that's happened in other countries,” says Turnbull. When asked for a more localised data set, an FA spokesperson said the government organisation hadn’t received a single report of illness or hospitalisation in relation to burger patties in NSW.

Despite this, council health inspectors have the power to issue $1540 fines (only issued following prior warning to improve conditions) to any burger restaurant deemed to be serving unsafe patties. The worry for burger chefs is how likely this is to happen. City of Sydney, the council that presides over the biggest population of Sydney burger restaurants, refused to comment. Whether burger restaurants will have to change their practices and start cooking well-done patties, or whether this is not nearly as serious as some think it is, is at the moment unclear.