What to Eat and Drink at Rootstock Sydney

Plus a not-so-secret party from the Attica crew. 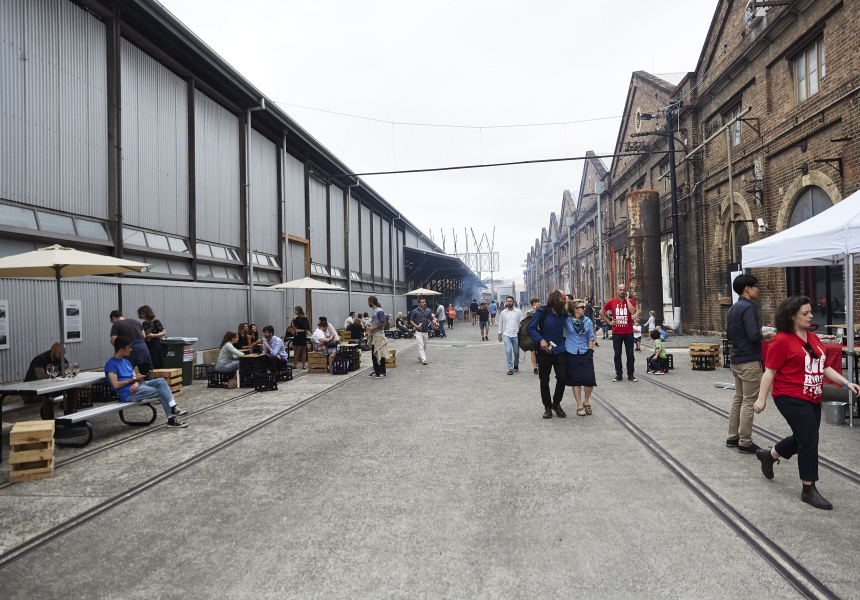 Rootstock hits Carriageworks again this year – the fifth instalment for the sustainable, not-for-profit food and wine festival centred around organic and biodynamic wine and produce.

Alongside minimimal-intervention wine tastings and talks, dining will come courtesy of an incredible line up of some of the country’s best and most interesting chefs. With all-day dining curated by Cafè Paci’s Pasi Petanen, there will be a four course lunch by Orana’s Jock Zonfrillo, dishes from restaurants including Ester, Billy Kwong and Chat Thai, and many more, as well as an ‘anti fine dining party’ from Ben Shewry of Attica.

The talks will be on natural winemaking, food fermentation and Indigenous agriculture, and a crowdfunded sustainable kitchen will be donated to three Indigenous communities when the festival wraps up.

We spoke with festival co-founders Giorgio De Maria and James Hird to get the low-down on the most exciting dishes and drinks to try this year.

Spiedo Bresciano by Alessandro Pavoni (Ormeggio at The Spit)
Spiedo Bresciano roughly translates to Brescian rotisserie; a traditional specialty of the Brescia province in Northern Italy. Pavoni’s version will consist of pork neck, quail and duck wrapped in pancetta and sage and slow cooked over charcoal for 6 hours.

De Maria and Hird recommend pairing this with the 2012 La Stoppa Ageno, an orange wine from Italy.

Try the panino with a glass of Two Metre Tall’s Cleansing Ale; a crisp, aromatic ale with bright, fresh acidity.

Turmeric Chicken with Som Tum by Palisa Anderson (Boon Cafe & Chat Thai)
Anderson creates this Thai-spiced chicken dish with produce from her farm, Boon Luck Farm Vegetables, and organic, pasture-reared Burrawongain chicken. The chicken is quartered and marinated in turmeric, then grilled over charcoal and served with cucumber, chilli and som tum.

A glass of 2016 Terpin Pinot Grigio (an unusual pink-coloured Pinot Grigio due to skin contact fermentation) handles the hefty spices in the dish well.

A great match for this dish is the Two Metre Tall Ambigua Farmhouse Ale, a Tasmanian beer brewed from farm grown, foraged or naturally present ingredients.

Australian Spiced Hills Hoist Chickens, BBQ Kale, Pressed Eucalyptus Potatoes by Jock Zonfrillo (Orana, Bistro Blackwood)
The Adelaide-based Zonfrillo’s obsession with ingredients indigenous to Australia will be reflected in a four-course lunch and conversation with the chef himself. De Maria and Hird believe this dish will a standout; the chooks will be cooked whole, and stuffed with a farce made of heart and liver.

De Maria and Hird suggest pairing this with an off-dry sake from Black Market Sake.

Try it with a glass of the 2013 ‘Coenobium Ruscum’, a wine imported by Fratelli Paradiso that works well with the cheese in the dish.

Ripponlea Riots by Ben Shewry (Attica)
Attica’s mysterious ‘anti-fine dining party’ is a major drawcard for the 2017 festival, and it’s possible there is no better poster boy for sustainability in food than Ben Shewry.

“(Sustainability) should be like a basic human instinct,” Shewry says. “If you love eating then you love ingredients, therefore you should be passionate about nature and want to eat food that is produced, caught, gathered and harvested by people who apply the best practise possible to everything.”

Shewry and a small team from Attica will host seven 30-minute events, the details of which he’s keeping close to his chest, though they are described as ‘not for the easily offended’.

“It will be a complete surprise,” he says. “Giorgio (De Maria) has given us free reign to create whatever we want.”

Rootstock Sydney is on November 25-26 at Carraigeworks.

Broadsheet is a proud media partner of Rootstock Sydney.