Welcome to the Club

Bowls clubs, rowing clubs and RSLs across Sydney are repositioning themselves as hospitality destinations to attract new members and reverse decline. Can upmarket restaurants save our community clubs, or are we just witnessing their death throes? 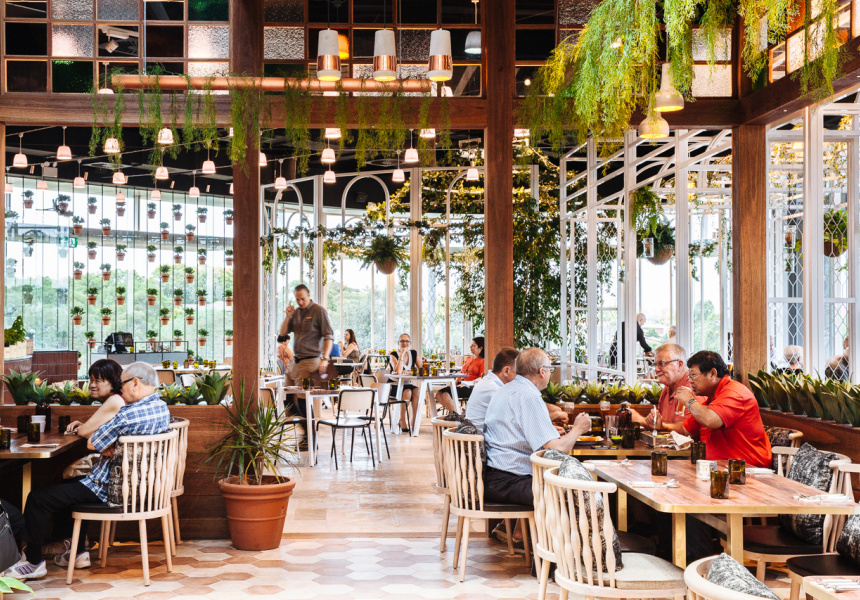 No matter where in Sydney you live, you’re bound to have noticed the swathe of community clubs renovating and rebranding themselves. From The Greens in North Sydney to District 8 at Cabra-Vale Diggers Club, there have been at least a dozen of these facelifts in the last few years.

Declining gambling revenue – traditionally the largest earner for community clubs – is largely responsible for this trend. In 2008, for example, the Productivity Commission found the average Australian club generated 61 per cent of its total revenue from gambling. That percentage has been in freefall ever since, thanks to indoor smoking bans, caps on pokie numbers and the rise of online gambling.

Enter: the new community club or, as consultancy group Tully Heard call it, the “repositioned” community club. Established venues with stagnant membership and declining revenues are looking towards refurbished interiors and chef-designed menus to fill the gap.

A prominent example is the enormous Harbord Diggers, which was “no longer offering community members what they needed” says Greg Pickering, CEO of Mounties Group, which runs seven clubs across Sydney. After operations started to slow down in the early 2000s, Mounties stepped in and installed three restaurants, a bar and cafe.

Others, such as Bondi Bowling Club, are doing away with pokies all together. Olivia Carney, the club’s marketing and events manager, cites this as evidence of the success of the reboot. “The club now appeals to a much younger market,” she says. “Membership and revenue has definitely increased since the change, with visitors coming from across Sydney, not just the eastern suburbs.”

Such is the aim of these overhauls: engage a new audience. In 2010, the national club census (yep, it’s a thing) found 56 per cent of members were male. In contrast, stats from restaurant booking service Dimmi suggest women make 67 per cent of restaurant bookings. Natalie Krafczyk, director at Pony Design Co (responsible for the interiors at The Acre, The Alcott and The Fernery) says this disparity is front of mind when it comes to revamping a club – it has to appeal to female decision makers. “The ultimate goal is to create a space that is an identity in and of itself – it’s affiliated to the main club, but creates a completely different offering.” Often Pony’s work with a venue takes a staggered approach, and the company manages one piece of underperforming real estate at a time. This allows the club a more sustained, less risky reinvigoration in Sydney’s saturated market.

It’s not only gaming revenue that has taken a hit recently. “The game of bowls is in decline, in particular in inner-city areas,” says Dean Thomas, CEO of Canterbury-Hurlstone Park RSL Club. “Bowling clubs by their nature have challenges because the majority of their space is taken up by the greens.” In other words: they’re wasting large, valuable pieces of real estate. Camperdown Bowling Club – a subsidiary of Hurlstone Park RSL – certainly was. But last year it joined forces with Pocket City Farms to ditch the bowls altogether and become Camperdown Commons, a market garden and farm-to-table restaurant anyone can visit, no membership required. The site also includes a spritz bar, kiosk-style cafe, playground and chicken coop. “We had a series of about a dozen meetings where we invited the community to come to the club and have their say,” Thomas says. “And we changed our plans in accordance with some of the feedback we received. Camperdown Commons seems a long way away from a traditional club, but when you think about it as a concept, it’s still a community hub.”

Restaurateurs Adam and Emma Marshall of Bird and Bear Group took a similar approach at the Sydney Flying Squadron in Kirribilli. The club was in need of renovation and redirection, but they were conscious of balancing the desires of the current members with those of a new, more profitable audience. “Our head chef was incredibly excited about creating predominantly modern Mediterranean food,” Adam says. “It killed him to include a schnitty on the menu, but you still have to cater for that more traditional audience." Marshall notes club revenue doubled in the year following the revamp, and members benefited immensely from this growth. The same can be seen at Harbord Diggers, where the club has experienced a significant growth in membership since renovation, with more than 20,000 new members.

The Marshalls already have their sights set on two more such projects within the next six months: Mosman Rowers, recently saved from the brink of liquidation, and the RAN Sailing Association in Darling Point. Adam reckons clubs attract better customers than anywhere. “They come with a completely different attitude,” he says. “We take beautiful locations, with an audience that are completely engaged and want to be a part of that community, and we try and make the most out of that venue.”