With a blues and roots focus and bands playing free every night. 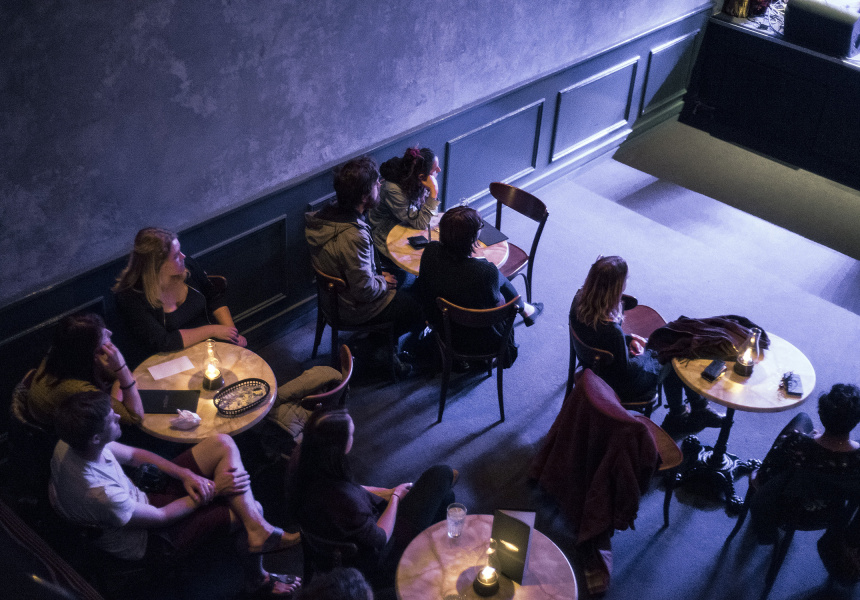 You could never see into Vanguard from the street. The red doors were always shut; you had to be let in by the ticket collector. But now those doors are wide open and it’s free to go in. Instead of burlesque there’s blues, bluegrass, rockabilly and rock. This is Leadbelly.

“The funniest thing is every local in the area is, like, 'I've lived here for six years, I've never seen the doors open’,” says Leadbelly’s general manager, Ben McFarlane. “There's also been a lot of confusion about why there’s no cover charge.” This isn’t a theatre anymore, he says; it’s a bar that also happens to have live music.

With new owners (former Establishment and Ivy operations managers Zac Davis and Luke O’Donohoe) the new venue has also had a complete facelift. For those who have history with the Vanguard, not much is recognisable. The velvet curtains, poster-plastered windows and red carpet are all gone. Designer AZB Creative has added a dark-blue coat of paint to the walls; neon signage; a long, wooden bar; and an upstairs lounge where the theatrical mezzanine was. “The only thing we wanted to keep was the stage,” McFarlane says.

It looks suitably weathered without looking worn, a style that works well with the venue’s new blues-and-roots-based musical direction. The food and drinks menu, on the other hand, is firmly entrenched in current bar trends, albeit with a few twists. The food has a predictably American slant with burgers, wings, fries, po’boys and crisp-based pizzas. Twists come in the form of a karaage burger with black sesame and kewpie mayo; a prosciutto pizza, oddly sweetened with fig jam; and fried calamari sprinkled with Szechuan salt. There’s also a free round of roast peanuts on arrival.

The drinks list has top-quality whiskey; semi-local beers, including a rotating house-branded tap by Montieth; and classic cocktails with seasonal flourishes. “I wanted to keep the cocktails simple but every drink has some kind of homemade element. Not trying to reinvent the wheel, just nice big flavours,” says McFarlane. Until it gets warmer the In The Pines cocktail with whiskey, ginger, pandan, honey, lemon and cinnamon fig hits the spot.