Ume to Bring Burgers to Barangaroo

Ume Burger has been announced as the newest commercial resident of The Streets of Barangaroo. 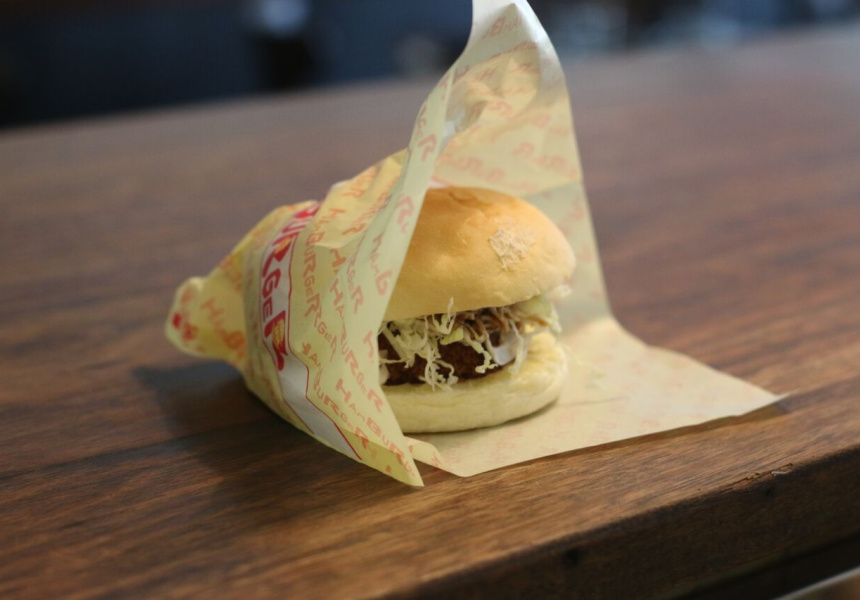 Soon, there will be no queues down Bourke Street to get one of Kerby Craig’s Japanese burgers. As of September 2016, Ume Burger will become a permanent resident at Barangaroo.

“We talked about moving the restaurant there,” said Craig. “But it wasn’t going to work. Then I told them I do these burger pop-ups on Sundays, and the penny dropped.”

Craig doesn’t want the expansion to reflect the Surry Hills restaurant, though. “I don’t want it to feel like Ume at all. I want it to feel more like a nice cafe,” Craig says. “It’s going to have the feel of a Tokyo burger shop, but no neon and without lots of colours.”

Burgers will include the Ebi (prawn katsu; Japanese tartare sauce; and shredded cabbage) and the Ume Cheeseburger (beef patty; American cheese; rice-vinegar pickles; mustard; Ume’s special sauce) among others. New flavours will be revealed at the opening. The menu will feature fan-favourite kombu salt chips, along with home-pickled kimchi; salads; and “onion rings like they do in Japan”.

“We’re going to do Hokkaido soft cream (a soft serve dessert popular in Japan), in lavender or pumpkin [flavours], not just matcha. But we will still have matcha, because matcha is fucking awesome,” says Craig. There will be beer and sake; wine by the glass; house-made yuzu brown-sugar lemonade; passionfruit and ginger sodas; and black sesame or azuki bean milk shakes.

The menu will change seasonally and sporadically, Craig says. “I’m the kind of person who gets bored, and I like to change stuff all the time.”

Gary Horwitz, head of retail at Lendlease, believes Craig encapsulates the innovative ethos of the new precinct. “Kerby pushed the boundaries fusing traditional Japanese ingredients and techniques with the simplicity and mass appeal of a humble burger,” says Horwitz.

“I don’t want people to think ‘burger shop’ and think ‘too grungy’ or ‘too fast food’. It’s still burgers and chips and ice cream, but I want it to feel a bit more refined,” says Craig. “The pop-up has gone so, so much further than we expected.”

Ume Burger will open at Barangaroo in spring 2016.