Local ingredients are spun into contemporary Korean dishes, including a Moreton Bay bug bibimbap, and a sweet-savoury soybean dessert resembling a corn cob. 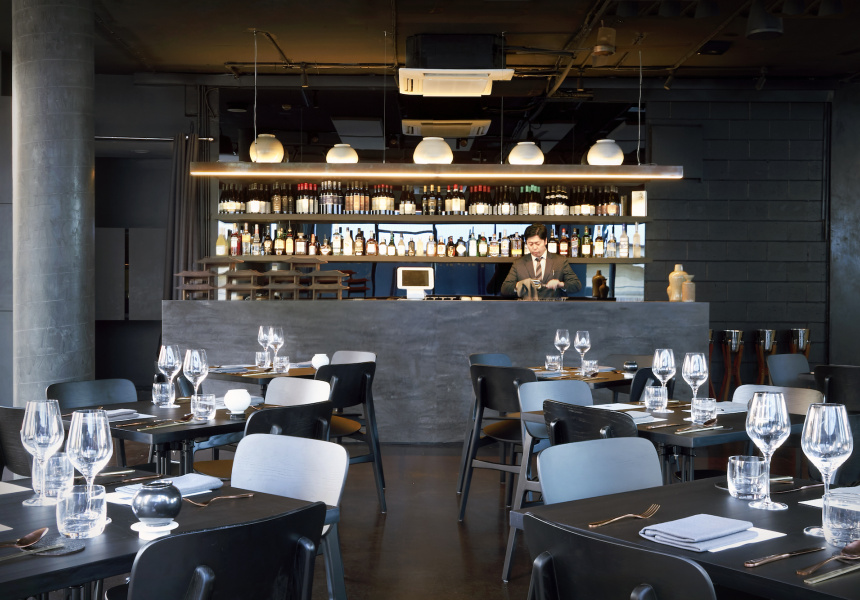 Step inside Jung Sung and it’s easy to imagine Sinatra’s New York. The fine diner, in the Old Rum Store above Chippendale’s bustling Spice Alley, has the swank of the city that never sleeps. There’s a sleek, moodily lit dining room, floor to ceiling glass and an outdoor terrace framing the city skyline.

“We wanted to give people a contemporary dining experience for two with matched wines for under $400,” Freene tells *Broadsheet. To that end, the six-courser with matching wines comes in at a reasonable (for Sydney) $178.

The duo came up with the concept in July 2020, in the early days of the pandemic. They opened in March with Insup Kim leading the kitchen. The Korean-born head chef cut his teeth at Michelin-starred restaurants in New York, before a six-year stint at Altitude restaurant in Sydney’s Shangri-La Hotel.

“If you go to any Korean restaurant, they are always cooking the same dishes the same way. I wanted to use local ingredients and see how they can work with Korean flavours. Finger lime with fish or if I need a nutty flavour, native macadamia,” Kim tells Broadsheet.

The Moreton Bay bug is delivered to diners “on a small table, the traditional Korean way”. It’s done two ways: poached in butter, with a blue swimmer crab jus and punchy side of truffle aioli; and as a bibimbap, the bug marinated in soy for two days and assembled with puffed grains, egg and micro chives.

The “catch of the day” changes dependent on what’s available at the market, and on the current spring menu comes teamed with a white asparagus puree and a delicate sliver of dongchimi (radish kimchi).

For the main course, diners can choose between lamb, a slab of 9+ marbled Wagyu or crispy pork, the latter paired with a tart brussels sprout kimchi.

The six-course degustation ends with two desserts: a custardy, savoury-sweet corn “cob” inspired by a Korean ice-cream, here made with mascarpone and doenjang (fermented soybean), and a lemon-basil ice-cream with berries and crunchy bee pollen.

More recently, Jung Sung has launched a late-night Korean tapas menu – think shoe-string fries with kimchi salsa and crème fraiche, and hwe, raw fish with a crispy topping of seaweed and the zing of gochujang. It’s also offering two-for-one cocktails from 5pm to 7pm, from Tuesday to Thursday.

“In Sydney, when people think of Korean restaurants, they think only of Korean barbeque,” says Kim. “This is a different way to experience Korean, both modern and traditional.”