Thee Oh Sees Back for Summer

They are the weird cousins of west coast garage rock and they’ve become a recent, explosively fun part of the summer experience. We speak with Brigid Dawson of Thee Oh Sees. 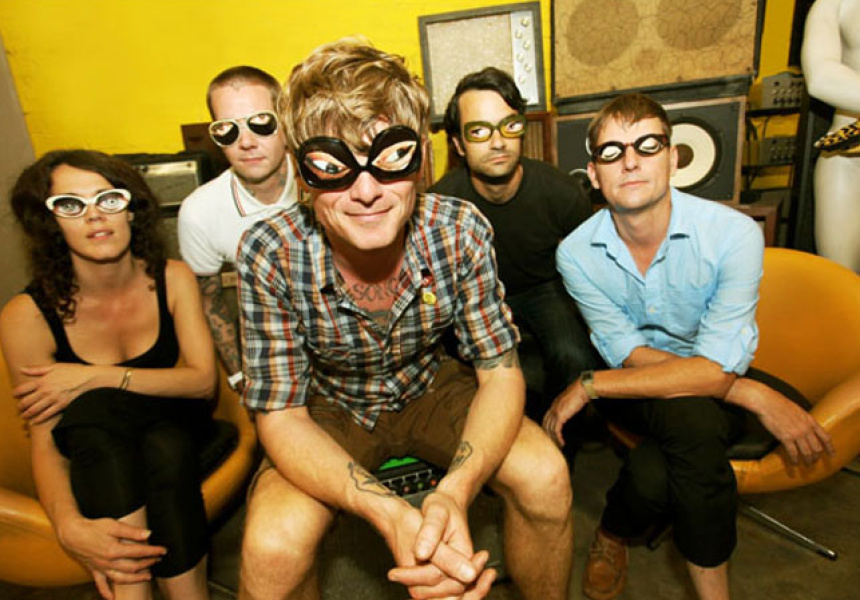 Again arriving on our doorstep in January – this time at the request of Sugar Mountain Festival in Melbourne – the band have swag of new songs to show off from this year’s crazed Carrion Crawler/The Dream record. Keys player and co-vocalist Brigid Dawson also confirms that they’ve recently expanded to a five-piece with the addition of a second drummer, Lars Finberg of Seattle post-punk groups A-Frames and The Intelligence. “We’ve just been writing some new songs, too, so we have been practising so that we can play them on tour,” Dawson adds.

Yes, there’s good reason to save some sweat for the new year.

Often regarded at the earthing rod to founder John Dwyer’s mangled take on garage rock melodies, Dawson joined the band when she moved from London to San Francisco following a relationship split nine years ago. The band’s name (which has endured many variations, including OCS and The Ohsees) was at that time a front for Dwyer’s froggy bedroom folk, recorded alone or with the help of friends.

Dwyer again explored life outside the band on this year’s Castlemania, an album that carries the group’s moniker but was largely written and recorded by Dwyer on a 16-track Tascam recorder in his former share-house.

That album’s birth was not indicative of the band’s regular writing procedure, which has yielded critically lauded records like 2009’s Help and that same year’s Dog Poison, which was released by the obsessed-over Brooklyn label Captured Tracks.

“Usually what happens is that John will bring in an idea, play it to us, and we’ll kind of flesh it out, basically just [write] our own parts,” Dawson says. “A lot of times when we’re recording, there’ll be extra time when we get to just fuck around and you’re in the swing of it, so often we’ll write stuff as well in the studio, which is really fun.”

However, making songs on the fly doesn’t assist in remembering them later, and writing tour set lists can result in having to “relearn” songs.

“Maria is one we’re trying to relearn right now,” Dawson reveals. “You have to listen back to them to hear the parts. Oh yeah, or open up the record and take the lyrics off the record,” she laughs. “[But] I also have books and books filled with the lyrics of our songs.”

The band has just wrapped up touring the USA with Melbourne’s Total Control, who supported them at the Tote last January. Total Control’s Mikey Young has also been on many stages with Thee Oh Sees in his other band, Eddy Current Suppression Ring.

“I’ve been hanging out with him a little bit, or I’ll run into him and we’ll have a beer,” Dawson says of Young, who has spent some time in San Francisco this year. “They’re good guys. We met those guys when they played out here maybe four years ago – it was Eddy Current and it was one of those gigs where you didn’t expect it to be great. We were just going to show up and play, but I remember all of us watching and just being like, ‘Who the fuck is this? These guys are amazing’.”