The King Cross Organic Market is feeding foodies with a wealth of uncomplicated, quality offerings. There are a few reasons to be up and about in Kings Cross at six o’clock on a Saturday morning, not all of them savoury. But for the folks who set up stalls at the thriving Kings Cross Organic Market, held each week in the shade of El Alamein Fountain in Fitzroy Gardens on Macleay Street, it’s all about getting ready for the first rush of the morning.

By 8am, an array of stalls selling everything from organic produce straight from the farm to French cheeses and truffle-studded saucisson sec (a French, air-dried pork salami) have popped up and Potts Point locals mingle with culinary cognoscenti from further afield as they enjoy the morning air, eat their way through three or four countries and stock up for the week ahead.

Reflecting its inner east locale, the crowd at the lively food and growers’ market captures the eclectic diversity of the surrounding streets while offering more than a passing nod to the small markets of Europe.

And while the words ‘organic market’ are enough to send a shiver down the spine of some city-dwellers, the market is as much about creating and reflecting a sense of community as it is about making a social statement.

“It isn’t all brown bread and sandals,” says Elizabeth Taylor, who started her first fresh produce market at Frenchs Forest 17 years ago and has since grown her Organic Farmers Markets business into a broader network of nine similarly styled markets that stretch out across Sydney’s suburbs.

“We try to really support the organic growers and producers, but by necessity some of the food is organic and some of it is conventional,” she says, adding that each stall clearly indicates on which side of that fence it falls. Taylor made her first foray into organic food markets at Spitalfields in her native London in 1992, before moving to Australia where she saw a similar opportunity in Sydney.

As the markets have grown, so too have the diversity of offerings. Turkish Gozleme are a hot ticket, while across the way, the Scampino family dishes up handmade Argentinean empanadas. Others elect to swing by Camille Richon’s stall and put together a selection of exquisite imported French cheeses, sausages and rillettes for an afternoon of indulgence.

At the Octoberfest Hut, owner Rob Pfrogner talks proudly of his prized currywurst as he turns brats and weisswurst on his barbecue while doling out firm advice on the best mustard to accompany each. Fluent French, Spanish and German banter adds extra authenticity as regulars return each week for a taste of tradition, while buskers offer entertainment and a little light banter of their own.

At the famed bacon and egg roll stall – the stuff of legend among many an occasionally over-imbibing local – honey port cured bacon and free range organic eggs are piled high on soft white rolls and the queue is constant.

“The key is in the product – it’s excellent bacon and fresh eggs, nothing more complicated than that,” says Peter Brownlee, who has been running the stall for more than six years and calls everyone from the Gastro Park boys to some of Rockpool’s kitchen crew his loyal customers.

A recent addition is the Garden Games corner, dedicated to all things board game with the simple instruction to ‘play the day away’. Some stop by with a croissant and coffee for a quick turn of Connect Four or Guess Who, while others opt for a lingering game of chess with a side of dumplings, after deliberating over ingredients for the night’s menu.

Sundays see the same space turn into bric-a-brac heaven, but if it’s food you’re after, make sure it’s at the top of weekend to-do list. If there’s a better way to while away a Saturday morning, we can’t think of it.

Find other organic food markets around Sydney at organicfoodmarkets.com.au and on Facebook. 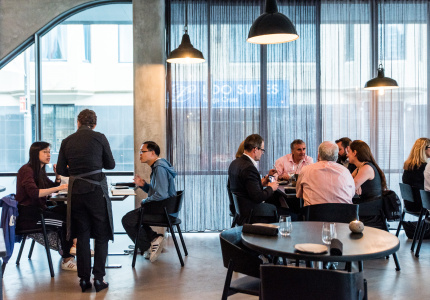