It’s been a big couple months for Asian food in this city. 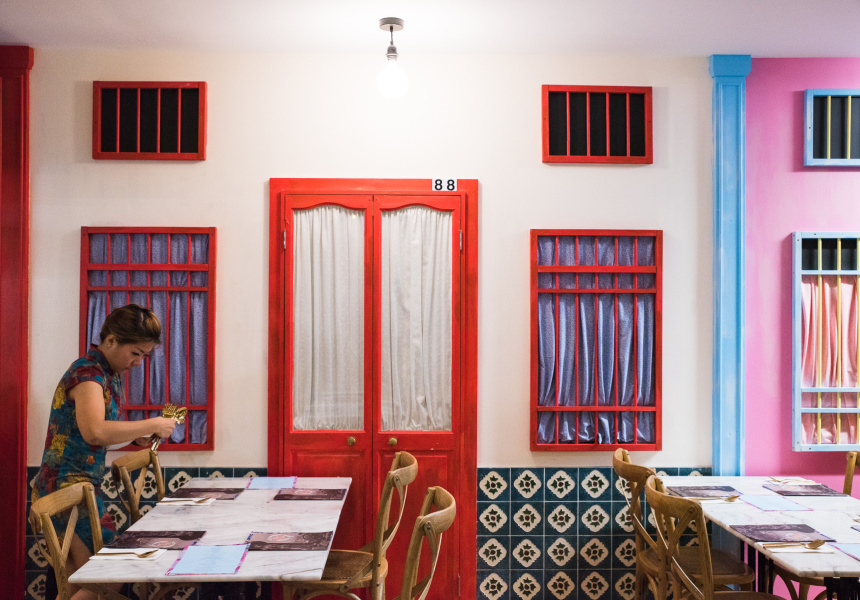 Dish
The first Dish opened in Toongabbie. And this second store in Glebe reiterates what the west’s Sri Lankan community loved about the original. In Glebe you’ll get Sri Lankan and South Indian classics such as kottu roti (roti chopped up and fried with egg and vegetables), dosa, biryani and hoppers (bowl-shaped crepes made with a fermented rice flower). And there’s barramundi ambulthiyal, barramundi marinated in tamarind and curry spices grilled in a banana leaf.

Spice World
Spice World is wacky. It has robots. It has Barbie dressed in Wagyu. It has Hello Kitty- shaped stock cubes. And it’s taking hotpot into bizarro, themed-dining territory. Gimmicky? Maybe. But it’s also delicious and a good time. Spice World’s signature is the traditional spicy soup: a broth of pork, beef and chicken bones seasoned with star anise, fennel seeds, dried peppers and Szechuan peppercorns. Also try the sides: ox gizzard, duck-blood jelly, lotus root and bamboo fungus. Then find one of the arcade games in the labyrinthine space lined with mirrors.

Nu Bambu
Nu Bamboo is in the Canterbury-Hurlstone Park RSL and is run by an ex-Longrain chef. If those two pieces of information seem incongruous to you, we understand. But it works. And with a ceiling sculpture made from hand-dyed, pleated crimson silk, the restaurant looks nothing like an RSL.

The menu is pan-Asian, modern and chef-y, but not stuffy. Thanks to his time at Longrain, chef Freddie Salim is a deft curry-maker. Also try his Thai salmon ceviche made with lean salmon topped with thick coconut shavings, coriander, mint and red nam jim. And the scallops served with meaty shitake and king mushrooms cooked in Salim’s master stock.

Punjab Fusion
Chef Kamaldeep Singh is serving the food of his home, the Punjab region in India’s north-east. Its cuisine is influenced by Pakistan and the Middle East and the food is rich; it uses lots of ghee, buffalo milk and buffalo butter.

Try the dal makhana, a black-lentil and red-bean stew mixed with fresh cream; the ghee-heavy dal tadka; or anything with mustard greens. There’s also the usual butter chicken and dishes from the tandoor oven, such as the chicken tikka and Indian flat breads. The big deal, though, is the kebab so finely minced it collapses in your mouth. It’s made by mixing pineapple and papaya paste with mutton mince.

Gingko Bar and Dining
Gingko represents the food of Harbin, a capital city in China’s north-east with cultural influences from Russia and Japan. The cuisine from this part of the world is no stranger to sourdough bread, butter, cheese and sausage. On the yum cha menu there is a flaky, buttery sausage puff filled with house-made, air-dried wine sausage and shallots. And a teriyaki-grilled unagi (eel) sandwich with pickled ginger, all wrapped in shredded pastry. Enjoy the spicier dishes on the menu (such as the hot-chicken popcorn) with the Tiki Tiki Weiwei, a drink made with banana skin-infused bourbon.

Ho Jiak
Business owner Junda Khoo’s memories of eating the food his grandmother made for him when he was growing up in Penang, Malaysia, feed straight into the menu here. As a kid he ate fried bean sprouts with salted fish, curry leaf-marinated fried chicken, and a dish of fried egg and preserved radish. At feast times it was about steamed whole fish with soy and shallots, and the steamed chicken with goji berries, soy, ginger and wild celery. And it’s all being served at Ho Jiak.

The large space has even been fitted out to mirror Khoo’s family home. The floors are lined with imported tiles, the walls with knick-knacks from Penang, and there are framed shots of Khoo’s family about the place.

Rey's Place
This is modern Filipino food. The small-plates section of the menu covers Filipino street food such as corn chargrilled on a robata wood grill, served with garlic butter and chilli. And deep-fried chicken wings stuffed with chicken adobo (a sauce of garlic, vinegar, paprika and oregano) mousse. Bigger dishes include slow-roasted suckling pig served with a sauce made with vinegar, onion, chilli, garlic and brown sugar. There are just three desserts on the menu; try the fried banana fritter with a Rey’s Place Old Fashioned, which is made with Don Papa Rum. It’s distilled in small batches from sugar cane grown on the island of Negros.

Gogyo
Gogyo’s ramen master and founder, Shigemi Kawahara, broke with Japanese traditions in 2003 by burning the hell out of the miso in his ramen. It’s the secret behind kogashi miso and the method is originally from Hakata, Fukuoka Prefecture, the tonkotsu ramen capital of Japan.

The result is a black, murky pond of ramen, the surface of which is rippled by a sheen of butter. It’s topped with chashu (barbequed pork), cabbage and a flavoured egg and has borderline-spiritual levels of umami punch. There is also more traditional tonkotsu ramen on the menu, as well as Wagyu sukiyaki spring rolls, kombucha edamame, “Japanesian” coleslaw and karagage chicken. But for the true back-alleys-of-Tokyo-face-flushed-from-pungent-steam experience, go the kogashi miso.

Solo Newtown
Brothers Alvin Saputra and Akbar Thais serve rendang with cheese in a quesadilla. And their mum reckons their charcoal chicken is burnt. What’s conventional in Australia or in Indonesia doesn’t matter to the pair a jot. They’re mixing what they like from Australian culture with memories of where they’re from, which is Surakarta, Indonesia.

This place also does brunch. There are pandan pancakes, Indonesian-Dutch hash-brown stacks, Brickfields bread and Welcome Dose roasted coffee. Lunch is toasties, fried noodles and gado gado. There’s a courtyard space and an upstairs balcony area, which in the day is flooded with sunlight and at night lets diners eat under the stars.

Hopper Kadé
Hoppers are Sri Lanka’s bowl-shaped answer to pancakes. The crisp dish is made from a batter of fermented rice flour and coconut milk. It’s then filled with spicy coconut sambals and curried meats and fish, and topped with a fried egg.

The hopper fillings served here combine Western ingredients with Sri Lankan flavours. There’s the spiced pulled pork and a 12-hour slow-cooked beef brisket. And a fish special. To drink try the mango lassi. It’s made with thickened yogurt, mango pulp, mango essence and a secret blend of spices. It’s refreshing after all that spice.