Sample cooking collaborations from some of the world’s greatest, make world-class cocktails and mingle with your culinary heroes at this inaugural food fest. The “super-sized concrete void” of The Cutaway at Barangaroo will be transformed into a magnet for eaters, cooks and the food-curious for four days in November when international immersive food festival Taste puts on its first Sydney iteration.

At Taste of Sydney Collective, the best of local culinary talent will meet its interstate and overseas matches, and attendees will taste the results and take away some world-class kitchen know-how, too.

Another Aussie doing great things overseas is Louis Tikaram of super-popular E.P. Asian Eating House in West Hollywood, among others.

IMG is the event company presenting Taste of Sydney. “You can expect some interesting and unexpected collaborations producing one-off menus,” says its culinary director Kristy Austin.

“The chefs will be preparing their dishes in the two Collective Kitchens, which are large, open spaces, specially designed for the festival, that allow visitors to watch the chefs cook, interact with them and then to try the festival’s exclusive signature dishes.”

There are six sessions spread across the festival, which runs Thursday to Sunday, and each will have eight chefs collaborating across the two kitchens, as well as cocktail masterclasses, butcher workshops and live music – Marty Doyle will be curating the soundtrack for each day.

Austin says it will be a “foodie playground” that blends food, culture and sound, and “the vibe will be intimate and casual with plenty of opportunities to learn and interact firsthand.”

One area of the festival – literally named The Play Ground – is a space to sample local produce and do some shopping. Attendees can also shake up a world-class cocktail (or two) with Tanqueray ambassador Krystal Hart; learn butchering basics, from where cuts come from, to the wines to pair them with courtesy Australian Good Meat’s Butchers Block; and take a breather with a whisky highball in the Johnnie Walker Whisky Room.

“This is a celebration of creativity on a whole through food, music and culture in Australia,” says Austin.

Taste of Sydney Collective is on November 8 to 11. Tickets start from $10. Book now. 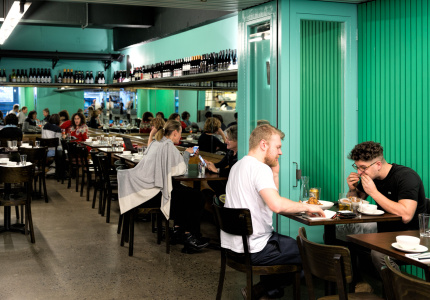