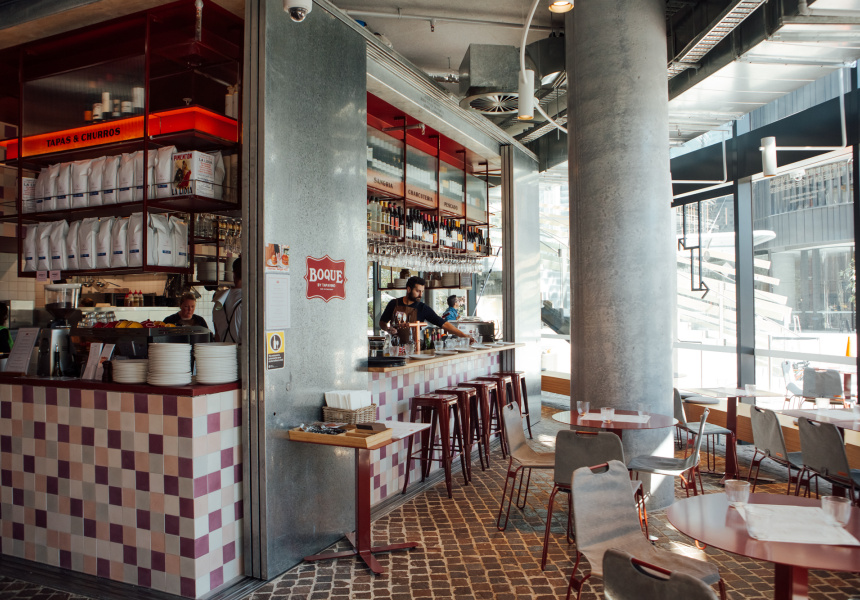 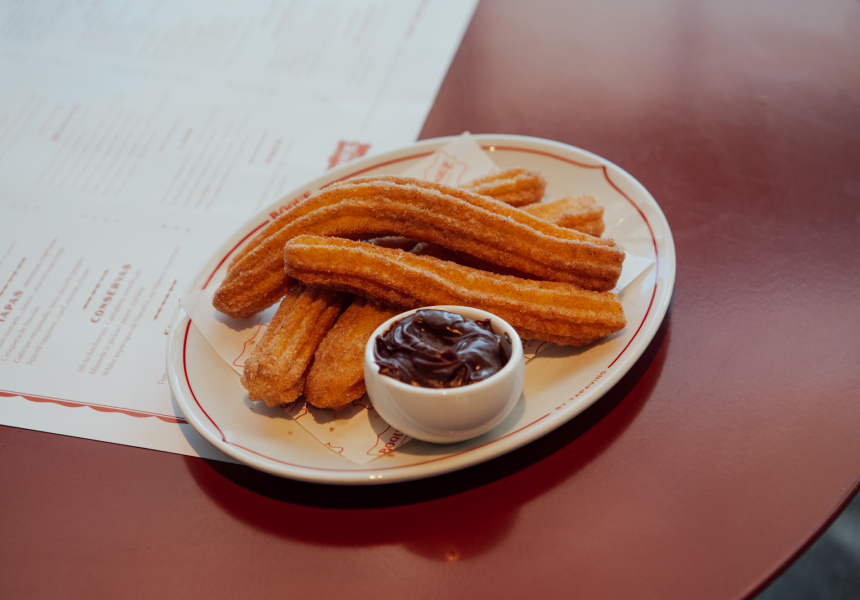 Barcelona’s La Boqueria, one of the most famous food markets in the world, is the inspiration for Tapavino owner Frank Dilernia’s latest venture, Boque by Tapavino, which has just opened in the upmarket food hall, Maker’s Dozen, in Haymarket’s Darling Square.

“The staff and I travel to Spain each year and we always end up at La Boqueria in Barcelona,” Dilernia tells Broadsheet. “I thought it’d be great to do something similar in Sydney.”

Just like the busy Spanish food hall, Boque is a stall rather than a restaurant – with pretty burgundy-coloured tiles and stools and an open kitchen so punters can take a seat at the bar and watch the action. “You’re [being] served by chefs and you can see a lot of the cooking,” Dilernia says.

The menu at Boque works in much the same way as at the other Tapavino outlets (there are now three, all in the city: the original in Bulletin Place, Balcon by Tapavino in Bligh Street and Born by Tapavino in Barangaroo) and is divided into tapas, charcuterie and jamon (Spanish ham), ensalada (salads), land, seafood, and sides.

While there are staples such as salted-cod croquette, jamon serrano (high quality dry-cured Spanish ham) and Galician-style octopus (cooked and served with kipfler potatoes, smoked paprika and drizzled with olive oil), new additions include a razor-clam omelette, white asparagus with ajo blanco (chilled almond soup) and a selection of conservas (tinned food) such as anchovies and mussels in pickled sauce.

For a quick bite there’s the classic Spanish dish patatas bravas (fried potato with spicy mayonnaise), and Spanish-inspired sandwiches (you can also take away), such as a chorizo burger with paprika salsa, a pork-and-veal albondigas (meatball) hotdog, and a grilled-chicken bocadillo (baguette).

The wine is from Spain, with plenty by the glass – all served at pours of 120 millilitres rather than the standard 150, which Dilernia says was introduced so people might feel more inclined to try a variety (they range in price from $8 to $14). Sangria is also available on tap.

Boque marks Dilernia’s fourth venue and he says it’s been a long time coming. “I’ve always wanted to open up in Haymarket. The big difference between that part of the city and the northern part … is that around 9pm it’s dead, but around Chinatown it hums until midnight.”

This article first appeared on Broadsheet on August 26. 2019. Menu items may have changed since publication.