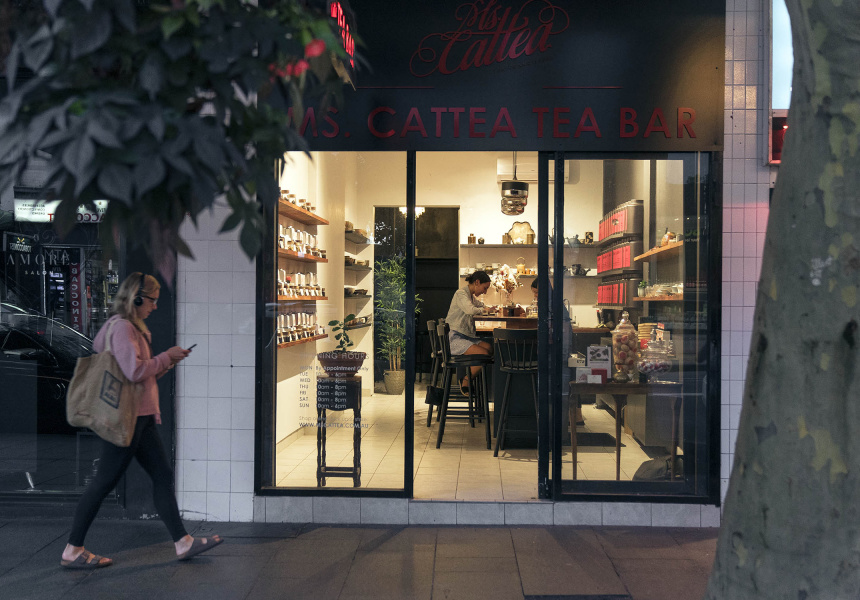 Fifty teas are on the menu at Ms Cattea Tea Bar – every one sourced from small farmers around the globe and brewed to perfection by founder and tea expert Cathy Zhang.

“I’ve been planning the tea bar for years,” says Zhang, who’s been obsessed with the beverage since completing a Bachelor of Tea Science at the South China Agricultural University in the early 2000s. “It’s part of my mission to share good tea and tea culture with Australia.”

The Potts Point venue looks more like a sleek bar than a tea house, with dark timber, deep reds and splashes of black. The centrepiece is the counter and its rows of giant tea canisters, where you can pull up a high stool and order from either the “popular” or “adventurous” menu. Covering the walls are more tea blends in glass jars, which you can open and smell, along with handcrafted teapots from China and ceramics made in Newcastle.

While Zhang opened the store late last year, she launched the Ms Cattea brand in 2012 and has sold her tea online for years. She’s a professional tea judge at international competitions and runs the annual Sydney Tea Expo, operated a traditional tea house in China, and consults with businesses to create tea menus. Her aim along the way has always been the same: to introduce people to the nuances of tea and give them access to flavours and products they can’t get elsewhere.

If you feel like a smooth, floral, fragrant drop, order the Orange Osmanthus Oolong (an oolong tea blended with orange osmanthus flowers). Or, for a delicate, herbaceous sip, the White Peony Biscuit. “White tea is made with minimal human interference,” says Zhang. “The leaves are picked, then left to dry in the sun. That’s it. It’s popular in China for its complex flavour and health-giving properties, like antioxidants and amino acids. There are many myths surrounding its origins.”

The “biscuit” here refers to the way the tea is stored: in small, densely packed portions, rather than in loose-leaf form. Some come as “cakes”, too. “This technique causes new compounds to form, giving the tea extra flavour,” Zhang explains.

If you order something from the “popular” menu, it’ll be brewed and served the conventional way – in a glass pot. But those on the “adventurous” menu are served gongfu-style, meaning the leaves are infused not once, but eight times. Each infusion is said to impart a new dimension of flavour (plus, your tea never goes cold).

There’s a range of premium teas, including the 10-year-old Aged White Tea Cake, the Silver Needle (which is one of the most sought-after white teas in the world) and the Wild Mt Lapsang, a black tea that grows in remote, hard-to-access forests. Then there’s the impossibly cute Mandarin Pu’er — a dark, fermented tea that spends several years ageing inside a mandarin. It comes in 45-gram cakes ($35) or nine-gram mini cakes ($5) and has scents of citrus and wet bark that Zhang says transform into a marmalade-on-rye palate.

If you want to learn more about teas and how best to drink them, book one of Zhang’s workshops. On March 11 she’s hosting the Amazing Cheese and Tea Pairing Experience, a collaboration with nearby Penny’s Cheese Shop that’ll involve tasting five premium cheeses. On March 26, there’s Art Kintsugi and Tea Workshop, a three-hour exploration of the 700-year-old Japanese ceramic-repairing technique, where you can try a variety of teas and tea-infused snacks.