Tacos, a DJ Booth and a Natural-Wine Bottle Shop – The George in Waterloo Gets a Makeover

Food by Ghostboy Cantina, drinks by Drnks and fun times by the team behind The Duke reboot. 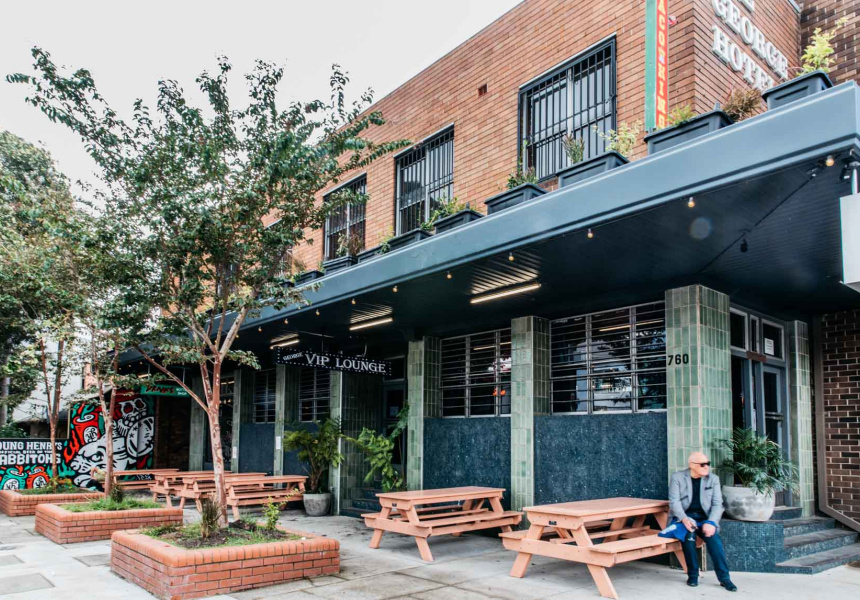 For more than 50 years, The George Hotel stood still as Waterloo and the surrounding inner south went through a massive upheaval. Through dense housing developments, gentrification and a slew of changes to the area’s nightlife, the pub’s green wall tiles, mosaic floor and beloved VB beer taps have held strong.

Only months after his return to the Sydney pub scene with the takeover and renovation of The Duke in Enmore, publican Jaime Wirth – who was previously behind the Drink’n’Dine empire, responsible for making over Petersham’s Oxford Tavern and Surry Hills’s Norfolk Hotel – once again collaborated with Ghostboy Cantina’s Toby Wilson and Drnks natural wine merchant Joel Amos to give Waterloo’s long-overlooked hotel a much-needed refresh.

“Even back when I had The Norfolk I had my eye on this hotel [to take over the lease],” Wirth says. “But nothing ever happened. Then, suddenly, it was like ‘You’ve got to open tomorrow’.”

When The George relaunched in April, 2019, there were few clues on the building’s exterior that anything inside had changed. Only two new signs – one for the shiny new Drnks bottle shop and another for Taco King – hint at what’s happening inside.

The bottle shop is the first bricks-and-mortar enterprise for the previously online-only natural and organic wine specialist. As well as offering a near-complete range of the wines found on the website, the Drnks retail outlet is stocked with a diverse range of other inebriants.

Instead of the traditional pub fare of schnitzels and burgers, there’s a Mexican diner in the pub’s sunny beer garden and enchantingly retro rear dining room. With Wilson in the kitchen, Taco King represents the fruition of a long-held goal for Jaime Wirth and co.

“We’ve been wanting to do a taco and natural wine thing for a while,” Wirth says,” and we were working on it as a standalone concept. When this came up, we decided to put that restaurant in here.”

While Wilson’s Ghostboy Cantina showcases a fusion between Central American and Southeast Asian flavours, authenticity is king at Taco King. The tacos, Wilson explains, are a response to the inauthentic scourge of mass-produced flour tortillas and “zig-zagged chipotle mayo” found in some Sydney pubs.

“The menu’s based on stuff I’ve eaten on my travels, particularly in Mexico City. It’s more personal to me than The Duke [where he also cooks],” he says. “It’s all the stuff I’ve been thinking about for the last few years.”

Headlining the menu is the Taco Al Pastor, a freshly made corn tortilla filled with pork neck marinated in a house-made adobo sauce, cooked slowly on a spit (the pastor) and shaved to order like a late-night kebab.

Then there’s the fish taco, which Wilson says is rarely done well in Sydney: “A lot of people get that wrong. We’ve gone really classic.”

Pieces of gurnard are fried in a masa flour batter (“it comes up really crispy and light”) and loaded into a warm tortilla with finely shaved cabbage and thin-cut radish.

But as with all of Taco King’s tacos, the sauce is where the magic truly happens.

“The biggest thing [other pub tacos] miss is a nice, fresh tomatillo salsa verde to bring the acid and heat,” Wilson says. “A taco should be a perfect mouthful of balance.”

Heat-seekers can also slather extra house-made salsa – available at a range of heat levels – at the salsa bar.

From the small kitchen, Wilson also slings a modest selection of quesadillas, tostadas and tortas (Mexican sandwiches). Snacks will include corncobs slathered with mayo, chilli, cheese and lime, and a mix of chilli peanuts and crisp pigs ears the team has christened Ears and Nuts.

For dessert, expect churros drizzled with cajeta, a dulce de leche syrup made with goat’s milk.

As for the time capsule-esque front bar, changes have been minimal. The caged TAB counter has been converted into a DJ booth, with the Lucky Jules sign that previously marked the entrance to the pokies room glowing above it.

Tap beers have been extended to include Young Henrys, Grifter and a range of craft beers – but regulars don’t need to stress, the Carlton Draught, VB and Resch’s haven’t gone anywhere.

While Amos says cocktails aren’t the focus of the bar, a small selection of Central and South American-themed drinks have been crafted to complement the food from Taco King.

Wines are available by the glass (“all natural, all organic but pretty stock-standard style-wise”), but a $20 corkage charge allows you take any bottle from the bottle shop into the dining area if your tastes are more particular.

“Natural wines are perfect for Mexican food,” Wilson says. “They’re light, easy to drink and they cut through the fat and salt in the meat.”

Lastly, there’s the jukebox. Wirth and Amos have changed 40 per cent of the albums to reflect their tastes. Pavement’s Crooked Rain, Crooked Rain is one of Amos’s contributions, while Wilson’s added plenty of ELO, Daddy Cool, Talking Heads and Lou Reed.