Josh Niland wants to make fishmongering sexy with the follow-up to his boundary-pushing seafood restaurant Saint Peter. Here’s how he’s doing it. 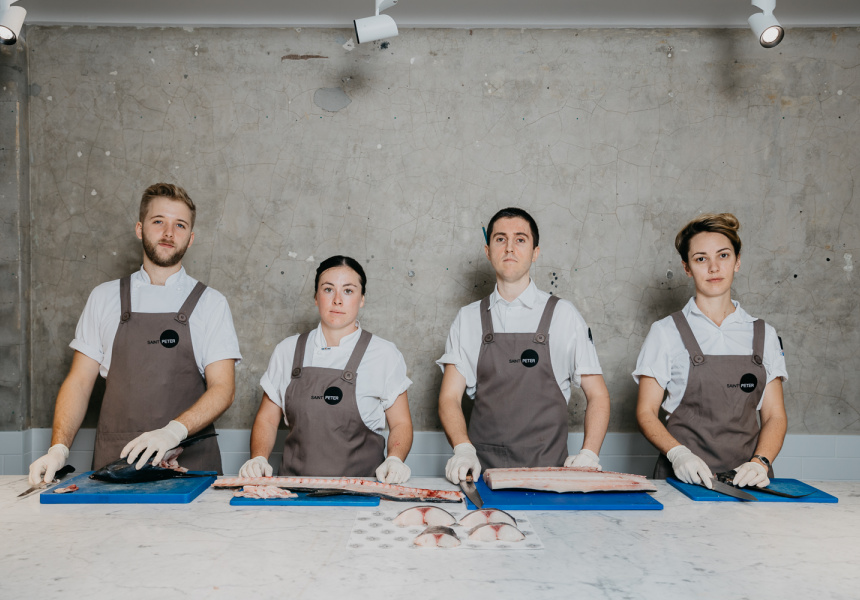 Josh Niland sounds nervous. It’s a surprise because since opening his seafood restaurant, Saint Peter, in Paddington in 2016, he has been given the same awards as high-end Sydney restaurants such as Momofuku Seiobo, Fred's and Ester. But this is different. He’s nervous because he’s unveiled a concept Sydney is entirely unfamiliar with: a fish butchery.

Critics might say his new retail concept is just a fancy fish shop, but how many dry age fish, sell ready-to-cook seafood offal and stock a constantly rotating range of fish most people have never even heard of? The answer is none.

Niland is also storing the fish in controlled-environment dry rooms to ensure the products never encounter moisture, prolonging their shelf life in the process. When customers choose what they want from the front counter everything's cut to order.

The idea for the Fish Butchery sprung from Niland’s desire to make fish mongering more sustainable and “sexy”. “Anthony [Puharich of Woollahra’s design-led high-end butcher Victor Churchill] has made meat sexy and glamorous, the same thing can happen with fish,” he says.

That much is clear as soon as you walk in. Julie Niland, Josh’s partner in life and business, has designed the shop like Melbourne’s Lune Croissanterie, which looks like a futuristic lab, all creative lighting, glass cube workstations and high-tech features.

At the Fish Butchery, everything centres around the glass display showing off the day’s catch and, behind that, a visible production line where Niland’s team will be doing the butchering (either gutting, deboning, chopping or packaging the order). Everything from garfish to flounder, sardines and striped trumpeter will be available, with a particular focus on lesser-known species to move people away from types that are over-fished.

The entrance – which aims to show exactly how alluring a fish can be – is framed on one side by a tall fridge with the brightest, biggest catches hanging like Spanish hams, and on the other by an eight-option rock-oyster fridge. There’s another fridge filled with Niland’s cured, smoked and cooked products (swordfish bacon, octopus ham and smoked-prawn sausages), and three timber shelves filled with custom-built fish tools, preserved lemons, chutneys and branded T-shirts.

“The idea is that everything will be pan ready; we will give you as much information [as you need] to do a great job cooking it, so that it justifies the price. And maybe when you get a bit of confidence, you might try some of the lesser-known species,” says Niland.

Two TVs outline prices, availability and the products not in the display case. That includes a selection of seafood offal and an up-market but still old-school takeaway hot-food section. “Originally it was going to be just fish and chips, but now I'm thinking of going into potato scallops, onion rings, prawn cutlets – all the things we grew up with, but made using produce that's high end,” says Niland.

There’s also a plan to one day sell fish in its freshest form – live – but that requires a lot of work to keep tanks clean and to process the catch. It also involves other logistical issues. “I've got a lot of emails [from people requesting] live fish and live prawns, but that's a beast; it’s unbelievably complicated. But yeah, we would like to do it here.”

“I'm also working on getting my own licence for the fish market auctions. Until then I'll be working [with Nicholas Seafood and] three or four individuals around Australia to give me a direct supply of fish to the door.”

The last thing Niland wants to do is alienate customers by looking too fancy and selling products they might not be familiar with. His goal is for the Fish Butchery to be an alternative to regular fishmongers. “I'm not going to try to flog blue mackerel to everyone who walks in the door. I know that's not everyone's cup of tea. We'll have a diversity of species and prices. We'll still stock King George whiting, John Dory and all those other beautiful fish. I want it to be non-confrontational.”