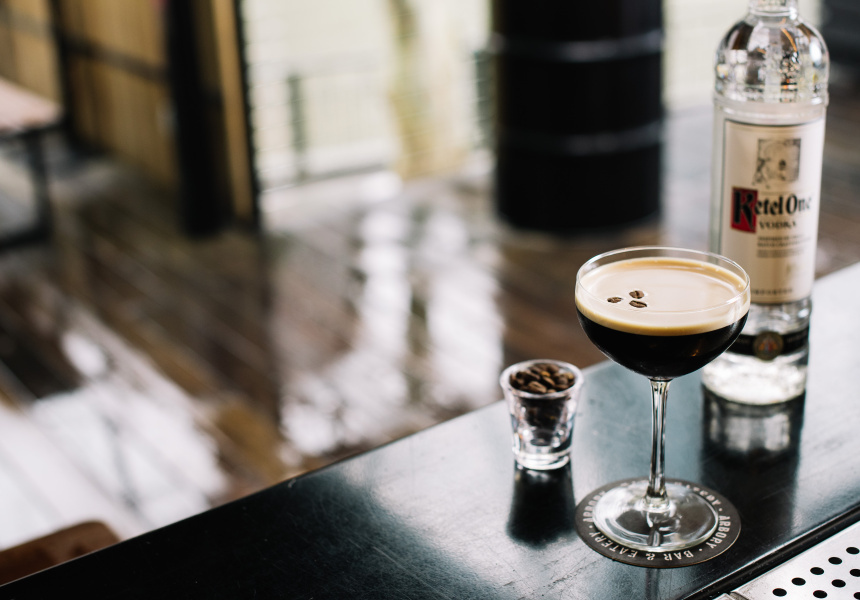 “I wanted to capitalise on something that we’re already really passionate about, espresso, and fill a niche in the market for a cool place to drink really good Espresso Martinis in the city after work and play a game of pool or table tennis,” says Sweeten from the bar’s bathroom, phone in one hand, drill in the other.

Tuxedo will be in what used to be the original Cadbury Chocolate factory in The Rocks, and it will retain all the classic elements of its former identity. The old elevator has been restored and the original materials have been used throughout the rest of the bar. It will be all Tasmanian and American oak, steel and lots of greenery. With a capacity for 200 people, it’s an ambitious venture. “I could have 10 Joe Blacks in this space,” he says triumphantly.

There will be six Espresso Martinis on offer, all with meticulously crafted coffee. The classic Espresso Martini will come on tap. Another is made with Cadbury Chocolate (referencing the building). It comes with melted chocolate, shards of shaved chocolate, chocolate liqueur and a shot of single-origin espresso. There’s also a Martini with cold-drip, filtered coffee infused with 666 Pure Tasmanian Vodka. The rum-based style uses Golden Rum, single-origin espresso, coffee liqueur and chocolate bitters.

In the future, Young Henrys will collaborate with the bar to come up with a beer-based Espresso Martini.

The name Tuxedo is in some ways purely practical. “We had a couple of weddings booked in for September and December, and I started thinking about the invites – they were going to say ‘Dead Man Walking’ [the bar’s original name] and I started to worry. So we decided to change the name last minute."

“You don’t have to wear a tuxedo, you can wear anything you want.”

The menu will be an extension of what’s on offer at Kansas City Shuffle, but with more sophistication. Southern fried chicken, beef brisket and smoked tacos will sit on the menu beside “super-food” salads. “We’re doing nourishing, dude food,” he says. “The stuff everyone wants.”

The wine list will include wines you can’t buy anywhere else in Sydney and Young Henrys craft beer will run on tap.