In the final instalment of our investigation into Sydney’s burger scene, we try peanut butter and jelly, Crunchy Nut Cornflakes, ramen buns and deep-fried cheese patties between two buns. There’s a burger on the menu at Bar Luca called the Juan Mac’n’Ro. Inside there’s a 200-gram Wagyu patty, two slices of semi-liquefied American cheddar, a Spanish-style barbeque sauce, chipotle aioli and chorizo-filled mac’n’cheese. Five years ago a mac’n’cheese burger might have been treated with considerable fanfare or bewilderment, but these days having mac’n’cheese, peanut butter, foie gras or even another burger inside your burger is no longer shocking.

Bar Luca is just one of a new wave of restaurants pushing the boundaries of what burgers actually are and what they have the potential to be. Despite criticism from burger purists, most notably Momofuku’s David Chang, and claims of marketing gimmickry, Bar Luca, Josh Arthurs (also known as Burger Josh), Chef’s Kitchen, Mister Gees, Pub Life Kitchen and the Dee Why Hotel have all gained loyal followings from their variety of unusual, inspired and sometimes absolutely monstrous burgers.

Bar Luca’s Juan Mac’n’Ro is part of a weekly series of special burgers. Other weeks have seen inventions such as the Cheezus, with a deep-fried, triple-cheese patty, and the Cereal Killer, with Crunchy Nut Cornflake-crumbed chicken, cereal milk and something called “suicide sauce”. Bar Luca’s head chef and co-owner, Sarah Robbins, says she’s been surprised by the incredible popularity of her weekly burger inventions.

Arthurs and Robbins say the recent surge is largely thanks to Fatties Burger Appreciation Society (FBAS). Every time the group posts a special on the FBAS page, Bar Luca will be greeted by crowds of Fatties members. “It’s crazy. It's been so good for us. I didn't know there was that kind of demand,” says Robbins.

FBAS moderator Zac Innes says Bar Luca’s and Josh Arthurs’ popularity isn’t simply down to novelty or social-media savvy. “Sure, some people will make a burger which is essentially a freak show, but some people do it out of a labour of love, and you can tell that they’ve put some real effort into the construction and the taste.”

Arthurs is one of those guys. “I've always liked making burgers, even before it was as popular as it is now. As a chef I'd always play around with American-style food,” he says. The first burger that brought him fame was the Primo, with American cheddar, house-made pickles, thousand island dressing and beer-battered onion rings between two milk buns topped with a jalapeño popper. “A lot of things went into the Primo. I spent about three weeks on it, every day making a different burger.” Arthurs says the fast-food tag attached to burgers means people underestimate the amount of work and care that goes into each burger. “They don't understand just how much goes into each creation. I'm sure the other establishments are the same.”

Robbins is another example. She and the Bar Luca team brainstorm burger ideas every Friday afternoon over a burger or two and a shot of tequila. “We do take it very seriously and we put a lot of thought into it. We test it ourselves. We all taste it and figure out what it needs.” Robbins is clearly confident in the taste and quality of her burgers, but we asked her if she thought some customers were coming in for novelty and social capital. “Yeah, big time. People use us to promote themselves on Instagram,” she says. “When we did our all-star week, we did our five most popular burger specials, one for each day. Those people were coming in every day just to say ‘I've had it,’ or put it on their blog.”

Arthurs says the Fatties machine and social media put pressure on chefs to differentiate their product even further. “You have to go to those lengths, man, to make it more special than what someone else is doing.” The other part is the shareability of his burgers. Arthurs knows his won’t just be seen by whoever’s eating it, but also by half their social-media network, and most of the 20,000 Fatties members. “Everything is made based on people taking pictures of them. The way I build them is designed to be visually appealing. Fatties plays a big part in that.”

It’s easy to be cynical hearing chefs talk about the marketability of a burger with a jalapeño popper or mac’n’cheese inside, and maybe there are burger joints trying to abuse the trend, but the reality is: Arthurs and Robbins simply love making burgers. “It shouldn't be treated any different to a steak. It's still an awesome cut of meat, the fact that it’s ground doesn’t change anything – we still treat it the same, we season it, cook it the same, we give it the same respect you would for a $30 dollar steak,” Robbins says.

Read Part 1 of our Burger Revolution series: The Beginning. 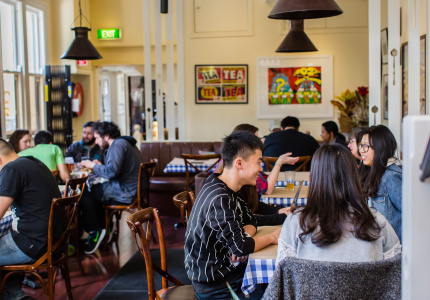