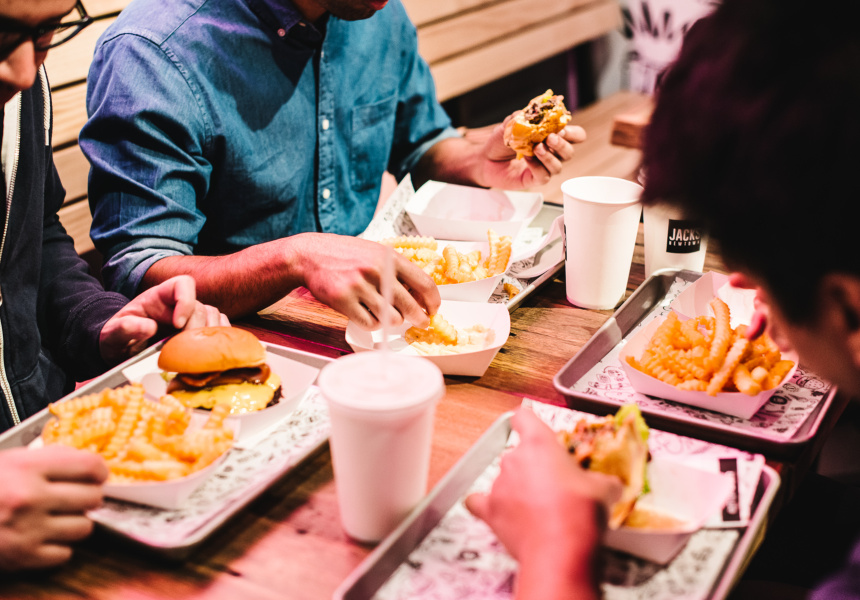 Jacks Newtown has been open a week. Last Saturday it had to turn people away because it had run out of product; not because it was disorganised, on fire or naively undersupplied, but because it had already developed a reputation. Somehow, (probably due to Fatties Burger Appreciation Society), word got out that its burgers were like those at Shake Shack. It’s been full ever since.

The cult US burger chain is famous for three things: soft one-handed burgers, frozen custard desserts and milkshakes. That’s pretty much exactly what Jacks Newtown sells. “It’s definitely inspired by Shake Shack and some other US burger places. I have a massive respect for Shake Shack.” Jack Fonteyn is the new burger restaurant’s owner. He says the other major influences for Jacks Newtown were Denver-based Smash Burger and New York’s all-vegetarian Superiority Burger.

Jacks Newtown only serves two kinds of burgers: a cheeseburger, with optional bacon and onion, and a vegetarian burger. The cheeseburger is visually reminiscent of Shake Shack’s and has the same general structure: two ends of yellow-tinted medium-soft buns filled with a layer of molten cheese, sauce, a juicy patty, lettuce and tomato. And of course, salty crinkle-cut chips.

The major difference is the sauce and meat. Fonteyn worked with Vic’s Meat’s Anthony Puharich to develop a specialised patty with the perfect 80–20 per cent meat-to-fat ratio. “He's by far the best in the business, I think. He worked out a blend that he thought would work. It's probably the best meat patty there is in terms of quality and taste,” says Fonteyn.

The sauce is thick, mildly tangy and more savoury than its mayo-like appearance suggests. Fonteyn wouldn’t tell us exactly what was in it – he simply said it’s made by a really intelligent friend of his. For now it’s just on the two burgers, but Fonteyn says he wants to serve it over his chips with cheese, a small embellishment on a refreshingly simple menu. Aside from the burgers and chips, the only other things on the menu are sodas from The Soda Press Co and frozen custard. We had our custard blended into what is probably the only choc-hazelnut milkshake in Sydney that doesn’t have Nutella in it. That’s far from a criticism, though. It’s luscious and strewn with custard globs and semi-melted chocolate chunks.

Like the menu, the fit-out is similarly uncomplicated. Besides a back wall mural and a neon burger plaque by New-York-Sydney artist Dave Homer, it’s essentially just a counter, a set of wooden benches and wide-open glass frontage. “The facade is so Newtown, I love the open windows I wanted to keep that the same,” says Fonteyn, who designed the shop himself.