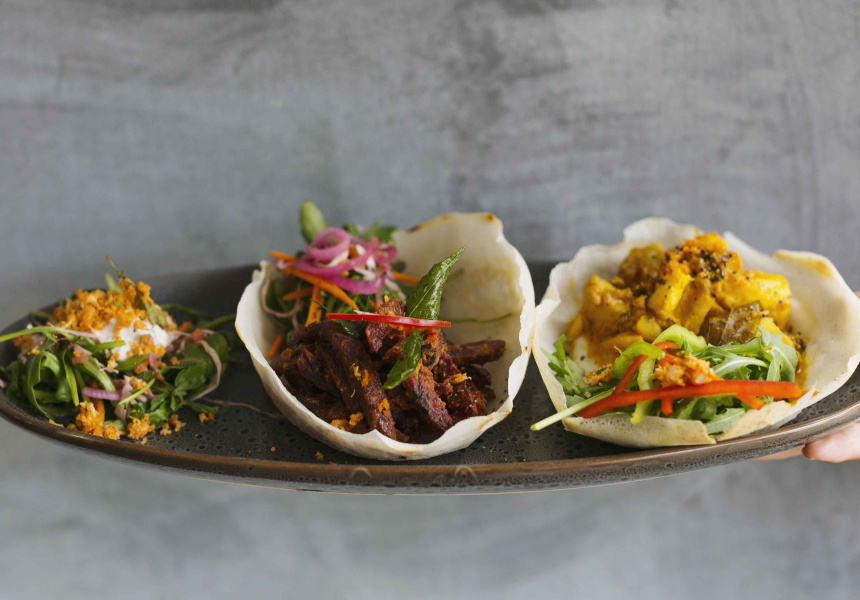 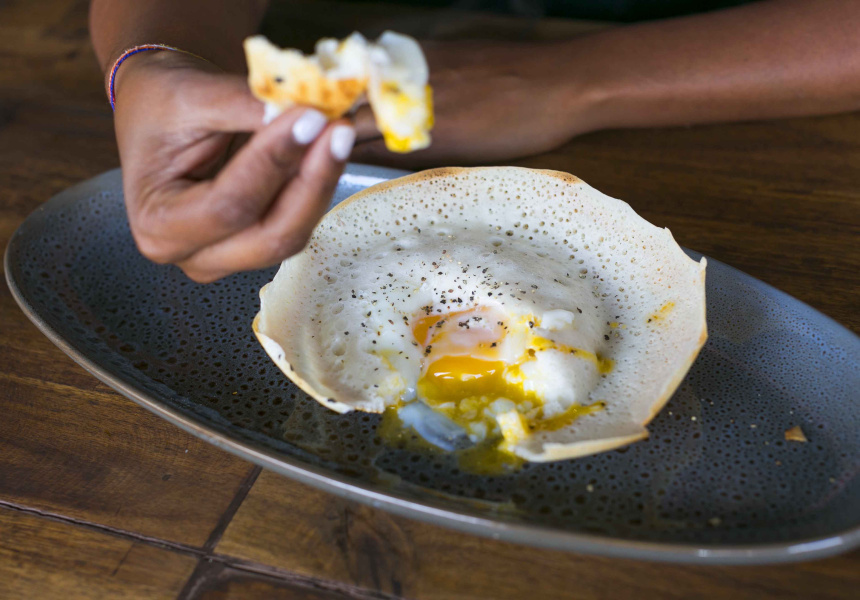 Although Hopper Kadé translates to “hopper shop”, it’s only now the owners can officially claim to have one. “We did the market circuit for two years to test the concept, to see if people were interested in Sri Lankan food. We had no idea there would be so much demand,” co-owner Ruvanie De Zoysa says.

Hoppers are Sri Lanka’s bowl-shaped answer to pancakes. Mainly eaten at breakfast, the crisp dish is made from a batter of fermented rice flour and coconut milk and eaten with fillings such as curried meats and fish; spicy coconut sambals; and a fried egg. Darlinghurst’s Hopper Kadé is all about them.

At the height of the business’s popularity De Zoysa and partner Chris Goffin were running three market stalls across Orange Grove, Moore Park and Kings Cross. “A permanent spot was always in the works, so we decided to try a pop-up at the Tramsheds,” she says. “I can’t tell you – the foot traffic, it was a baptism of fire.”

De Zoysa says the intense flavours of traditional Sri Lankan food can be confronting for an “uninitiated palate”, so her dishes take Western ingredients and combine them with Sri Lankan flavours. The Lankan-spiced pulled pork and 12-hour slow-cooked beef brisket are decadent and flavourful. There’s also an excellent fish special, made from whatever firm-fleshed white fish is tastiest at the markets. It’s served in a yellow curry with a spicy chilli paste and a stack of pickled cabbage, which is the perfect palate cleanser for the spicy fish.

There are also share plates, such as the crisp chicken served with a sweet and sour date and tamarind sauce. “I love the idea of community and having a bit of food for everyone to share – Sri Lankan food is geared towards that,” says De Zoysa. “It’s about the mix of flavours; you wouldn’t eat one dish on its own.”

For now Hopper Kadé is BYO, but there are plenty of drinks on the menu, such as the mango lassi. Made with thickened yogurt, mango pulp, mango essence and a secret blend of spices, it’s thick, refreshing and a good foil for the spicy food.

Hopper Kadé is simple and charming. There’s theatre in the front window where hoppers are cooked over flames in round metal bowls called appochetty. When it’s busy the space has a warm buzz, owed in part to De Zoysa’s affable, chatty personality.

The restaurant is part of Sydney’s burgeoning Sri Lankan food scene. A second Dish opened in Glebe recently, and O Tama Carey’s Lankan Filling Station is planned for around the corner. “I know O Tama, we talked about how great it is that Sri Lankan food is coming into the mainstream. The more Lankan places there are, the better,” says De Zoysa.