She visited some of the city’s most popular diners, including Bennelong, Rockpool and Lankan Filling Station, while they were empty. This is what she discovered. 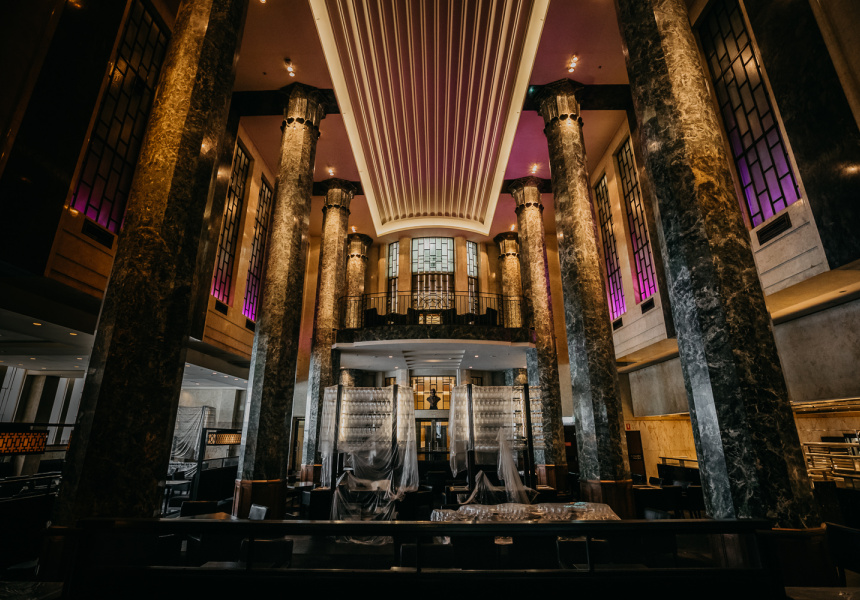 Bennelong restaurateur John Fink plays guitar inside the empty shells of the Opera House restaurant. Neil Perry sits in the cavernous Rockpool Bar & Grill dining room surrounded by sheets of plastic instead of diners. And Lankan Filling Station’s O Tama Carey stares defiantly at the camera, her restaurant full of cardboard boxes for takeaway. These are some of the scenes from Sydney’s restaurant closures during lockdown, captured by photographer Nikki To.

“One night I was thinking, this is such a crazy time, and there would just be so many empty, deserted restaurants lying dormant in Sydney,” says To, who has spent years shooting Sydney’s top restaurants, including for Broadsheet. “And then the next day, I was talking to Lennox Hastie from Firedoor. He was like, ‘There’s so many empty restaurants around, you should shoot them.’ And I was like, that’s so weird. It must be a sign.”

To began her photographic series of Sydney’s shuttered restaurants, which she’s named Hours Unopened, by shooting Hastie. She’s also captured Greek restaurant The Apollo, mezcal bar Cantina Ok! and Cafe Paci among others. Each shoot features the venue’s chef or owner, alone in the closed restaurant. Hastie is shown sitting in his empty Surry Hills restaurant, the woodfired oven he usually cooks with extinguished. Carey’s narrow Darlinghurst eatery, usually buzzing with customers, is quiet and instead filled with takeaway boxes and the pantry items she was selling during lockdown.

“I guess [taking the photos] interested me from an architectural perspective,” To says. “Thinking about somewhere like Bennelong or Rockpool, the grandeur of it all. They’re such crazy big spaces. I just started with the spaces. But then I realised it’s important to have a human aspect to it. I can’t shoot the whole restaurant team, so I’d just shoot someone.

“O Tama’s one really strikes me. She’s got her little space turned into a takeaway, with all those boxes and fridges and everything, and that really speaks to me a lot. Which is what happened to everyone eventually; if they turned into a bakery, their space became a bakery. The spaces were whatever stage they were at.”

As co-owner of Buffet, a Sydney creative agency that works with hospitality venues, To was on the lockdown trajectory with her clients, from reduced capacity to complete closure, then takeaway and back to reopening again. She says the most emotional shoot was with Jonathan Barthelmess of The Apollo, whom she’s known for years.

“I was sitting in the space with him that day, when normally it would be bustling and they’d be getting ready for service, and people would be starting to line up at the door,” she says. “It was cold and empty, and I felt sad.

“I went back and shot them a few weeks later, when they started doing takeaway. I didn’t want the set to just be of [the empty restaurant], because it’s so sad. They definitely moved forward, and now they’re opening again. I wanted that to be the story.”

To says it was important for her to show that the restaurant owners and chefs were fighting back. “Normally I’m shooting someone for a reason, for a portrait to celebrate a new opening. For this, it was quite a sad photo; I wanted them to exude some sort of resilience. It was the worst time ever, but they were still pushing through it. It wasn’t like anyone I had shot had given up.

“There’s this sense of strength in their portraits that I hope becomes more amplified looking back when restaurants are starting to open.”

Hours Unopened can be found on To’s Instagram page.