A Newtown diner filling the Happy Chef-shaped hole in locals’ lives, Chiko-inspired spring rolls in the inner west and an inner-city rooftop bar gets an art deco update. Happy Belly fills Newtown’s Happy Chef gap
Maybe it’s the suburb’s relative proximity to Haymarket, Ashfield and even Burwood, but Newtown’s Chinese-food scene has mostly been limited to the odd dumpling eatery – and Happy Chef, the local institution that burnt down in 2018. That makes Happy Belly a welcome addition to King Street. The menu features classic dishes including hot-and-sour soup; mapo tofu; and crispy, twice-cooked Shandong chicken with rice. There’s also a shredded-chicken salad with wasabi dressing topped with flying-fish roe, a popular Hong Kong dish. While the focus is on quality food at reasonable prices (the lunch specials are just $12.80), the chefs also add a playful touch to some dishes – such as the custard “mushroom”, which appears to be an oversized shiitake mushroom, but is actually a dumpling filled with a turmeric-yellow, eggy custard.

12 Taps champions independent Australian brewers
12 Taps owner Marco Vargas says it’s tough for small breweries to get tap space in Sydney. His Glebe venue, plus the recently opened Kings Cross taphouse and an imminent Marrickville spot, give small craft brewers the spotlight, with six breweries onboard as permanent partners, as well as a rotation of “gypsy” or contract brewers (that is, small outfits that hire equipment at existing breweries to create their beer). At Kings Cross, Parramatta’s Riverside Brewing Company is on tap along with Lord Howe Island Brewing Co, Quakers Hat Brewing from Manly Vale and Reckless Brewing, a mostly female-run brewery in Five Dock. While the focus is on delicious, approachable beers, Vargas reserves two taps for what he calls “funky beers”, such as marshmallow or peanut butter. The menu is as considered as the brews, featuring beer-friendly tapas from Vargas’s native Peru. There’s chicharrones (crisp pork rinds), yuca frita (fried cassava root), empanadas and Peru’s national dish, ceviche. For non-beer drinkers, 12 Taps also has an all-Australian spirits list, as well as wine.

Beast & Co brings Eastern European cuisine to Surry Hills
At Beast & Co, owners Petra Kanalosova and Jakub Kosik have taken the meat and root-vegetable heavy, saucy Bohemian (Czech) food they grew up on and adjusted it for the Sydney climate and palate. That means roasted cabbage brightened with pickled summer fruits, mustard greens and miso butter; twice-cooked chicken breast balanced with kohlrabi and corn; and fennel, apple, black beer and honey to cut through the richness of crispy pork belly. There’s also a nod to a Czech childhood favourite: a doughnut served with plum chutney, mascarpone and fresh berries. Pilsner Urquell is the centrepiece of the beer menu and it’s served the Czech way: in a clear, cold glass with plenty of foam.

China Diner opens in the inner west
China Diner’s new eatery at Tramsheds in Forest Lodge is putting a light, contemporary spin on hearty Cantonese fare. Five-spice duck pancakes are made with lean, crispy meat; a vegetarian san choi bao swaps mince for almonds and vegetables; and chicken and sesame “chiko” spring rolls are served with blood-plum sauce. The restaurant, which has sister venues in Double Bay and Bondi, also has a dedicated dumpling master churning out dim sum such as soupy xiao long bao, jade dumplings, prawn and water chestnut har gow, and crispy-pork bao with apple and carrot kimchi. Banquet menus (from $44) are excellent value and there’s a plant-based version alongside more traditional options. Have a cocktail on the pretty terrace with a view of the park and you’ll feel miles away from the bustling food precinct.

The Taphouse gets a terrace bar above the Darlinghurst rooftops
For a city with such great weather, Sydney is curiously light on rooftop bars. Darlinghurst pub The Taphouse’s rooftop bar is one of the few in the area – and it’s recently been given a refresh and a rebrand as Elm Rooftop Bar. The fit-out is sympathetic to the venue’s 1920s heritage, with subdued colours, marble, rendered pale-grey walls and plenty of greenery. The drinks menu is extensive, with 20 local independent craft beers on tap alongside cocktails and seltzers. The menu has plenty of pub classics, such as chicken schnitzels and parmies (plus a vegetarian, eggplant-based version of each), as well as burgers, fish tacos, Southern-fried cauliflower and a charcuterie board. 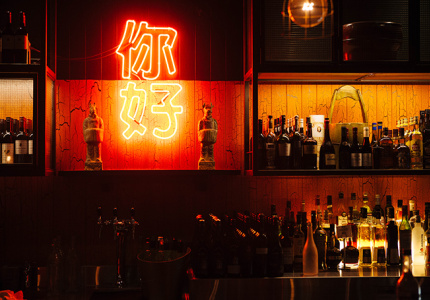 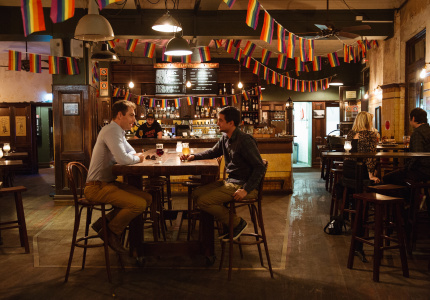