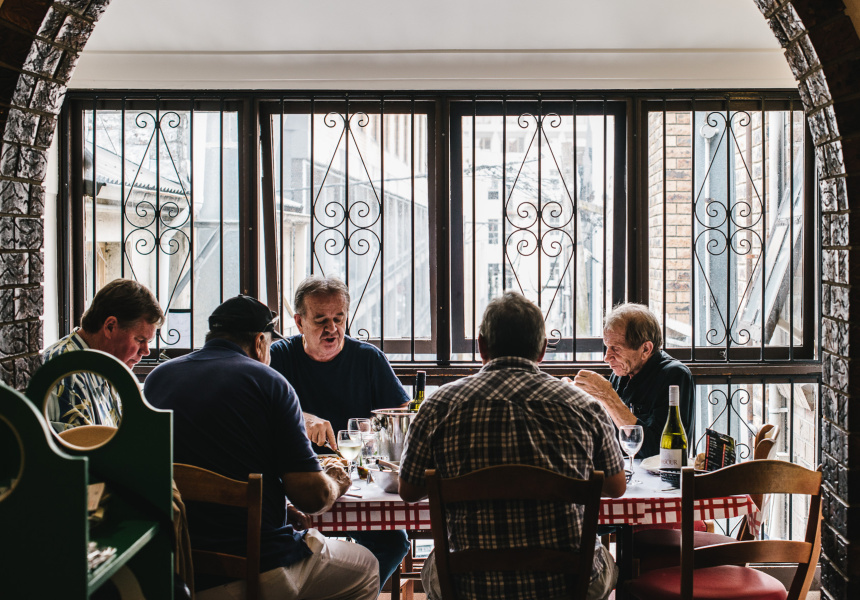 If there were a “Godfather” of the restaurant scene in Sydney’s original Little Italy, it would be Bill & Toni’s. Open for more than 40 years on Stanley Street, the restaurant’s humble menu hasn’t changed since first opening in 1965. All the crowd-pleasers are there, including a spaghetti bolognaise nonna couldn’t fault, and its locally famous schnitzel and cheese. Giant meatballs, lamb shanks and osso bucco are also popular, hearty choices. If the carafes of complementary orange cordial don’t suffice, the option of BYO is available with no charge for corkage. “We believe eating dinner here needs to be affordable for everyone. Let the customer have the choice,” explains general manager Claude Tropea.

The interior has barely changed since day one. Aside from a good clean-up, a fresh lick of paint and a couple of new kitchens, Bill & Toni’s still has its 1970s charm firmly intact. Seats are scattered on the pavement out front, usually occupied by Italian gentlemen sipping espresso. Tables on the balcony upstairs are still coveted seats, while the original pinball machines downstairs are relics of decades gone by.

Originally from Sicily, Bill Chiappini learned to make a mean cup of coffee in Kings Cross. After his boss lost his cafe in a poker game, Chiappini – then unemployed – decided to open his own coffee shop in 1965, which he named San Siro Coffee Lounge. As the Baby Boomer generation hit the scene in the ’70s, lifestyles changed and eating out on became more common. To keep up, Chiappini opened a restaurant above his coffee lounge. He sought help from Toni de Santis and Adolfo Fasciani. Both were originally from Rome and were working in the kitchen of a nearby restaurant. They began serving inexpensive, traditional, and above all, from-the-heart, cuisine upstairs. Their new venture was instantly popular. “Both Bill and Toni have unfortunately passed away, but their legacies remain. Bill was a gentleman. He was charming, suave and very elegant – typically very Italian,” explains Tropea. “Toni was a people’s person – always welcoming and passionate about ensuring that customers were happy.”

Today, Robert Domabyl, a long-standing customer, owns the restaurant after taking it on in 2013 with the help of Tropea, who also started out as a customer. As new restaurants and cafes continue to pop up around the 1960s venue, the question is, why do people still choose Bill & Toni’s?

Husband and wife Brian and June Hicks have frequented the restaurant for 23 years. “What keeps us coming back is the coffee (always hot and strong) and the variety of food choices – what you pay for is what you get in terms of quality and economy,” says Brian. And for a couple who have most likely tried everything on the menu, they can never go past the vegetarian focaccia, a passionfruit muffin and of course, a couple of lattes.

Paul Bailey is another regular who's been going to Bill & Toni’s for 34 years and insists it’s the warm atmosphere that makes it his local. “Bill & Toni’s isn’t just about the food … it’s about how the staff [the core of which are long-term] make you feel when you’re there … it has a real community feel about it and it’s as though I’m eating among friends,” he says.

Kevin Connor is an Archibald Prize winner who won in 1975 for The Hon Sir Frank Kitto and in 1977 for Robert Klippel. When he’s not painting, Connor often finds himself sitting around a table with friends in the relaxed restaurant, and has done so for the past 20 years. “My fondest memory at Bill & Toni’s is sitting on a winter’s morning around a table with my Australian-Italian friends and others from all corners of the earth, drinking good coffee, shooting the breeze and putting the world into shape,” he says.

There’s no doubt Sydney has changed since 1965, but there’s one humble Italian place on Stanley Street that’s stood the test of time by staying true to its roots.