We toast an intergalactic Newtown bar that’s big-upping the Martini, pair brews with prawn toast at an inner-west warehouse devoted to a former PM, and sip classic cocktails beneath a 400-tonne clocktower. Here’s why it's been an outstanding six months for Sydney’s drinks fans. Opening a bar in 2022 Sydney isn’t exactly plugging a gap – trying to find a good spot to drink in Sydney is almost as easy as trying to find sand on Bondi Beach. But, like buttery mashed potato on top of a meat pie, the best of the city’s new bars are making something great even better.

So far this year, a new warehouse brewery is taking the concept to the next level (while somehow involving a former PM), and an intergalactic bar devoted to the Martini has opened. There’s a sake bar jazzing up Newtown’s King Street with its thousands-strong record collection and terrific snacks, and a northern beaches newbie with a killer natural wine collection. Each of them offers something a little bit different to Sydney’s drinking scene, and builds upon what we already have.

Here are Broadsheet’s picks for the best bars of 2022, so far. And check out our favourite restaurant openings of the first half of the year here.

Ante, Newtown
We could have easily included this outstanding bar in the best restaurant openings of 2022 so far; co-owner Jemma Whiteman (Pinbone, Cafe Paci, Lankan Filling Station, Billy Kwong), who makes the kind of food we want to eat all the time, builds a solid argument to visit just to dine. But Ante is modelled on the Japanese “jazzu kissa” concept, a jazz cafe or bar where customers come for both the records and the drinks, and Whiteman’s food not only complements the cocktails and sakes, it encourages enthusiastic sipping. Think creative pastas like gnocchetti with prawn and pickled clementine (clementine!), or a bonito crudo with burnt honey and shiso. Ante is pouring some of the world’s best sakes, curated by the other owner, Matt Young. His Black Market Sake is one of Australia’s leading importers of junmai (pure rice) sake, and Ante lets you explore this fascinating and immensely delicious world, with more than 60 options open to try. Young has put a lot of effort into creating an atmosphere that transports you from bustle of King Street, and thanks to clever soundproofing, you can enjoy one of his 2500-plus vinyl records and still have a conversation. Ante is a well thought out and executed bar, and we can easily see this Newtown joint be added to our best Sydney bar list of all time.

Bar Planet, Newtown
The team behind laneway Margarita bar Cantina OK hasn’t rested on its laurels since being named the 23rd best bar in the world by The World’s 50 Best. Instead, earlier this year at its new venue Bar Planet it switched gears to focus on another drink: the Martini. Bar Planet’s version (dry, and crafted using a bespoke spirit from Marrickville’s Poor Toms) is poured from on high from porrons (large Spanish carafes) by enthusiastic bartenders, then deftly garnished with an olive. If you prefer yours a bit dirtier or wetter, you can have a Martini made to order as you please. As behoves a venue called “Bar Planet”, the space itself is an interstellar acid trip; the terrazzo bar top has been custom-made by Australian artist David Humphries and is embedded with cut-outs of stars, galaxy-like spirals and sprawling suns, while black lamps with squiggly stems arch over the bartenders from the back wall. The overall impression is like stepping into an art nouveau-era bistro that’s been installed on the moon. We rate it.

Banco, Manly
The neon-lit wine bottle hanging out the front of Banco hints at what lies in wait: a 300-bottle selection of natural wines, from Australian and international producers, that’s arguably one of the biggest collections on Manly’s side of the harbour. Banco’s owner is Kurtis Bosley, who owns Corretto in Dee Why. He knows his drinks, and there are plenty to choose from here. Turn over to the cocktail menu for a couple of options, including a Gimlet, available on tap. There’s also a solid selection of cocktails made to order, plus you’ll find beers and a non-alcoholic G&T with locally made Seadrift spirit. In a nod to Manly’s big English population, there’s an excellent British-tinged food menu that is the perfect foil to a drinking session. Snack on a Scotch egg with curry mayo, or dig into a Madras pie made with Wagyu, a nod to England’s popular curry houses.

Clocktower Bar, CBD
This bar tucked discreetly within Shell House was technically a 2021 opening, throwing open its doors at the end of last year. But it’s been somewhat overshadowed by the launch of the venue’s other spaces, so we wanted to give it the attention it deserves. It gets its name from its location under Shell House’s 400-tonne clocktower, on level 9 of the sky-high venue, and if you look up you can see the restored timepiece overhead. The bar is partially hidden behind sliding doors, but when you enter you feel like you’ve stepped onto the set of Mad Men – it’s a mix of plush red velvet chairs, sexy lighting, marble tables, beautiful timber walls and a bar that encourages the ordering of stiff cocktails. The cocktails are well made and the snack game is strong, and you can even go large and add a tin of caviar to your order. Ironically, Clocktower Bar is the kind of place where you lose your sense of time. Another drink? Why not.

The Bob Hawke Beer & Leisure Centre, Marrickville
“Another warehouse brewery? In Marrickville?” we hear you cry. Well, yes. But this isn’t anything like the other Marrickville warehouse breweries. It’s an homage to its namesake, beer-swilling former PM Bob Hawke, who was a partner in the brewery before he passed away in 2019. A floor-to-ceiling photo of the big guy, shirtless, is right there as you walk in. And that’s just the beginning. The whole space is decked out with interior trends that hark back to his ’80s heyday. The walls are wood-panelled, brown vinyl abounds and oriental-style rugs dot the floors. But it’s not all about looking to the past. Hawkes’ very of-our-time crafties are on tap, and you’ll also find natural wines and a good range of cocktails as well. The brewery even has its own Chinese restaurant, Lucky Prawn. Headed up by Cicciabella’s former head chef Nic Wong, it’s a mashup of your local RSL and the quintessential ’80s-era Australian-Chinese joint found in regional towns across the country, complete with ornately decorated red carpet, lazy Susan tables and paper menus with a hitlist of classics: sweet-and-sour pork, prawn toast and sizzling beef. The pièce de résistance of the place – a room dedicated to Hawke’s legacy, created in collaboration with his daughter – is out the back. Modelled on Hawke’s pool room at his Northbridge home, it’s filled with memorabilia, photos and tributes. Current PM Anthony Albanese even visited recently to donate a pic of himself and Hawke. See, we told you it’s like no other brewery you’ve been to before.

Honourable mentions
We’ve always had a soft spot for Surry Hills’s Irish bar The Wild Rover, but we reckon its recent makeover has given it the renewed sense of energy it needed. Now called The Rover, it’s less speak-easy, and food is more of a thing. Don’t stress, the beautiful copper bar remains, and so do the railway timetable boards, but the drinks and vibe is more 2022. Plus, we love the tiny private dining room tucked in the corner. Here’s to another decade. 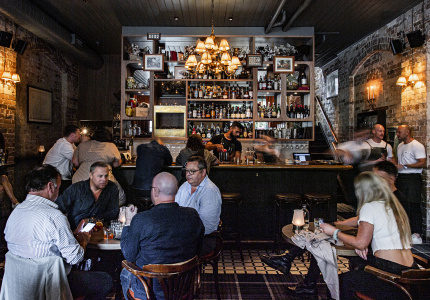