We’ve worked with some of our favourite cafes to create lunch dishes, in partnership with Philadelphia cream cheese. A new item from this Bondi deli wraps a traditional recipe in its sweet parcel. 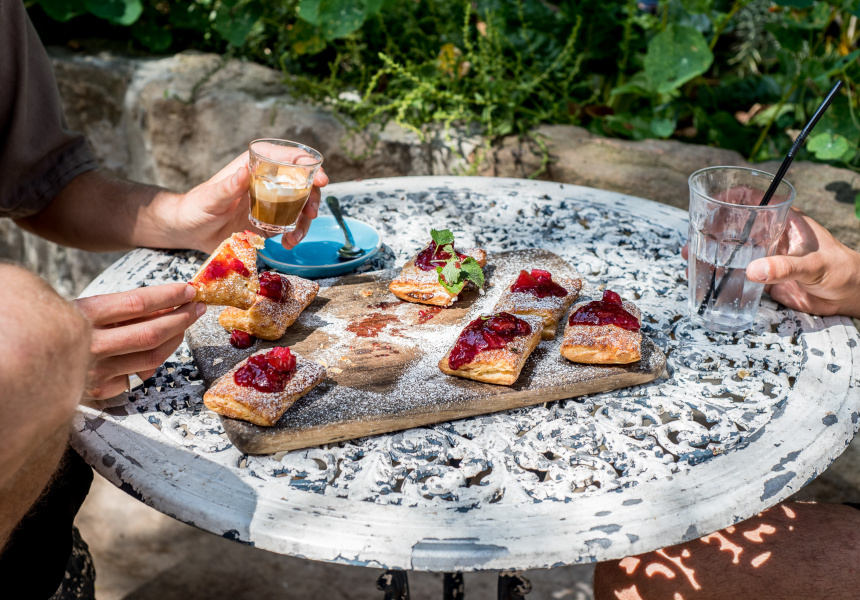 Since opening Bondi deli Lox Stock & Barrel in 2013, adaptation has been a key part of co-owner and chef Neil Gottheiner’s philosophy.

“We didn’t want it to be a classic 1920s menu,” says Gottheiner. “We thought, ‘If you were to build a deli now, what sort of things would you serve?’ There are nostalgic things like chopped liver and pastrami, and they’re great, but we want to offer a more contemporary version that’s made for the current climate.”

Now the kitchen is working to find new recipes to add to the cafe’s Eastern European/Jewish-American vibe.

Its latest is an adaptation of a Hungarian strudel. “It’s usually made with a leavened pastry, which has that nice chew,” says Gottheiner. “But I’ve used puff pastry to make it easier to do at home, and for extra flakiness.”

The filling of the sweet parcel is cheese. “I mix Philadelphia cream cheese with ricotta to mimic the traditional Hungarian cheese typically used,” says Gottheiner. “The Philadelphia works perfectly with ricotta, adding a smoothness and a slight savoury note. Then we fold through raisins cooked in white wine and sugar, lemon zest, cinnamon and vanilla. An egg yolk and a touch of flour goes in to keep the filling together and to give it a little extra puff.”

So far the parcels are being snapped up fresh out of the oven. “People are always looking for the right thing to have for a late breakfast or early lunch,” says Gottheiner. “These are a little sweet, but not overly, and make the perfect pairing with a cup of coffee. As soon as a batch comes out they go straight away.”

The Raisin and Cheese Parcel is available in-house for a limited time. Here’s how to make them at home.

Method
Simmer raisins, white wine and sugar until sugar is melted and liquid absorbed. Set mixture aside to cool.

Cut the puff pastry into rectangle shaped turnovers 7.5cm x 10cm. Fill each one with approximately 50g of mixture.

Garnish with stone-fruit compote and dust with icing sugar. Serve.

This article is presented in partnership with PHILADELPHIA Spreadable Cream Cheese. Featuring the signature smooth, creamy texture of PHILADELPHIA cream cheese, we've worked with some of our favourite cafes to design this limited-edition lunch menu item, available in-store now.